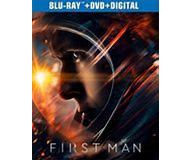 Universal Pictures Home Entertainment was kind enough to provide Hollywood News Source an advanced copy of the Blu-ray + DVD “First Man,” starring Ryan Gosling and Claire Foy. The 4K Ultra HD, Blu-ray and DVD will be available you to on January 22. Regarding the Space Race. I feel (sorta) confident that most high school graduates could tell you which countries were involved in the Space Race in the 1960’s. Some could even tell you the name of the first man to walk on the moon and offer up some paraphrase of his famous quote. (I performed a non-scientific test of this hypothesis with my teenager and he passed, so I’m feeling hopeful). However, the good news is, that even if these facts elude you now, after watching this movie you will be able to reliably provide any of these facts on demand. “First Man” is based on the true story of Neil Armstrong (Ryan Gosling) and it follows him and his family as they support him through one of the most dangerous missions in history. And seriously, this mission was crazy dangerous. I am completely honest when I say I am more amazed now then ever that anyone tried to get to the moon, much less got there. Having watched a lot of contrived dramatic space moments in other movies, it was especially humbling to realize that Armstrong faced the depicted dangers in real life. He was truly the right man for the job; by the end of the movie, I was in awe of him and that America made it happen. Here comes the review and as always, SPOILER ALERT (but really, it is based on history so my tiny “spoilers” can be found just about anywhere you care to look). The movie follows Armstrong from a first-person perspective. We get to know his wife (Foy, who was nominated for a Golden Globe for this role), his children and the other astronauts that live in his high-astronaut-count neighborhood. These families spent a lot of time together. The men were not just co-workers, but they were deeply entwined in each other’s lives. So, when the inevitable happens, such as the Apollo I disaster, it is not associates they mourn but part of their extended family. How events like Apollo I affected Armstrong, is the crux of the story of “First Man.” So many movies, good movies, have been made about the race into space and NASA and our astronauts. This movie differs because it delves into the lives of those astronauts, and Armstrong in particular. It is engaging and eye-opening to see the many challenges Armstrong had in his life and how he chose to deal with them. Those choices ultimately put him on the moon, but it is hard to say he handled things well. History tells us he is a hero and I absolutely don’t disagree but his personal life was full of painful moments I don’t think any of us would want to live through despite where they led him eventually. Did you see the movie on the big screen, or did you miss it? Either way, the 4K Ultra HD, Blu-ray and DVD is worth purchasing because of the extras. The discs come with some deleted scenes and nine bonus features. The bonus features alone, make the DVD worth it. They are mini features of greatness that give us the skinny on how such an epic movie about iconic historical characters and moments, is made. My absolute favorite was “Recreating the Moon Landing.” The feature described how the first moon walk was recreated and holy cow, it is awesome. I mean really, they recreated the moon. THE MOON! And it is not cheesy (pun intended). Using a combination of actual footage from the event and new footage shot for the movie the scene gives chills and makes you so proud of what America did 50-odd years ago. Another favorite was “Astronaut Training.” The actors went to a 3-day boot camp and got to play, I mean experience, the equipment and training apparatuses that astronauts use to understand the feeling of weightlessness, etc. They were able to see the actual Apollo 11 capsule to get perspective on the what the men they were portraying experienced. I have no doubt that it was 3-days of blissed out joy for the actors. I would pay big money to go to space camp and do all the things they did. This is a movie that I would not only let my kids watch, I might actually make them watch it (for reference, they are 13-15 and 17). I think I counted one curse word and there is zero nudity. No violence or gunshots or drug use. It is family friendly but might be considered slow for younger kids. Also, some of the themes touched on are tough and might not be for younger kids. There are moments of suspense and peril but only a few. Its all history so you can prepare yourself ahead of time by googling or you can be surprised as you watch how this amazing feat came to be. I know I’ve used a lot a superlatives in this review, but I am genuinely in awe. Most of this happened before I was born so, like you, I only learned about it in my history books. To watch it unfold on screen made me realize how special the entire journey was for the men/families involved and the entire country.

Purchase your copy of the DVD/ Blu-ray HERE!