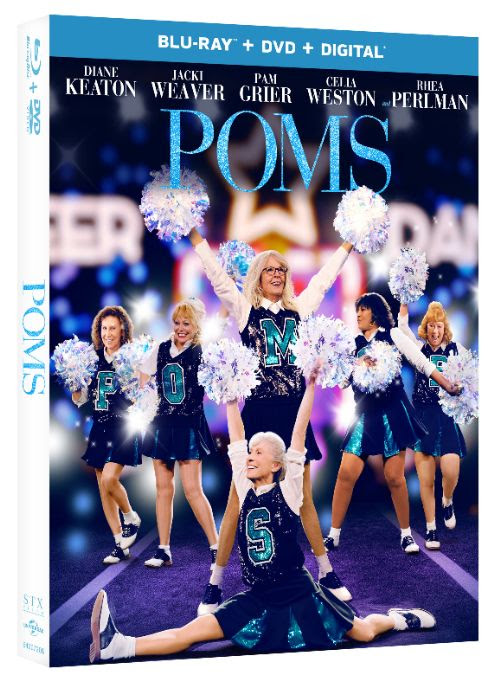 HNS received a DVD/Blu-ray/ Digital combo pack of the film ‘POMS’ to review. Check out all the details and our review below! And don’t forget to grab your own copy HERE! It’s never too late to show your team spirit in the uplifting comedy, POMS, arriving on Digital July 23, 2019 and on Blu-rayTM, DVD and On Demand August 6, 2019, from STXFilms and Universal Pictures Home Entertainment. Starring Academy Award®winner Diane Keaton (Book Club) and Academy Award® nominee Jacki Weaver (Silver Linings Playbook), the film follows a woman who revisits her passion for cheerleading, inspiring those around her to live life to the fullest. Full of humorous and empowering moments, POMS is an endearing comedy that will inspire audiences of all ages and have everyone cheering.

From the studio that brought you Bad Moms and the producer of Book Club, POMS is an uplifting comedy about a woman who forms a cheerleading squad at a retirement community. With an all-star ensemble cast led by Keaton and Weaver, the film features film icons Pam Grier (Larry Crowne), Celia Weston (The Intern), and Rhea Perlman (Sing) as the group of women who are determined to defy stereotypes while having the time of their lives. Filled with moving performances, POMS is a “heartfelt and hilarious” (Hollywood News Source) story with a profound message that it’s never too late to follow your dreams.

POMS is now available on Blu-ray, DVD and Digital.

Here is the breakdown of all the technical details – that I admittedly don’t fully understand, but I know is very important in a quality product.

TECHNICAL INFORMATION DVD:
Street Date: August 6, 2019
Selection Number: 64207180
Layers: DVD 9
Aspect Ratio: 16:9 1.85:1 Anamorphic Widescreen
Rating: Rated PG-13 for some language/sexual reference
Languages/Subtitles: English SDH, Latin American Spanish Subtitles
Sound: English Dolby Digital 5.1
Run Time: 1 Hour and 31 Minutes
Reviewer’s thoughts: I must admit first and foremost, that I am a little biased. We were quoted not once but TWICE on the back of the product! This is quite possibly the coolest thing a journalist can experience when reviewing a film. With that being said, I genuinely loved the film! I thought it tugged at all the heartstrings, made you root for a group of unlikely heroes and maintained a perfect balance of heart and comedy. You can read my full review of the film here: http://hollywoodnewssource.com/film-review-poms/
I received the DVD/Blu-ray/ Digital combo pack for review, and it is a great product if you’re a fan of the film – or if you’re a fan of heartfelt comedies but have yet to see the film, I’m confident you’d be very satisfied picking this up as well! I love that it is a combo pack. It’s really a 3-in-1 in terms of fully getting your money’s worth on a purchase. The combo pack includes a digital download code, a DVD disc, and a blu-ray disc. The artwork for the product is very pretty and also perfectly in align with the film itself (it’s a pet peeve of mine when the artwork isn’t really reminiscent of the film it’s trying to sell). In this case, it’s perfect. My one complaint here is that there are no special features on this product. That’s my favorite part of purchasing any DVDs or Blu-rays, and for whatever reason they’ve chosen not to include any special features. Even so, this product is still a great buy. I highly encourage you to pick up your copy today! You can purchase one for yourself HERE!