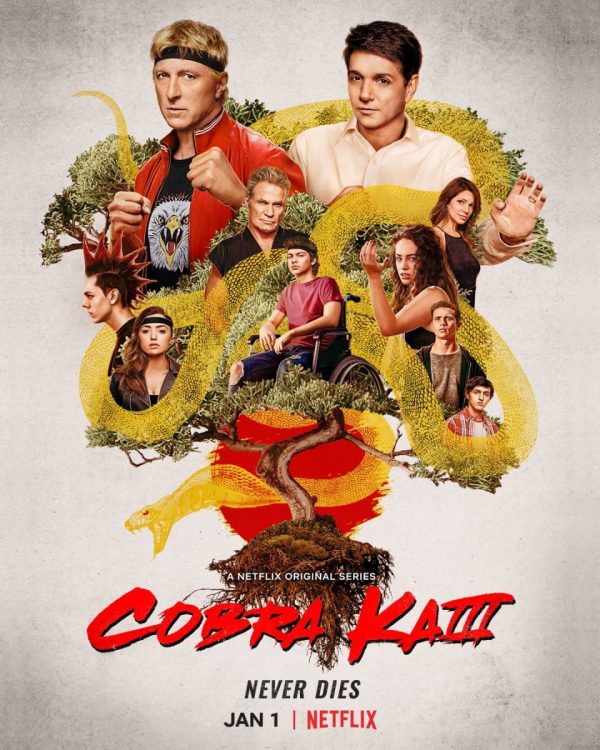 Cobra Kai returned on January 1st 2021 bigger, better, and with more momentum with it’s new home at Netflix. Since Season 3 premiered on the streaming service, it reached number 1 in both the US and UK’s Top 10 movies and TV shows. What started as an underdog cult worldwide hit series on YouTube and spin-off show from The Karate Kid movies, has become a bigger global phenomenon since Seasons 1 & 2 debuted on Netflix in the summer of 2020. As the rest of the world caught up on the nostalgia, heart, and well written characters that embodies Cobra Kai, it captures you with the right amount of charm. Season 3 deals with the aftermath of the events that led to the high school brawl that caused mayhem and chaos in the San Fernando Valley between the students of Cobra Kai and Myagi-Do, led by Johnny Lawrence (William Zabka) and Daniel LaRusso (Ralph Macchio) respectively. All Valley champion Miguel Diaz (Xolo Mariduena) is in the hospital injured in a coma from the fight supported by his mother Carmen (Vanessa Rubio) and Grandmother Rosa (Rose Bianco). He will not have to only come back and recover physically, but mentally as well through adversity with courage and spirit. Robby Keene (Tanner Buchanan), Johnny’s son and Miguel’s arch-rival , who attacked Miguel after their fight is now on the run from the police which proves to be the start of his own dark journey.

Samantha LaRusso (Mary Mouser) is going through her own trauma and version of PTSD, as she is still haunted by the events of the fight and the mental scars and fears she will have to confront with her father Daniel LaRusso’s (Macchio). Hawk (Jacob Bertrand) and Tory (Peyton List) are both still angered and vengeful after what happened to Miguel. This is mixed with their own insecurities to start to embrace the much darker aspects of Cobra Kai’s philosophy under the sinister watch and guidance of Sensei Kreese (Martin Kove), who uses this along with the other Cobra Kai students for his own agenda, to have complete control and to embody his motto of ‘Strike First, Strike Hard, No Mercy’.

The 3rd season explores the dark origins and past of John Kreese and Cobra Kai, along with the unexplored origins of Miyagi-Do and Mr. Miyagi (Pat Morita) that Daniel LaRusso was never aware of. That will help him balance family/ business life that will allow him to aide his daughter Sam, his wife Amanda (Courtney Henggeler), his students, and himself with these revelations. Johnny goes on another path of self-discovery, and confrontation with his past which will help him deal with recent betrayals in the only way Johnny Lawrence knows how – wit, persistence, charm, and at times, unintentional blunt humour. Cobra Kai balances the nostalgia from the 80’s, at times serious drama, good moments of comedy, and exploring characters points of view and proving everything is not simply black and white but has various shades of grey. It has self awareness that enhances what started with Karate Kid in 1984 and introduces a new generation for modern audiences in Cobra Kai today. This is managed by 3 massive fans of The Karate Kid Universe, the creators of this modern incarnation: Jon Hurwitz, Hayden Schlossberg and Josh Heald.

Cobra Kai Seasons 1, 2, and 3 are available to stream on Netflix.