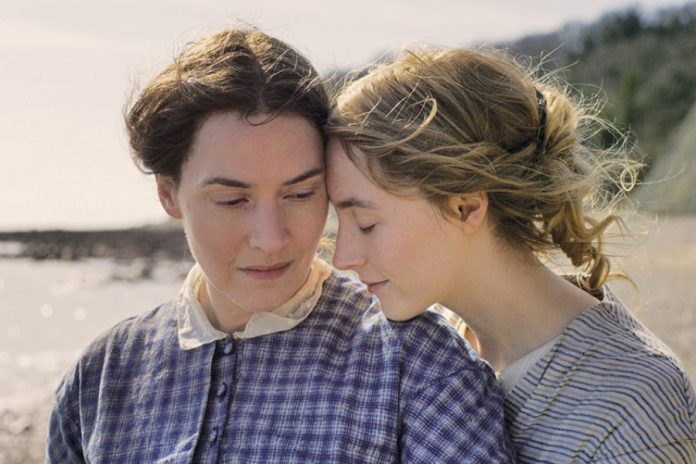 This film is not what you may have predicted from the previews.

Kate Winslet stars in this period romance alongside Saoirse Ronan. Winslet is Mary Anning – a fossil hunter whose discoveries allow her and her mother to barely scrape by in their humble seaside home. Ronan portrays Charlotte Murchison, a wealthy married woman whose husband enlists Mary’s help to care for her while he travels. Neither is particularly pleased with this arrangement, but Mary needs the money and Charlotte is depressed and in need of a companion. When Charlotte develops a serious illness the unlikely pair becomes inseparable.

Overall, the film earns a solid 3 out of 5 stars. As expected, both Winslet and Ronan are magnificent. Winslet in particular wins the heart of the viewer as the socially awkward, stubborn, and unconventional leading lady. The physical chemistry between Ronan and Winslet is undeniable. The pacing of the film is just right – as a period drama with very little dialogue, the run time of just under 2 hours keeps the viewer engaged as the story progresses. However, this film veers from the expected path with dialogue that lacks professionals of love from the leading lady. While the quiet affair feels authentic to the stony character of Mary, viewers may find themselves missing the dramatic monologues that are typical of a period romance.

AMMONITE is written and directed by Francis Lee. The film and is now available via streaming and on DVD and Blu-Ray, which includes behind-the-scenes footage of the making of the film with cast and crew. AMMONITE is rated R for graphic sexuality, some graphic nudity, and brief language.

Click HERE to get your DVD or Blu-ray copy of Ammonite!