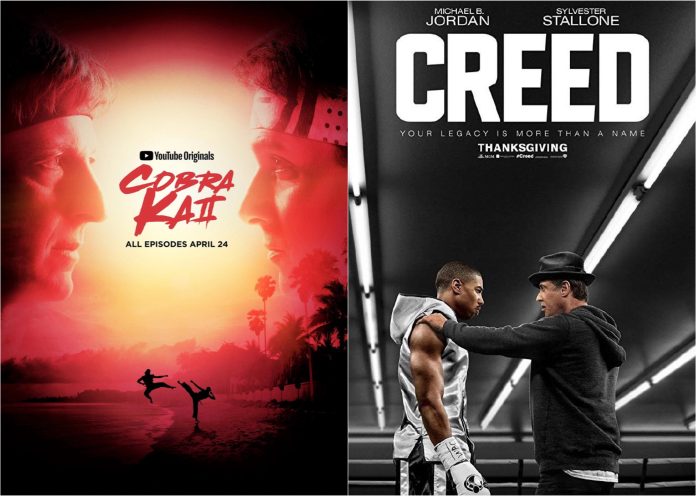 Ultimate examples of how to bring back iconic movie franchises successfully.

Within the last 3 years, 2 legendary film franchises have been brought back into the public consciousness, which stand out from others: Rocky (1976) and The Karate Kid (1984), which both received Academy Award nominations at the time. Through their respective new incarnations in Creed (2015) in cinemas and Cobra Kai (2018) on the streaming platform for YouTube in TV series form, they brought forth a new generation of young protagonists. Both received wonderful rave reviews from old fans that grew up on those films and new fans that were experiencing them for the first time, including media alike.

Variety-“It is an entertaining ride into a forgotten world of underdogs.

The Telegraph-“Stallone at his best”

Rogerebert.com- “Coogler’s direction leaves little doubt that “Creed” is writing a love letter to “Rocky” lore while also establishing an original narrative about its own creation”

Den of Geek- “Composer Ludwig Goransson forms a vital part of Creed’s full-frontal attack on our heart strings, and he brings a pounding, gladiatorial edge to Bill Conti’s old themes”

As I write this, the premiere episode of Cobra Kai Season 1 has received nearly 60 million views on YouTube, since it debuted in 2018. This show seems to have done for YouTube what House of Cards did for Netflix, and put it on the streaming platform map for original series. The creative geniuses that are behind bringing back this Universe are writer and producers Josh Heald, Jon Hurwitz, and Hayden Schlossberg (Hot Tub Time Machine and Harold & Kumar) respectively. They brought back two of the original stars of The Karate Kid, William Zabka and Ralph Macchio, on board. The show brought a new young protagonist in Xolo Maridueña, who starred as the teenage Latin American Miguel Diaz, the young man who is being mentored by William Zabka’s (Johnny Lawrence) in the Martial Arts of Cobra Kai. The trio of creators had the support of YouTube, Overbrook Entertainment (Will Smith’s production company), and Sony/ Columbia pictures to proceed.

The name of John G. Avildsen may be unfamiliar to new fans to both universes, but is extremely integral to the current legacies Creed and Cobra Kai. Along with their writers Sylvester Stallone (Rocky) and Robert Mark Kamen (The Karate Kid), he would go on to direct the original incarnations. He was the talented filmmaker who directed both Rocky (1976) and The Karate Kid (1984), the films which would go on to have legendary legacies in the world of boxing, martial arts and specifically the film movie industry.

Another bit of trivia: the 2 new young protagonists and stars of Cobra Kai and Creed (Michael B. Jordan and Xolo Maridueña) both starred on popular family drama Parenthood. And both their journeys in Cobra Kai and Creed are about 2 young men who have untapped talents with chips on their shoulders, trying to live up to their mentor’s legacies and build their own. No matter what people tell you, an individual can scratch, claw, and fight for themselves – literally in Miguel Diaz and Adonis Creed’s case – to forge their own destiny from perspectives we have never seen before, a Latinx American and African American’s point of view in modern society. We all have the power to change our destiny, just as both originals had Advilsen’s stamp of direction and the trademark the journey of the underdog.

On the Rocky side of things, a young and upcoming director by the name of Ryan Coogler had the idea to continue the Rocky Balboa legacy through the eyes of a young black boxer Adonis Creed, the son of Rocky’s former rival and best friend Apollo Creed, who died in the boxing ring in Rocky IV.

Ryan Coogler, along with his writing partner Aaron Corvington, pitched this idea and script to Sly Stallone himself, who felt the franchise was finished but was convinced by Coogler. Coogler had a personal connection to the Rocky films regarding his own father, and felt that there were enough fresh stories to launch the Rocky universe for a new generation. So with Stallone and MGM’s blessing, Creed was born. And after the success of Creed, this spawned a sequel which dealt with the fallout from the past Rocky films, keeping continuity.

It’s amazing how both franchises almost mirror each other, not just in the fact that the Advilsen directed both originals, which started decades ago, but how the script was flipped. The Rocky Balboa story would evolve into the point of view and family legacy of his rival and friend Apollo Creed, and Rocky teaching his son Adonis. The Karate Kid’s story would end up evolving from Daniel LaRusso and Mr. Myagi’s mentorship, which over 30 years later would happen with his arch nemesis, in a story of redemption from the perspective of the Cobra Kai philosophy featuring Johnny Lawrence mentoring Miguel Diaz with natural chemistry, of how to battle against bullies and life itself. William Zabka put in an Emmy nomination like career performance felt by many, showing sides of his acting ability that most of us didn’t realise he was capable of doing. This along with Ralph Macchio, who slipped into the shoes of an older Daniel LaRusso like he hadn’t been away. The return of classic 80’s soundtrack ‘Young Hearts’ by Commuter helped to add to the classic feel and throwback of the original, along with fresh young and new cast members, from both franchises such as  Mary Mouser and Tessa Thompson. So the lesson I believe to pull from this is a simple formula for the entertainment industry. When dealing with legendary film/ TV properties, simply respect the past, embrace the present, evolve for the future, and always respect the source material which is what spawned Creed from Rocky and Cobra Kai from The Karate Kid, to continue their legacies.

Cobra Kai season 2 will be available to stream on YouTube on April 24th 2019.

Creed and Creed II is available on DVD and Blu-ray and other digital platforms.