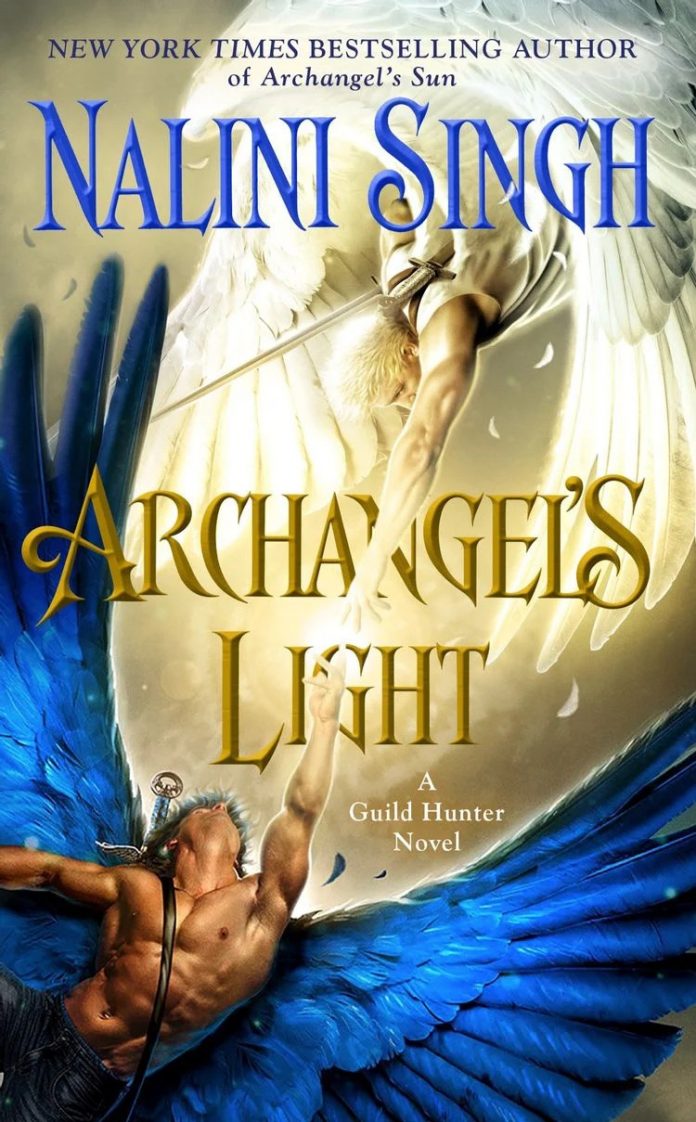 Illium and Aodhan. Aodhan and Illium. For centuries they’ve been inseparable: the best of friends, closer than brothers, companions of the heart. But that was before—before darkness befell Aodhan and shattered him, body, mind, and soul. Now, at long last, Aodhan is healing, but his new-found strength and independence may come at a devastating cost—his relationship with Illium.

As they serve side by side in China, a territory yet marked by the evil of its former archangel, the secret it holds nightmarish beyond imagining, things come to an explosive decision point. Illium and Aodhan must either walk away from the relationship that has defined them—or step forward into a future that promises a bond infinitely precious in the life of an immortal…but that demands a terrifying vulnerability from two badly bruised hearts

“He [Illium] was the one who’d altered the tenor of their embrace by turning his face into Aodhan’s neck in a way that wasn’t a thing of best friends.” ― Archangel’s Light

The main plot of Archangel’s Light was Aodhan’s becoming the second command of the new Archangel of China Suyin; Illium was sent in Asia to help the new court. While there is a bigger plot the essence and heart of the story are Illium and Aodhan’s love story.

Archangel’s Light is a character-driven book even more than the previous installments. Readers get abundant flashback chapters, giving us an insight into the two main characters’ history. As the youngest of The Seven, we get in-depth chronicles of Illium and Aodhan’s childhood. Be prepared for young Archangel Raphael as a surrogate father of Illium and supportive liege of Aodhan. *i’m a simp.*

Singh build up a wonderful development for the main characters; it was supported by anecdotes of their childhood friendship. Albeit, it was a slow burn BUT I’m not to complain. For this particular pairing and the plot it worked. There are tender kisses to compensate.

With that being said, I have so much love for Archangel’s Light; objectively speaking from plot to characterization it’s the best standalone novel from the Guild Hunter series by far. Singh balanced the plot intrigue and the romance. As I’ve said before, Archangel’s Light is a slow-burn romance filled with so much yearning and angst; it was impossible not to fall in love with this story.

Before I wrapped up this review, I want to address some readers’ concerns for Archangel’s Light. I noticed several readers of the Guild Hunter series are saying Aodhan and Illium came out of nowhere; that’s not true.

When I started reading Guild Hunter I noticed there’s something different with Aodhan and Illium’s friendship. While both of the angels have a great relationship with the other characters, there’s too much focus on their “history” and “friendship” that’s different from Dmitri and Raphael’s. As a romance reader, you get an inkling Illium and Aodhan are possible pairing from the get-go. Although, as a queer reader we’ve been baited too many times by different authors, it’s too difficult to trust. However, there’s a specific scene in Archangel’s Prophecy that personally convinced me Nalini was being deliberate; she’s been building the pairing and it shows from the twitter/tumblr fans who ship the two together. In this scene, Elena likened her relationship with Raphael to Aodhan and Illium’s:

“I’m scared all the time,” he [Illium] admitted, bracing his hands on the counter. “I know he’s [Aodhan] powerful, I’ve seen him in battle, and yet the fear crushes me.”

“Of course it does.” Elena let her wing overlap his. “That’s what it means to love someone.” She gave him a lopsided smile. I worry about Raphael and he’s an archangel. I’ve been known to warn him that if he gets hurt, I’d kill him dead.”

Elena could’ve said she worries for her guild-hunter friends who are often despatched to dangerous missions, but instead she chose to compare her relationship with Raphael with Aodhan and Illium’s. After all, there is a lot of emphasis on the friendship part but even, Elena knows that Illium and Aodhan’s bond surpasses friendship. Throughout the series, Raphael and Elena have been very perceptive of Illium and Aodhan’s connection as seen below:

The two angels were both tall, but Aodhan was perhaps an inch taller, and now his eyes locked with Illium’s for a long, quiet moment before he lowered his head very slightly. Illium raised his hand, the movement slow, hesitant . . . and then his fingers brushed Aodhan’s cheek just below the cut that had almost sealed. The first ray of dawn kissed the tear that rolled down Illium’s face, caressed the painful wonder on Aodhan’s as he lifted his hand to clasp the wrist of his friend’s hand.

That instant of contact, the power of it, stole her breath.

Then Illium smiled, said something that made Aodhan’s lips curve—Elena thought it might’ve been “Welcome back, Sparkle”—and they were separating to sweep off the Tower in a symphony of wild silver blue and heartbreaking light.

“Raphael,” she whispered, having felt him come up behind her. “Did you see?”

“Yes.” His hand on her nape, his thumb brushing over her pulse. “Of course it would be Illium who reached him,” he murmured.

Illium was the first immortal or mortal that touched Aodhan after hundred of years, how can we not ship them? Please, explain your reasoning.

I added some of my favorite Aodhan x Illium’s interaction from the previous books, feast your eyes and clench your fists.

“The twenty-three months Aodhan had been missing had been the most horrific period of Illium’s life… worse than when he’d lost his mortal lover. He’d survived losing her. He didn’t know if he could survive losing Aodhan. Never before had he seen that truth so clearly and it shook him.“

Aodhan broke eye contact with Raphael to meet Illium’s gaze. The words he spoke were edgier than she’d ever heard Aodhan sound. “I’m no longer a broken doll who needs to be protected from those who might play roughly with me.”

Flinching as if he’d been slapped, Illium shoved back his chair and left the library through the doors that stood open to the lawn.

Illium’s jaw worked. “So I’m not allowed to worry about my friend?” His wing sliding away as he turned to face her [Elena], he shook his head again. “Do you know what it did to me when we lost him? The nearly two years he was gone?”

“I think Illium has forgotten who I was before I was broken.”

Pulling at the final door with one hand, Elena found she couldn’t budge it. She waved toward Aodhan. “So remind him,” she said as he hauled it open. “But don’t forget that all the time you turned recluse, he was also growing and living his life. He’s not the same person, either.”

“He [Aodhan] rarely gives in to it. Illium was always the more volatile of the two, but Aodhan had his moments.”

Elena worked through the idea of a hot-tempered Aodhan, began to smile.

“Well, he might be pissed, but you know what?”

“It means Sparkle really is coming back.” Artistic temper and all.

“Yes,” Raphael said with a slow smile, “you are right. Our Sparkle is indeed coming back to us.” He raised his head to look up at the stars. “I wonder how long it will take your Bluebell to understand that?”

Illium continued to spend more time at Erotique than he probably should, especially with Aodhan gone. Elena didn’t think that environment—sophisticated and full of vampires jaded and often no longer capable of simple happiness—was the greatest for him, but she couldn’t exactly ground him. She’d done plenty of self-destructive things herself before she met Raphael.

“Aodhan walked over to his best friend without a word, hauled him into an embrace, one of his hands cradling the back of Illium’s head, his other arm locked around Illium’s shoulders. As if he had never shunned touch, never turned away from even the angel he most trusted.

Illium remained stiff, his wings folded tight to his back, but Aodhan was having none of it. He wrapped Illium up in his own wings and Elena was close enough to hear him say, “I am here for you,” in a tone as unbending as stone.

“My beautiful boy,” she said on the wave of memory, “you’ve never loved with boundaries. Don’t begin now. Don’t alter who you are because you’re afraid that you’ll lose what you love.”