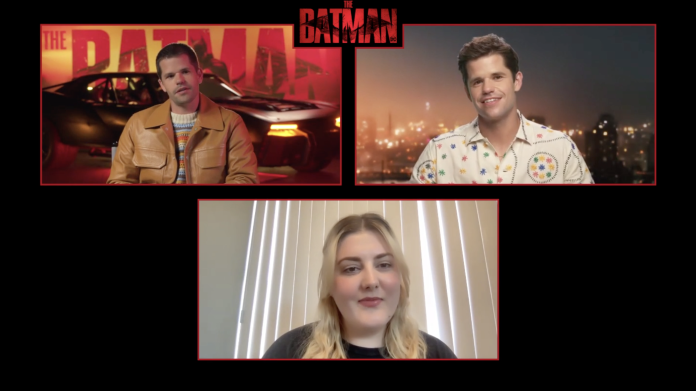 HNS had the chance to catch up with a few of our favorites from Gotham City – and Beacon Hills – ahead of The Batman‘s upcoming release on home entertainment. We spoke exclusively with Charlie Carver and Max Carver, who play the The Twins – men of many muscles and few words who act as bouncers for The Iceberg Lounge, the preferred lair of Colin Farrell’s Penguin, in the new movie starring Robert Pattinson as Bruce Wayne / Batman.

The Carvers shared what it was like to fight Battinson, which other iconic Batman characters they would like to see in the recently announced sequel film, and whether we might see them return to Gotham – or reprise their roles in the upcoming Teen Wolf movie. (We know Max’s character Aiden is – spoiler alert – long dead in that town, but historically that hasn’t ruled out a return in Beacon Hills.)

Watch the exclusive interview below:

More than a year of stalking the streets as the Batman (Robert Pattinson), striking fear into the hearts of criminals, has led Bruce Wayne deep into the shadows of Gotham City. With only a few trusted allies – Alfred (Andy Serkis), Lt. James Gordon (Jeffrey Wright) – amongst the city’s corrupt network of officials and high-profile figures, the lone vigilante has established himself as the sole embodiment of vengeance amongst his fellow citizens.

When a killer targets Gotham’s elite with a series of sadistic machinations, a trail of cryptic clues sends the World’s Greatest Detective on an investigation into the underworld, where he encounters such characters as Selina Kyle (Zoë Kravitz), Oz, a.k.a. The Penguin (Colin Farrell), Carmine Falcone (John Turturro), and Edward Nashton / The Riddler (Paul Dano).

As the evidence begins to lead closer to home and the scale of the perpetrator’s plans becomes clear, Batman must forge new relationships, unmask the culprit, and bring justice to the abuse of power and corruption that has long plagued Gotham City.

The Batman is now streaming on HBO Max. Premium Digital Ownership debuts early today, April 18. Bring home the movie on 4K, Blu-ray, and DVD on May 24.