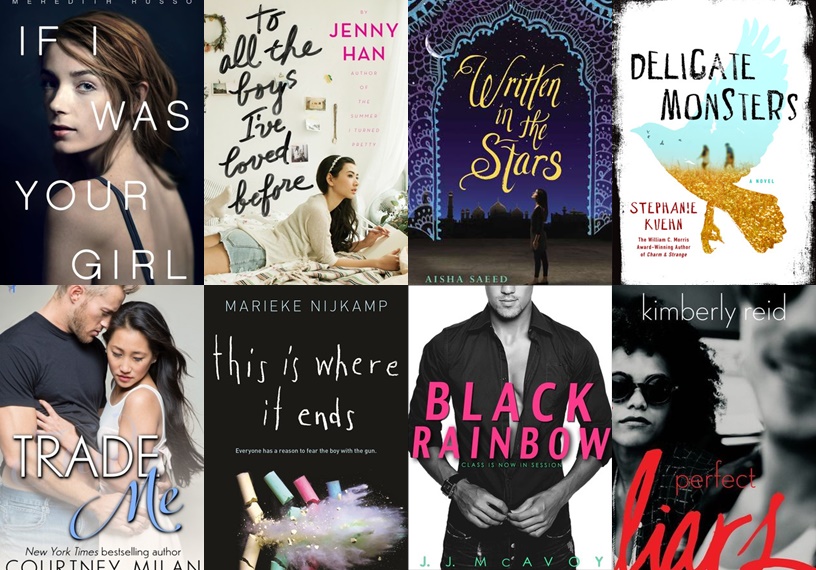 In honor of Fourth of July, I gathered eight of Hollywood News Source’s favorite underrated American protagonists from Young Adult to New Adult. There is nothing more patriotic than supporting your fellow citizens.

In mainstream media, marginalized groups such as racial minority, LGBTQ+, immigrants are often neglected and undermine, but books about them do exist. You just have to know where to look! These stories are more than a living proof of political stance, they are people who have so many stories to tell. You can see our recommendation below: Andrea Faraday is junior class valedictorian at the exclusive Woodruff School, where she was voted Most Likely to Do Everything Right. But looks can be deceiving. When her parents disappear, her life and her Perfect Girl charade begins to crumble, and her scheme to put things right just takes the situation from bad to so much worse. Pretty soon she’s struck up the world s least likely friendship with the juvenile delinquents at Justice Academy, the last exit on the road to jail and the first stop on the way out.

If she were telling it straight, friendship might not be the right word to describe their alliance, since Drea and her new associates could not be more different. She s rich and privileged; they re broke and, well, criminal. But Drea s got a secret: she has more in common with the juvie kids than they d ever suspect. When it turns out they share a common enemy, Drea suggests they join forces to set things right. Sometimes, to save the day, a good girl s gotta be bad.” To All the Boys I’ve Loved Before by Jenny Han

To All the Boys I’ve Loved Before is the story of Lara Jean, who has never openly admitted her crushes, but instead wrote each boy a letter about how she felt, sealed it, and hid it in a box under her bed. But one day Lara Jean discovers that somehow her secret box of letters has been mailed, causing all her crushes from her past to confront her about the letters: her first kiss, the boy from summer camp, even her sister’s ex-boyfriend, Josh. As she learns to deal with her past loves face to face, Lara Jean discovers that something good may come out of these letters after all. This Is Where It Ends by Marieke Nijkamp

10:00 a.m. The principal of Opportunity High School finishes her speech, welcoming the entire student body to a new semester and encouraging them to excel and achieve.

10:02 a.m. The students get up to leave the auditorium for their next class.

Told from four different perspectives over the span of fifty-four harrowing minutes, terror reigns as one student’s calculated revenge turns into the ultimate game of survival. This heart-wrenching novel explores what it is like to be thrust into an unwanted marriage. Has Naila’s fate been written in the stars? Or can she still make her own destiny?

Naila’s conservative immigrant parents have always said the same thing: She may choose what to study, how to wear her hair, and what to be when she grows up—but they will choose her husband. Following their cultural tradition, they will plan an arranged marriage for her. And until then, dating—even friendship with a boy—is forbidden. When Naila breaks their rule by falling in love with Saif, her parents are livid. Convinced she has forgotten who she truly is, they travel to Pakistan to visit relatives and explore their roots. But Naila’s vacation turns into a nightmare when she learns that plans have changed—her parents have found her a husband and they want her to marry him, now! Despite her greatest efforts, Naila is aghast to find herself cut off from everything and everyone she once knew. Her only hope of escape is Saif . . . if he can find her before it’s too late. When nearly killing a classmate gets seventeen-year-old Sadie Su kicked out of her third boarding school in four years, she returns to her family’s California vineyard estate. Here, she’s meant to stay out of trouble. Here, she’s meant to do a lot of things. But it’s hard. She’s bored. And when Sadie’s bored, the only thing she likes is trouble.

Emerson Tate’s a poor boy living in a rich town, with his widowed mother and strange, haunted little brother. All he wants his senior year is to play basketball and make something happen with the girl of his dreams. That’s why Emerson’s not happy Sadie’s back. An old childhood friend, she knows his worst secrets. The things he longs to forget. The things she won’t ever let him.

Haunted is a good word for fifteen-year-old Miles Tate. Miles can see the future, after all. And he knows his vision of tragic violence at his school will come true, because his visions always do. That’s what he tells the new girl in town. The one who listens to him. The one who recognizes the darkness in his past.

But can Miles stop the violence? Or has the future already been written? Maybe tragedy is his destiny. Maybe it’s all of theirs. Amanda Hardy is the new girl in school in Lambertville, Tennessee. Like any other girl, all she wants is to make friends and fit in. But Amanda is keeping a secret. There’s a reason why she transferred schools for her senior year, and why she’s determined not to get too close to anyone.

And then she meets Grant Everett. Grant is unlike anyone she’s ever met—open, honest, kind—and Amanda can’t help but start to let him into her life. As they spend more time together, she finds herself yearning to share with Grant everything about herself…including her past. But she’s terrified that once she tells Grant the truth, he won’t be able to see past it.

Because the secret that Amanda’s been keeping? It’s that she used to be Andrew. Trade Me by Courtney Milan

Tina Chen just wants a degree and a job, so her parents never have to worry about making rent again. She has no time for Blake Reynolds, the sexy billionaire who stands to inherit Cyclone Technology. But when he makes an off-hand comment about what it means to be poor, she loses her cool and tells him he couldn’t last a month living her life.

To her shock, Blake offers her a trade: She’ll get his income, his house, his car. In exchange, he’ll work her hours and send money home to her family. No expectations; no future obligations.

But before long, they’re trading not just lives, but secrets, kisses, and heated nights together. No expectations might break Tina’s heart…but Blake’s secrets could ruin her life. With everyone in class vying to be one of the twelve disciples—a group of twelve students that Professor Black takes under his wing—tensions run high. Thea considers dropping his class, given their passionate week together and their undeniable chemistry. After all, there are other (less infuriatingly sexy) law professors on campus.

But to accomplish her goal and get her father out of prison, Thea knows she needs to learn under the best of the best—and that’s Levi Black.