Author James SA Corey the author of The Expanse was at MCM Comic Con London and took to the Live Stage to answer questions.

In a twist that seems perfectly in keeping with the hit Sci-Fi novel series turned Amazon Prime show James SA Corey is, in fact, two people Daniel Abraham and Ty Franck. The two talked about the collaboration process behind the series took a number of questions from the Live Stage audience. 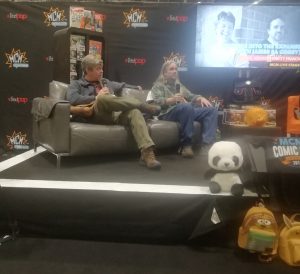 A police detective in the asteroid belt, the first officer of an interplanetary ice freighter and an earth-bound United Nations executive slowly discover a vast conspiracy that threatens the Earth’s rebellious colony on the asteroid belt.

After three seasons at the Syfy channel the show was cancelled despite huge fan acclaim. Those fans did not lose hope and then the show was rescued by Jeff Bezos who made the surprise announcement of the show moving to Amazon Prime at the National Space Society’s International Space Development Conference in Los Angeles on May 26, 2018.

The writing team had some interesting announcements to make which I won’t spoil before you watch. We also learned a lot about how The Expanse was written and how the team met before deciding to collaborate.

Check out the Live Stage interview below.