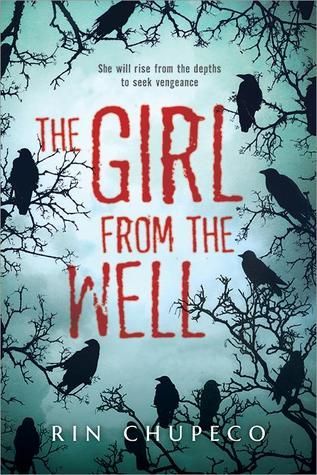 You may think me biased, being murdered myself. But my state of being has nothing to do with the curiosity toward my own species, if we can be called such. We do not go gentle, as your poet encourages, into that good night.

A dead girl walks the streets.

She hunts murderers. Child killers, much like the man who threw her body down a well three hundred years ago.

And when a strange boy bearing stranger tattoos moves into the neighborhood so, she discovers, does something else. And soon both will be drawn into the world of eerie doll rituals and dark Shinto exorcisms that will take them from American suburbia to the remote valleys and shrines of Aomori, Japan.

Because the boy has a terrifying secret – one that would just kill to get out.

The Girl from the Well is A YA Horror novel pitched as “Dexter” meets “The Grudge”, based on a well-loved Japanese ghost story.

We are the fates that people fear to become. We are what happens to good persons and to bad persons and to everyone in between. Murdered deads live in storms without season, in time without flux. We do not go because people do not let us go.

I frankly hadn’t heard of this book before, or I genuinely just don’t remember it, until I read an article about it the other month. Read it here.

I usually shy away from anything horror related…mainly because I’m a complete wuss. However I have seen a handful of popular Japanese and Filipino thriller films before. Rest assured, I watched them through my fingers or with a pillow barricading half my face. You don’t make a girl with a wild imagination watch gory movies. You just don’t. It usually does not end well for the spirits and I.

Inspired by the well-known Japanese ghost story “Bancho Sarayashiki”, The Girl from the Well follows the story of Okiku who is a dead girl who died in the well three hundred years ago who is a vengeful ghost who haunts predatory men.

Then she sees the boy with peculiar tattoos, Tarquin. Okiku cannot help but find herself unexpectedly drawn to him and his world and to the darkness that follows him around. She forms an attachment and protectiveness to him. Soon after, Tark has to confront the shadow that follows him. They have to go to Japan. There, Okiku would be forced to revisit her own demons.

The Girl from the Well is not what I expected it to be and that is obviously not a bad thing. I was highly anticipating I would pee my pants, but instead I scored a flowery and lyrical narration. While horror might not be my cup of tea, these things totally are. It is lovely and delicious. Describing this book as such totally say so much about my character.

Okiku, the narrator of the book has a penchant for counting things. I am ferociously captivated by that.  I love seeing characters with little quirks and habits seamlessly woven into the plot. Aside from that, she is an engaging story teller.

“Men, right? Bastards, no matter the time or place.”

She is vindictive and has a thirst to make offenders pay for their inhuman transgression.

I release her soul outside the Stained Shirt Man’s apartment. By then she is nothing more than a glowing ball of fire cradled against my withered form. I close my eyes, trying to absorb every bit of warmth I can take from her—to bring out and remember during other colder nights—before lifting my hands to the sky. Unbidden, she rises up, floating briefly above me as if granting benediction, before she continues to soar higher and higher like an autumn balloon, until she becomes another speck of cloud, another trick of the light.

But she also has a heart. She loves freeing all those children who are bound to their killers so they can move on to their next life.

Meet Tarquin, the half Japanese main character of the story. All his life, he’s been haunted by things he can’t control, his strange tattoos he always tries to cover up. The scandals that surrounds him from his previous schools. The history of his mother, the fact that she attempted to strangled him countless of times. The old lady who follows him around.

I’ve always struggled connecting with male characters. I suppose in most cases it’s how they are written. But unlike his YA counterparts I couldn’t connect with, Tarquin resonates with me. He deals with his problem. He is open-minded to things unknown. He can also be funny and adorable.

Just the other day, I found a salon that specializes in giving girls crooked teeth. And this is considered adorable, if, uh, Japanese girls who look like vampires needing braces are supposed to turn men on. Also, there’s a holistic care spa specializing in dogs. I think in my next life I’d like to come back as some rich Japanese lady’s labradoodle and enjoy all these spoils. Kinda ironic that most hot spring resorts allow for dogs, but not for people with tattoos. So I guess in this current Japanese social hierarchy, we’ve got Japanese > pets > me.

Plot wise, it’s apparent Chupeco did fine research. The Japanese culture is much embedded in the story. There is explanation for those unfamiliar with certain phrases. It is well written. I love how she writes her words. While I can’t vouch for the Japanese representation I can guarantee The Girl from the Well is a remarkable debut.

Kerly Sue is a self-proclaimed book reviewer and contributing writer at Hollywood News Source, formerly known as Young Adult Hollywood. In addition to being a full time book junkie, Sue also runs the first fansite for Vampire Academy’s Lucy Fry. When she’s not tucked between the pages of her books, you can find her screaming like a banshee on her personal blog. You can also follow Kerly Sue on her bookstagram account.