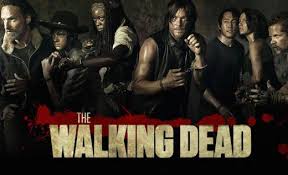 It’s finally come down to the last episode of the season and with it being 90 minutes long (or so they said, though I wasn’t convinced as it started at 9pm here and finished 10:15pm…that’s not 90 minutes.), we were sure to have a lot to deal with. Anyway, the episode starts off calm, though my nerves are still wrought. Morgan is still out looking for Carol. He’s lucky enough to find a stranded horse, and rides it through several small towns. I’m amazed he even knows how to ride one. Then we cut to the man that walked off injured in last episode. The one Carol didn’t even bother to check if he was dead. I mean, surely you’d have done a body count? Quick shot to another man, running through a forest, and then the whistling starts. That whistling drove me nuts, and it’s so creepy. It’s obviously a soundtrack but even still. He is surrounded by the Saviours. That gang never seems to dwindle in size, despite the massacre that occurred a few episodes ago.

Rick and Company are busy preparing to take Maggie to the doctor at the Hilltop, because of what happened at the end of last episode. We still don’t know properly what is wrong, but I suspect she lost the baby and it’s done damage to other parts of her body. Eugene stands up for himself, asking Rick to let him tag along. I love that he’s finally manned up and realised he is good for something other than science. Even good ole Gabriel is helping to protect Alexandria while they’re gone. Rick tells Spencer that if the Saviours go to them, he wants them to wait for him. That he has a deal.

Morgan finally finds Carol! YAY! I mean, that didn’t exactly take long. Carol could have found a better hiding place than the doorstop of a library. She’s badly injured, and looking rough around the edges. Despite her telling Morgan that he shouldn’t have come looking and that she doesn’t want his help, she doesn’t protest much until he’s bandaged her up and then threatens to shoot him if he doesn’t leave. I can’t help but think these two will develop some kind of bond in next season. It’s obvious Morgan likes her, though maybe not like that. Carol hates him. Carol tells him that if you care about people, there are people to protect, then there are people you’d kill for. If you can’t, then you shouldn’t be around them. “I can’t anymore,” she explains. It’s heartbreaking and I felt so bad for her. She’s come to the end of her tether. Morgan leaves her for a bit but when he returns he discovers she’s gone. We don’t know where until we see her running, is attacked by a walker and then shot by the man she left ALIVE. Twice. It’s horrifying. I don’t know how she survived, but then Morgan finds her. He tries to help. Two strange men appear, one on a horse and they offer to help her. I wonder what the catch is with that. We don’t see anymore of Carol this episode.

Meanwhile, as Rick and Co set off in their RV, they come to a halt when they’re blocked by none other than the Saviours. They’ve pulled the man – I have no idea who he was – into the road and prepare to ‘teach them a lesson’ or something. Considering each group have guns, no one shoots. Quite frankly I think Rick and the others could have taken these idiots.

They retreat, but are quickly stopped at every route they try. Maggie isn’t fairing well at all. It’s quite sad how Rick tells her that as long as they’re together, they can do anything. It’s hopeful and brave, yes. But also very naive and stupid because he can’t possibly believe he can win against everything. There’s a creepy moment when they’re stopped again by a row of walkers all chained together. They’re ready to cut them down when they realise one walker has one of Michonne’s braids in their hair, and one of Daryl’s arrows stuck in another. It becomes apparent they know something’s not right. I love how Rick manages to kill three walkers in a row, with only one or two bullets. The Saviours attack them by only shooting at their feet, still it’s amazing no one dies. Eventually they’re reduced to carrying Maggie and Eugene bravely takes the RV another way. He explains that the Saviours are expecting the RV and they don’t know the occupancy of it. Eugene and Abraham hug, and I’m almost in tears. I feel like something bad is going to happen and then my predictions come true. Rick and the ones carrying Maggie are surrounded by whistling. It’s crazy. And scary. Then lights everywhere and the RV. Eugene on the ground, bloody.

All throughout this episode we see a door with holes in, and odd muffled talking. I didn’t know what to think at first, but it’s then made clear near the end when a door is opened and out come Daryl, Rosita, Michonne and Glenn. Daryl looks so bad, but he’s alive. That’s what matters. Phew!

But then here comes the moment we’ve all been waiting for. When the group are reduced to their knees – even Maggie who can barely stand – the second in command (or so I’m guessing) says “let’s meet the man” and the RV doors open to reveal NEGAN! You would not believe the hyena fangirl scream that escaped me. I know, he’s an evil bastard, but he’s JEFFREY DEAN MORGAN! I have loved him since Supernatural. He portrays Negan SO well and inhabits his charm and charisma and evilness like he owns it. Which he does, really. He tells the line up that he wants their stuff and they all belong to him now. I’m on the edge of my seat, totally gripped by him. His bat swings around like a pendulum waiting to strike. The only way he decides who he’s going to punish is by Eeny Meeny Mini Mo.

Will we find out who he struck? Yes. But not until Season 7 which begins, I believe, in October. At first I thought it might have been Carl he hit, purely going by what he said about ‘if anybody moves, take the boys other eye out’ but then I realised that he’d already have killed him if it were him so no. Predictions are Abraham or Glenn, but out of those two, I’d rather lose Abraham, though I did like him.

So that’s it for this season. I’ve enjoyed writing these reviews, even if they can be lengthy. It’s fun to get my perspective out there.