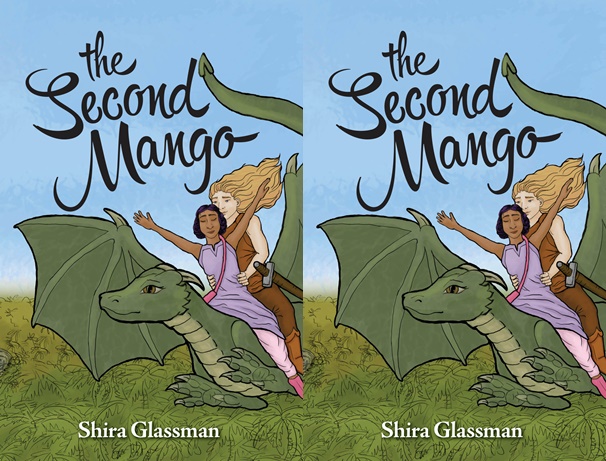 I’ve been wanting to read Shira Glassman’s Mangoverse for a while. It’s a fantasy series following a majority queer-women cast. That definitely sounds like my thing. Besides from her fantasy books, Glassman has also penned several standalone books. Her most recent release is Knit One, Girl Two. It’s an #ownvoices Jewish f/f contemporary romance.

For pride month, we invited several LGBTQ+ authors in at Hollywood News Source. Today, we have Shira Glassman to talk about her books, favorite moments, representation, and upcoming releases.

You have a novella that recently came out, Knit One, Girl Two, can you tell us what is it about?

Knit One, Girl Two is a fluffy romance between two Jewish women who bond over their contrasting creative sides. Clara, the main character, dyes yarn to sell as a hobby and gets inspired by Danielle’s paintings of Florida wildlife to create a yarn line themed on her work. The story’s only 68 pages long, but it touches on fandom, family, the ups and downs of trying to sell things online, and the vaporous nature of inspiration itself. Oh, yes, and girls kissing in a science museum!

Aside from several short stories, you have also penned Mangoverse which is a fantasy series. I plan on binging it this year! For those who are unaware, how would you recommend it to our readers?

The Mangoverse is a fluffy, fairy-tale series focusing on all types of relationships between the characters, mostly queer women. There’s romance — a queen with a female partner, and some details about what it was like growing up as a lonely gay princess — there’s friendship, there’s people adopting loved ones into their lives as surrogate family, there’s a young queen’s relationship with her people and wanting to do right by them as entrusted to her by her father. The setting is inspired by my childhood home of South Florida (which y’all can visit “for real” in the knitting book!) and I also found meaning in celebrating the fulfilling parts of Jewishness and Jewish culture.

In other words, this is the kind of series where a royal family with two moms and two dads celebrates Purim and a dragon soothes the little crown princess’s tears when she’s fussing later that night.

Let’s play a game which is ranking your own books. Among all your works which one has made you swoon the most, laugh the most, cry the most, and has surprised you the most?

Rivka and Isaac make me swoon, whether it’s their Tragic Romantic Backstory in The Second Mango (ch. 7-10) or their present-day shenanigans and literally flipping each other over in flirty playfights in The Olive Conspiracy. A warrior woman and a sneaky older wizard with a goatee — I accidentally created my ideal fictional hetero couple and I’ve loved every minute of writing about them.

Laugh? I had so much fun writing chapter 12, “The Rat Who Wore A Dragon’s Skin”, in A Harvest of Ripe Figs. Clever little Queen Shulamit outsmarts a character who’s stolen shapeshifting magic in order to impersonate Isaac and steal her jewels. I’ve adored the “tiny but resourceful heroic trickster” trope since I was little, especially with women, so I loved shaping her trap and watching her spring it.

As far as surprise, let’s go with the very first one–because to be honest I never expected to suddenly start finishing entire novels as an adult. That was the biggest surprise of all.

Lastly, what are the current books that you love that you would recommend in a heartbeat?

My favorite f/f fantasy series is the Alpennia books by Heather Rose Jones, starting with Daughter of Mystery. It’s set in the early 19th century and centers on the life of middle and upper class lesbians and bi women, some of whom are learning to practice various forms of religious and secular magic. By the third book, Mother of Souls, they’ve founded a women’s college, written an opera, and saved the country (an imaginary principality between Italy, France, and Switzerland) from political intrigue at least once per book.

I also loved Peter Darling by Austin Chant, trans lit by a trans author, in which a trans Peter Pan grows up (which isn’t as weird as a grown Peter Pan sounds) to confront toxic masculinity and fall in love with Captain Hook.

These books are everything I wanted to read as a teenager so I’m super glad they exist now.

As a reader and writer, what would you’d like to see more in the LGBTQIAP genre? We are taking strides, but there’s still a lot of gaps to fill.

Well, I know that trans readers and the cis people who love them would really like to see more meaningful trans representation in stories that aren’t about The Trans Experience (especially by trans authors.) Additional marginalizations in combination with whatever your LGBTQAetc. labels are, such as characters who are queer and Jewish (and in some cases disabled) like mine, for example, are another area that needs growth. These books do exist; they just have trouble getting the attention they deserve because the more marginalized a book’s creator is, the less likely they’ll have the social power to advertise.

On a more personal level, I like it when the romantic interest is a bigger guy and/or an older guy; I hardly read any m/m at all but much of what I’ve enjoyed comes out of Bear Bones Books, the “Bear” imprint of Lethe Press (such as The Bears of Winter anthology.) I’m also very interested in SFF (and historical, as long as it’s not too weighed-down by period-appropriate oppression) stories centering on queer ensemble casts and found-family rather than just “a couple.”

What can we expect next from Shira Glassman?

My short story “Gifts of Spring” was recently accepted into the Queerly Loving anthology coming soon from Queer Pack, an imprint of Ylva. It’s a Baroque fantasy romance between a young trans woman mage and an older man, a Jewish street performer she rescues from an angry mob. Honestly, I wish there was more Baroque fantasy in general. Those huge skirts totally lend themselves to SFF magic! Small-batch independent yarn dyer Clara Ziegler is eager to brainstorm new color combinations–if only she could come up with ideas she likes as much as last time! When she sees Danielle Solomon’s paintings of Florida wildlife by chance at a neighborhood gallery, she finds her source of inspiration. Outspoken, passionate, and complicated, Danielle herself soon proves even more captivating than her artwork… The Second Mango by Shira Glassman

Queen Shulamit never expected to inherit the throne of the tropical land of Perach so young. At twenty, grief-stricken and fatherless, she’s also coping with being the only lesbian she knows after her sweetheart ran off for an unknown reason. Not to mention, she’s the victim of severe digestive problems that everybody thinks she’s faking. When she meets Rivka, an athletic and assertive warrior from the north who wears a mask and pretends to be a man, she finds the source of strength she needs so desperately. Unfortunately for her, Rivka is straight, but that’s okay — Shulamit needs a surrogate big sister just as much as she needs a girlfriend. Especially if the warrior’s willing to take her around the kingdom on the back of her dragon in search of other women who might be open to same-sex romance. The real world outside the palace is full of adventure, however, and the search for a royal girlfriend quickly turns into a rescue mission when they discover a temple full of women turned to stone by an evil.

She lives in north central Florida, where the alligators are mostly harmless because they’re too lazy to be bothered.