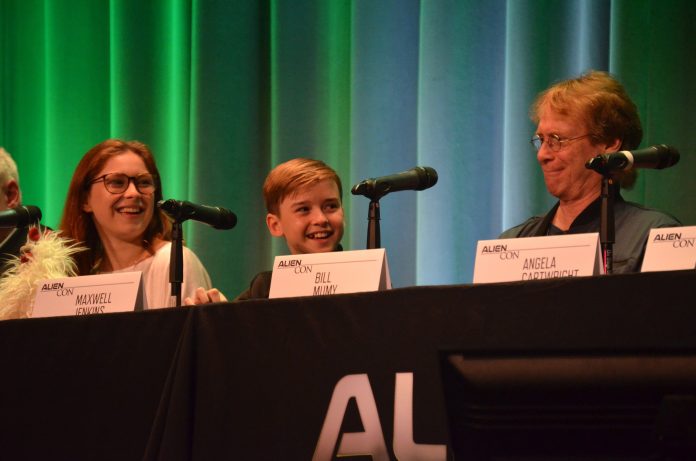 This past weekend, Pasadena was home to AlienCon drawing thousands to the convention center to celebrate aliens, sci fi shows and the supernatural. AlienCon brings together all those seeking the truth about extraterrestrial existence throughout history, featuring thought-provoking original programming, celebrity appearances, exhibits, exclusive merchandise, fan competitions, and much more! 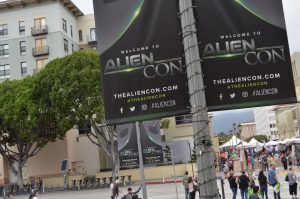 The biggest surprise I saw this weekend was the extensive amount of alien and sci fi inspired artwork. There were booths with incredible artwork for sale, a booth with hand crafted metal figurines inspired by our film and TV favorites, and artists drawing jaw droppingly beautiful pictures out of chalk on the sidewalk leading into the convention center.

The heart of the convention was definitely the incredible panels. Panels included everything from alien abductions to government cover up theories to panels with cast members from the X-files to a sneak peek of upcoming History show titled “In Search Of” and so much more.

History’s “In Search Of”

We attended the sneak peek for History’s In Search Of and were left feeling so excited for this show. It was a brief sneak peek but just the right amount to leave us wanting more. The show is hosted by Zachary Quinto – obviously a great call – and I really like how unbiased he tries to remain with the topics he covers in the show. I don’t want to spoil too much, but I will say the sneak peek we saw included a young man who believes he has been abducted by aliens periodically since he was a child. He recounts the events and everything he remembers from them and requests a lie detector test in an effort to prove he’s telling the truth about what he saw. Quinto remains as neutral as possible but also conveys he can tell the young man truly believes in what he’s saying.

Here are some tidbits we learned at the panel:

Part of the draw for the huge crowds here are the opportunities for fans to meet their idols, their sci fi heroes. Unfortunately, we weren’t allowed access to take pictures of the autograph or photograph sessions with fans, but from what we saw, fans seemed very very delighted to meet the talent that were there. I would highly recommend participating in these add on experiences at your next convention!

Jealous that you had to miss out on all the festivities, East Coast? Don’t fret! AlienCon is coming to Baltimore on November 9-11, 2018. You can purchase tickets HERE!