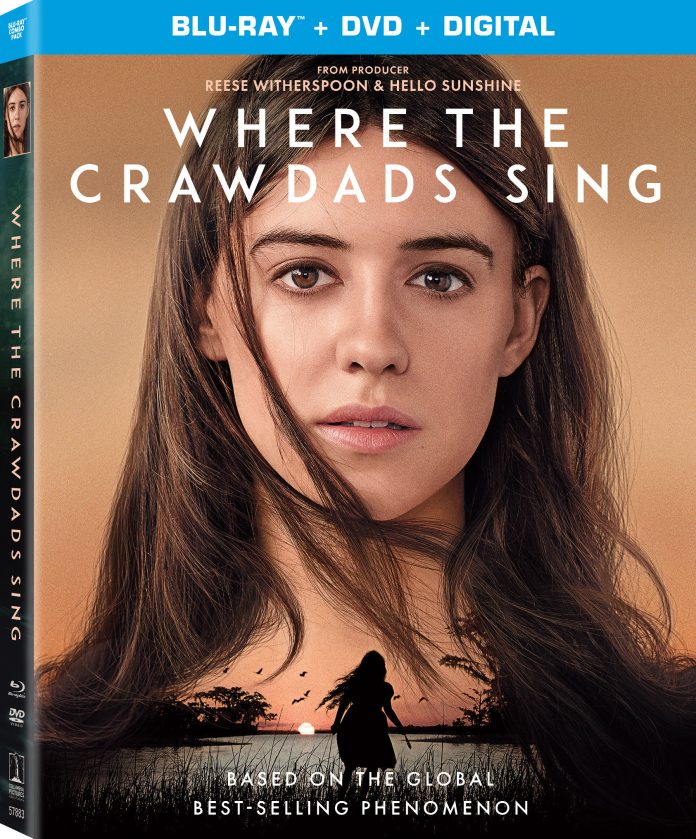 We received a copy of the “Where the Crawdads Sing” on Blu-ray/DVD/digital to review. This product releases on September 13th. Read our review below to see why you should grab your copy today!

From the best-selling novel comes a captivating mystery. Where the Crawdads Sing tells the story of Kya, an abandoned girl who raised herself to adulthood in the dangerous marshlands of North Carolina. For years, rumors of the “Marsh Girl” haunted Barkley Cove, isolating the sharp and resilient Kya from her community. Drawn to two young men from town, Kya opens herself to a new and startling world; but when one of them is found dead, she is immediately cast by the community as the main suspect. As the case unfolds, the verdict as to what actually happened becomes increasingly unclear, threatening to reveal the many secrets that lie within the marsh.

• Adapting a Phenomenon: Explore the journey of bringing the best-selling novel to life as told by the cast and filmmakers of Where The Crawdads Sing.

• Creating the World: When a book is as beloved as Where The Crawdads Sing, the details of the world are everything.  Hear firsthand from the designers and artists that translated those images to the screen.

• Women in Focus: From its captivating central character, Kya, crafted by author Delia Owens to the incredible team of women at the helm of the film adaptation, this piece is a testament to the strength, determination and resilience of women both onscreen and behind the scenes.

• 14 Deleted & Extended Scenes: See more of the marsh, mystery and magic in this collection of deleted and extended scenes.

Rating: This film is rated PG-13 by the Motion Picture Association for the following reasons: sexual content and some violence including a sexual assault.

This product is a 3-in-1 blu-ray, DVD, and digital copy of “Where the Crawdads Sing.” As someone who enjoys collecting physical media of things while also loving the convenience that digital copies bring, I have to say I appreciate this so much. The product also comes with a protective outer sleeve, making it look nice and sleek. But the best part about any blu-ray, DVD, or digital copy you buy is always going to be the thing you can get nowhere else – the special features! So let’s dive into all the special feature goodness this product has to offer.

The first extra is titled “Adapting a Phenomenon” and it offers a lot of great footage. It features interviews with author of the “Where the Crawdads Sing” novel Delia Owens, several producers including Reese Witherspoon, several actors, and screenwriter Lucy Alibar. These interview snippets are intertwined with beautiful shots from the film as well as some overlaying pages from the script, which is edited in a really cool way. The next feature is “Creating the World” and it feels like a continuation of the first special feature. It is structured similarly to the first special feature but focuses on the magical sets they designed to fit within Kya’s world. It was very interesting to see the different sets and to see all of the little details. What I love about special features like this one is that it gives you a newfound appreciation for filmmaking. There’s so much thought and detail that goes into every aspect of the sets, and when you’re watching the film a lot is missed, because as a viewer you’re often focused so heavily on the characters you don’t notice these details. I especially loved seeing how they designed Kya’s cabin.

The next feature is called “Women in Focus” and it highlights the power of women that resonates throughout the film. From our main character of Kya, to director Olivia Newman, to screenwriter Lucy Alibar, to producers Reese Witherspoon and Lauren Neustadter, and beyond. In addition to those, the Art Director, Costume Director, and author of the novel are all women, which we see in this special feature. It’s no secret that female filmmakers are massively underrepresented in Hollywood, and this film has really challenged that norm by surrounding itself with women. I love how this is highlighted in its own special feature.

Next up is the Deleted & Extended Scenes – though it’s only labeled as “Deleted Scenes” on the menu. I always love getting deleted and extended scenes when I buy blu-ray/DVD/digital copies of films, but rarely do you get as many as this product offers. This feature is jam-packed with a whopping 14 deleted and extended scenes! This feature is pretty self explanatory in terms of what you can expect from the title. There’s so much more we get to see here that we didn’t see in the film. And what’s great about this is that it’s not just a tiny snippet we’re getting among the clips. In total, it’s 17 minutes and 57 seconds of deleted and extended scenes! We get to see several of the characters in a more in-depth way here, which is always interesting to see.

The last feature is the lyric video of the iconic song “Carolina” that was written and performed by Taylor Swift, specifically for this film. As a huge Swiftie, I will admit I was already very familiar with the song. The song is breathtaking, haunting, and PERFECTLY written for this film. The lyric video shows scenes from the film while the lyrics display complimentarily on the screen. The lyric video is simple yet powerful, just like our film’s protagonist.

There’s also a “Previews” selection on the menu which includes a lot of trailers that were shown prior to getting to the main menu of the disc.

This product is filled with great new content you can’t get anywhere else. If you’re a fan of novel and film, you’ll definitely want to pick up a copy! “Where the Crawdads Sing” is available for purchase on blu-ray/DVD/digital on 9/13/2022. Grab your copy HERE!

And if you haven’t already, please check out our EXCLUSIVE interview with Taylor John Smith below!