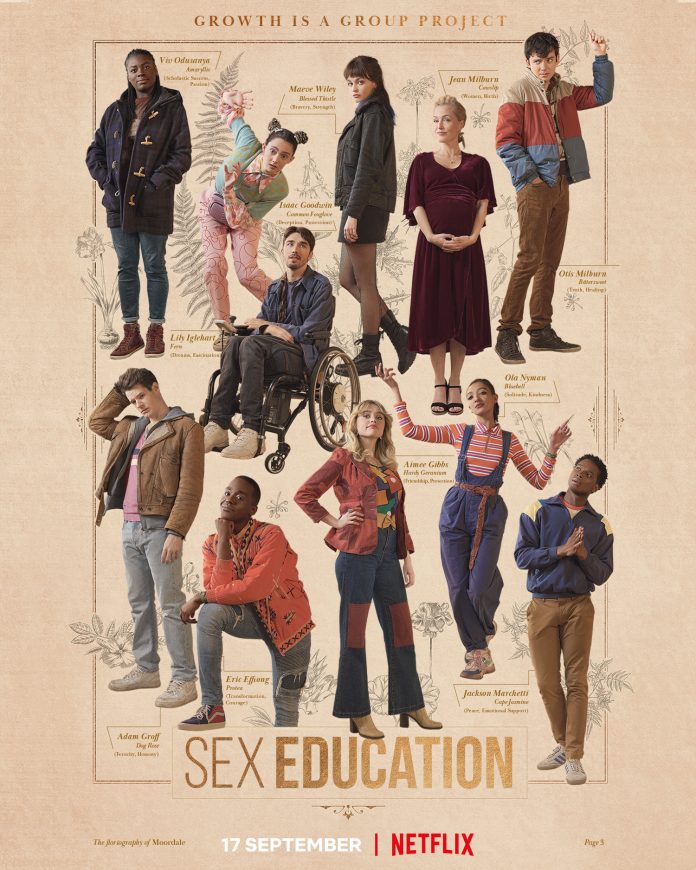 We watched the newest season of Netflix’s Sex Education, and it did not disappoint. Read on to see why you should run, not walk, to your TV and dive in to this epic new season.

It’s a new year, Otis is having casual sex, Eric and Adam are official, and Jean has a baby on the way. Meanwhile, new headteacher Hope (played by Jemima Kirke) tries to return Moordale to a pillar of excellence, Aimee discovers feminism, Jackson gets a crush and a lost voicemail still looms. Prepare for commitment animals, alien phenomena, vulva cupcakes and much more of Madam Groff.

Attention: SPOILERS. It’s impossible to review an entire season of a show with zero spoilers, but I did my best to not have too many spoilers/ major giveaways. Regardless, consider this your spoiler warning!

This season of Sex Education is jam packed. There’s so much to unfold, and so many characters who embark on journeys this season, some which are overdue, some unexpected, and some that will be surprising to viewers. I absolutely loved this season. It picks up similarly to how Season 2 picked up from Season 1. A little time has passed, but not much. It begins with a brand new school year starting and the summer has passed. That fateful voicemail remaining unheard.

Nearly all of the characters this season show huge growth, and no one displays this growth as clearly as Adam. His self-growth journey started last season, and continues throughout this season. He’s practically an entirely different character from Season 1. His growth doesn’t come without its complications though, and what I think is important too is to understand that everyone is on their own individual journey and evolves in their own time. It really can’t be sped up or slowed down, despite how much that might be desired. Also showing a lot of growth this season is Otis. Long gone are the days of his apprehension with masturbation. He also matures a LOT in this season. As we all know, his mother Jean is pregnant, and with that comes a change in dynamic for Otis. The old Otis would probably have gotten very upset at the changing dynamics in his home, but that is nowhere to be seen in Season 3 Otis. It’s very refreshing. It also leads to Otis realizing what Maeve, and all of us viewers, have been seeing all along – Otis truly has a passion for helping people, and he’s quite gifted at it. There’s a really sweet moment with Otis and Jean where they discuss this, and it’s one of my favorite mother/son moments we get with them. Also noteworthy is the hilarious pregnant Jean moments we get this season.

In addition to the teenagers showing all kinds of growth this season, the adults are right there with them. Like his son, Mr. Groff comes out on top here. I was surprised at how much I rooted for him this season, after despising him so much previously. But we learn more of his backstory, and it really humanizes him as a character. Not to be left out, Mrs. Groff is right behind him in terms of self-discovery. We saw her take those brave first steps towards it last season, and she continues down that path in Season 3. It’s very empowering to see her come into her own. I love seeing her unconditional love for Adam, as well as her friendship with Jean. In a surprising turn of events, she also spends time with Aimee this season, and there’s a lot of comedic moments here. Another unlikely friendship we get this season is Adam and Rahim. I won’t spoil much here except to say that the writers could have gone the “easy” route and made this all about Eric and the friction between the three characters due to their dating history, but they didn’t. Instead we see a lot of supportive moments and a lot of kindness in ways you wouldn’t expect among them. This is one of the many reasons Sex Education stands out from all other teen dramas.

This leads me to the relationships. This season of Sex Education will see a lot of unforeseen romances, and I was quite shocked at some of them. But I think what’s beautiful about some romances is that even when the couple wasn’t meant to work out, you can still learn a lot about yourself and grow from that relationship. This is very much the case in some of the romances we get this season. Sometimes relationships also need to end not because the person doesn’t like or love the other person, but because they need to focus on themselves. And that is entirely ok. I think this is an important lesson to learn at any age, but especially when you’re a teenager or young adult. We’ll see a resurgence of some other pairings as well, and while I won’t spoil it for you, what I will say is that Otis and Maeve are finally honest with each other. We’ve seen each dodge around what they are really feeling for two seasons, and finally they have a few discussions where it’s out on the table. But you’ll just have to tune in to see how it unfolds.

One thing I love about this show are the friendships. The friendships in Sex Education are just as important as the romantic ones, if not more so. Previously, we saw a lot of tension and strain on Eric and Otis’s friendship at times, but I’m happy to report this season they are rock solid. As seen in the trailer, Maeve and Aimee do have some bumpy roads ahead, but I also think it leads to a beautiful moment in their friendship. Those first fights with a friend are always the hardest, as you cross into a territory that’s scary and filled with anxiety, and that’s something I feel like most teenage friends have experienced. All of the friendships and relationships we see on the show made me feel sappy about blended families, and the families that we create. Sometimes you aren’t born into the best of families, but the older you get, the more you get to choose who becomes your family. Maeve is a prime example of this, but we also have seen glimmers of this with Otis’s absent father and Aimee’s flawed mother. Jackson and Viv continue their friendship this season, but the dynamic is changed with newfound school pressures and a love interest on Jackson’s part. They become at odds with each other, and I think their differences really play a big part in this. Viv has always been the rigid, rule-follower type while Jackson is more laid-back and not afraid to break the rules. Viv’s arc this season, and especially in the last episode, where she learns to stand up for what’s right – which is sometimes against the rules – was really great to see. Viv gets a lot of redemption this season and I am here for it.

It wouldn’t be Sex Education if I didn’t discuss, well, sex education. This topic is at the forefront this season but in a different way. Mr. Groff’s departure means a new headmaster for Moordale, and let’s just say her views on sex education are the exact opposite of what Jean was teaching in the school. This backwards approach comes to a head in the final season, and we get a tease of what’s to come in the next season, if there is one. PLEASE Netflix, let there be a Season 4!

All episodes of Sex Education hit Netflix on September 17th! To get more details about the series, visit www.netflix.com/SexEducation.