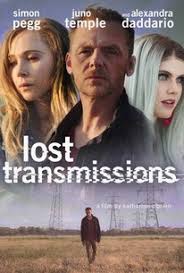 Simon Pegg’s newest movie is a bit of a departure from his usual comedy.  In Lost Transmissions he plays Theo Ross, an older man with schizophrenia trying to navigate his life and his illness in a way that makes sense to him.  Along the way he meets Hannah (Juno Temple), a 20-something woman struggling with her own demon, depression.

When not having a schizophrenic episode (because he’s taking his meds!), Theo is a highly capable and respected music producer.  Hannah is an aspiring songwriter whom Theo takes under his wing and starts on a successful career path.  I know what you are probably thinking, but stop it now, this is not a love story.  There is no romance between these two characters.  There is a respect that progresses into a rather intense friendship as Theo’s disease begins to destroy the career and personal relationships he had thus far managed to maintain.  As Theo’s life rapidly unravels, Hannah inadvertently places herself in charge of Theo’s care.  But what she quickly realizes is that looking out for Theo is a difficult and daunting task. I feel I should warn you that the movie could be triggering, particularly if you have friends or loved ones with a mental illness, or you struggle yourself.  The story is based on a true story, and much like real life, the story has beautiful moments of light and love and hope followed by darker moments of fear, despair and anger.

Pegg and Temple did an amazing job bringing their character’s mental health conditions to life honestly and humanely.  I never felt like either disease was being exploited for the purpose of film making.  I also appreciated that while mental health was clearly a main plot point, the characters were allowed to be more than just depressed or schizophrenic.  They had lives which needed to be lived and people who loved and depended on them.  I won’t tell any more of the story because it is worth watching.  I don’t really recommend this for younger audiences, kids are not the target demographic here, but for the rest of the population, know there is no sex, little cursing and no gun violence.  There is, however, a powerful visual display of how easily mental illness can ravage the life of its host and affect the people who love him or her.

Lost Transmissions was directed by Katherine O’Brien.  It opens March 13 in select theaters, digitally and on-demand.