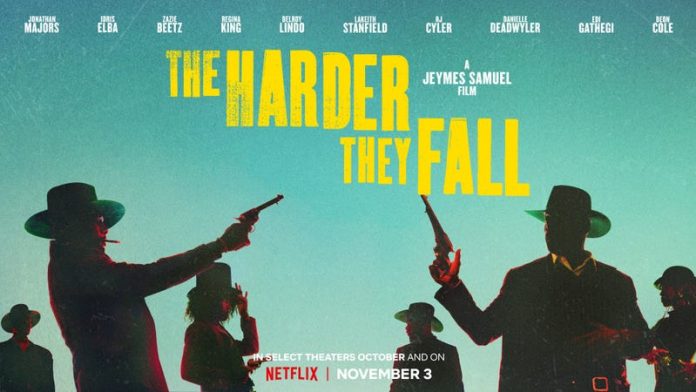 From Netflix and the vision of writer and first time director Jeymes Samuel, comes this big-scoped western with a new, fresh perspective on the big screen. Jeymes Samuel’s ‘The Harder They Fall’ tells the story of the black cowboys and black women of the wild west and real historical figures such as Rufus Buck, Nat Love, Trudy Smith, Mary Fields, Bill Pickett, Cherokee Bill and more who lived during these periods. A star-studded, talented cast starring Jonathan Majors (Lovecraft Country: TV Series), Idris Elba (The Suicide Squad), Zazie Beetz (Joker), Regina King (Watchmen: TV Series), Delroy Lindo (Da 5 Bloods), Lakeith Stanfield (Get Out), RJ Cyler (Power Rangers), Danielle Deadwyler (Gifted), Edi Gathegi (The Blacklist: TV Series) and Deon Cole (Black-ish: TV Series). Samuel and his cast bring style, swagger and sophisticated grit to the wild west backed by a wonderful score and soundtrack featuring black music from across the world such as Reggae, African Afrobeats, UK Grime and Hip Hop. Just as ‘Coming to America’ and ‘Black Panther’ did, ‘The Harder They Fall’ may have evolved another part of the film industry’s iconic genre for a new generation of film fans. It shows an important part of black African American history that has hardly been portrayed on the big and small screen, not since the efforts of Mario Van Peebles in the western ‘Posse’ (1993). And not much more, as 1 out of every 4 cowboys were black in the American West as estimated by historians and statistics. The intro brings a very funky/stylish graphics and animation introducing a great soundtrack from Jay-Z, Kid Cudi and Jeymes Samuel. The song “Guns Go Bang” introduces the characters in a slight nod to blaxploitation movies, spaghetti westerns of the 1970’s such as a fistful of dollars, shaft etc. in its style. There is also a very classy but subtle tribute to Chadwick Boseman in the film.

‘The Harder They Fall’ handles the theme of good versus evil and and villains versus those who are perceived to be good with subtle shades of grey. What if your mortal enemy was driven by similar traits, one man driven by vengeance and injustice while the other is driven by loyalty and the quest for freedom by any means necessary, crossing that moral line without hesitation. Does the ends justify the means ever? Nat Love (Majors) and Rufus Buck (Elba) head on a collision course for the ultimate showdown. The movie soundtrack features Seal, Jeymes Samuel, Kid Cudi, Jadakiss, Barrington Levy, Backroad Gee, Jay-Z, Fela Kuti, Dennis Brown and many more musical talents of the past, present and future, representing various parts of the African diaspora in front of and behind the screen.

‘The Harder They Fall’ was produced by Shawn ‘Jay-Z’ Carter, James Lassiter and Jeymes Samuel. After premiering on Netflix it quickly reached number one on Netflix’s Top 10 list.

‘The Harder They Fall’ is available to stream on Netflix.