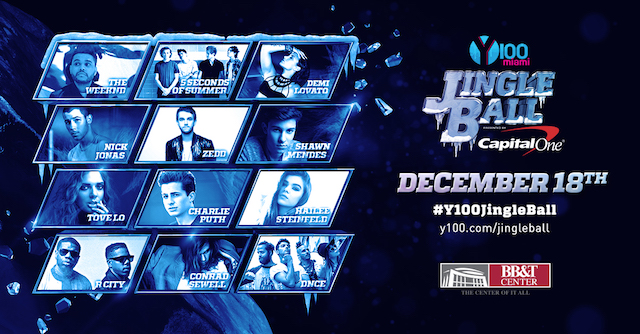 Chants and screams could be heard from backstage as fans waited for their favorite artists to hit the stage at Miami’s Y100 Jingle Ball event. With the lineup they had this year, no wonder it was sold out.

The show kicked off with 5 Seconds of Summer and—as it’s my third time catching these Aussies live—they didn’t disappoint with their energized set and the best of the best of their 2015 songs.

Some of my personal favorites from last night were R. City, Demi Lovato, and, DNCE. The dynamic brother duo of R. City blew me away with their recount of how their hit song, “Locked Away” ft. Adam Levine came about. Sharing with concert goers about when their father was locked away and what he would ask their mother. It gave the song a deeper meaning and made it more personal for listeners. Making the performance a MILLION times better! R. City has gained an extra fan with me, and I can’t wait to follow their music careers!

Demi Lovato SLAYED the stage, as to be expected from the queen herself. Unapologetically, not only singing some hits, but also songs she wanted to share with her lovatics. And when she messed up the intro to a song due to just getting rid of a cold, she stopped singing and said, “what the f—k note was that?” sending the crowd into bouts of laughter and showing just how amazing and normal Demi is, as she isn’t afraid to call herself out.

As for DNCE, I had been waiting on the edge of my seat for their performance. The Joe Jonas fronted band are making waves this year with their break out hit, Cake by the Ocean, and I only see success for this new band. They played the songs on their EP titled, Swaay, and if you haven’t heard it yet, then you’re failing at life. Hurry up and give it a listen! As for Jingle Ball, their set was filled with prankster antics, and an energy that was so fun and jovial, I can’t wait until they go on tour so I can catch them live again!

Ending the show was The Weeknd—who is performing this weekend at The Fillmore Miami Beach—and he ended Jingle Ball with a bang! Singing all of our favorites and rising the temperature of the BB&T Center in Ft. Lauderdale just a few notches.

If you’ve never attended Jingle Ball, I suggest you start saving now, and clear your calendar, because this isn’t an event you want to miss next year!

Check out our Instagram: @hollywoodnewssource for exclusive red carpet photos and videos of last night’s performances!

Did you attend Jingle Ball in either Miami or your nearest city? Let us know your thoughts by tweeting us @HNewsSource & @TweetsByKarina