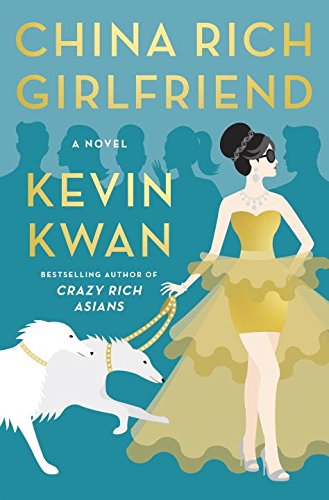 Kevin Kwan, bestselling author of Crazy Rich Asians, is back with a wickedly funny new novel of social climbing, secret e-mails, art-world scandal, lovesick billionaires, and the outrageous story of what happens when Rachel Chu, engaged to marry Asia’s most eligible bachelor, discovers her birthfather.

On the eve of her wedding to Nicholas Young, heir to one of the greatest fortunes in Asia, Rachel should be over the moon. She has a flawless Asscher-cut diamond from JAR, a wedding dress she loves more than anything found in the salons of Paris, and a fiancé willing to sacrifice his entire inheritance in order to marry her. But Rachel still mourns the fact that her birthfather, a man she never knew, won’t be able to walk her down the aisle. Until: a shocking revelation draws Rachel into a world of Shanghai splendor beyond anything she has ever imagined. Here we meet Carlton, a Ferrari-crashing bad boy known for Prince Harry-like antics; Colette, a celebrity girlfriend chased by fevered paparazzi; and the man Rachel has spent her entire life waiting to meet: her father. Meanwhile, Singapore’s It Girl, Astrid Leong, is shocked to discover that there is a downside to having a newly minted tech billionaire husband. A romp through Asia’s most exclusive clubs, auction houses, and estates, China Rich Girlfriend brings us into the elite circles of Mainland China, introducing a captivating cast of characters, and offering an inside glimpse at what it’s like to be gloriously, crazily, China-rich.

Crazy Rich Asians is a hit and miss read for most readers. There is a precise element in the storytelling that would either irk you or hooked you up. For me; however, this book triumphantly won me over. The sequel, China Rich Girlfriend, isn’t an exception. Once again, I fell in love with the glamour, and its preposterous humor.

China Rich Girlfriend picks up two years after the events of Crazy Rich Asians. Nick succeeded in winning Rachel back. Good news! They’re finally getting married — much to his family’s disapproval. Meanwhile, Astrid managed to salvage her marriage with Michael. Though it comes with a deadly price. There are countless appalling twists, such as reformed Kitty Pong, a Chinese heiress named Colette, a bad boy pegged as Asia’s Prince Harry named Carlton. The most shocking of them all, Rachel might finally meet her biological dad.

“Beauty fades, but wit will keep you on the invitation lists to all the most exclusive parties.”

The humor of this series is what initially drew me in. It reminded me of my childhood filled with binging East Asian dramas. The comical tone would raise your brows. It’s ridiculously funny or it’s simply bordering offensive.

However, Crazy Rich Asians isn’t only a staple of Chinese wit. Kwan colossally integrated the vibrant culture of Chinese-Singaporean, and the mesh tradition of other Asian countries such as Malaysia, India, and more. I particularly love the foreign phrases Kwan introduced, and the footnote explanation. It’s an ingenious method to rope in the readers while simultaneously familiarizing them in an uncharted culture. I have to admit the constant talk of food made me really hungry. This book is my definition of fun.

Similar to the previous installment, China Rich Girlfriend didn’t shy away from classism, and the racism within their community. The stratagem about keeping the bloodline and legacy pure, old money vs new money, the racial tension between Mainland Chinese and Overseas Chinese was very interesting to read. It’s liberating to read a story that isn’t told from a western lens.

I adore the comeback of my favorites, Nick, Rachel, and Astrid. They are the heart and the backbone of this trilogy. While, these books are fun without these core characters, the story wouldn’t have survived.

In conclusion, I would recommend this trilogy in a heartbeat. It’s not an everyday occurrence we get to read a story that isn’t overwrought. China Rich Girlfriend is fun and refreshing.