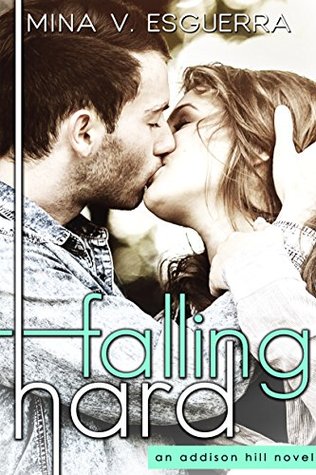 She knows it won’t last…
Nicholas Cevasco is unlike anyone Daria Kramer has ever dated. But they aren’t really even dating – a fast fling is all they have time for. He’s heading to Japan to play pro rugby, and she’s graduating in three weeks with plans of her own.

That doesn’t mean they can’t have fun…as long as they don’t fall hard.

This title was previously published as The Harder We Fall.

One of the highlights of my February – March period was binging Addison Hill. It easily became one of my favorite series. It’s simple, and it would hit your romance spot perfectly to the bone. I would recommend it in a heartbeat.

Falling Hard follows the story of Daria Kramer, a journalism intern aiming to bag the most coveted position. But, in order for that to happen, she must step out of her comfort zone. Her plan is to explore the rugby team of the Addison University. There, she met Nicholas Cevasco, a rugby player and an alumni of the university she attends to.

Esguerra’s characters are well crafted. I adore the undeniable chemistry between Daria and Nicholas. There’s no strain in the plot. It is short, which comes in handy when you’re in a reading slump. The novel slightly breaks free from its genre’s formulaic tropes. There’s no prolongation in the drama department. The writing is simpleton while remaining to be gripping as well. It’s too easy to fall in love with Jake. Don’t do it.
Despite living in two different countries, Lindsay Kresta and Jake Berkeley have loved each other as friends since their senior year in college. She’s his emergency contact, his “zombie apocalypse buddy,” and his holiday dinner companion.

But now that he’s known as Jacob Berkeley, star of a wildly successful TV show, he shows up with big news days before her big work conference. He wants to save forests again, work in environmental research…and he wants her.

Don’t fall in love with Jake. Easier said than done.

This title was previously published as Never Just Friends.

The second book in the Addison Hill, “Fallen Again” feature best friends’ Lindsay and Jake. He’s a reality star of a successful, adventurous, mystery show. Hot, sensible, a darling dressed like a daydream. While, Lindsay is the business-oriented heroine who happens to be his zombie-apocalypse buddy. They try so hard to keep their friendship as platonic as they could be, but some things are completely inevitable.

When authors repetitively bait their readers with the same gray tropes, it gets exhausting easily. One of the things I noticed about this series, Esguerra doesn’t suspend the “get together” of her characters. I like how that is not the focal stress. You could actually experience the characters rehashing their history and making new memories together. You get to see them in a relationship rather than the whole I-am-chasing-you spiels without the character buildup.

In addition, I genuinely enjoyed the nerdy quips of Lindsay and Jake. Zombies and apocalypse? Sounds, like The Walking Dead relationship goals. “Go out with a stereotypical romance novel hero WHO ISN’T YOUR TYPE.”

Avid reader and art student Steph is participating in a monthly blog challenge to Live Like Fiction, and this was the task for October. When Grayson, former co-captain of her university rugby team, walks into her class, she knows it’s meant to be – she has to go out with this guy. Even if she’s never been attracted to big, hunky, athletic types. With Grayson’s “player” reputation off the field, Steph thinks he’ll be good for one date that’ll be worth blogging about, and that’s it.

But you know how it goes: Soon, it becomes more than just one date – and Steph and Grayson are caught up in “living like fiction.” How long can they keep playing their roles before reality steps in?

Learning to Fall is my favorite installment from this series.

Expect a lot of failings below.

Steph is an avid reader and a book blogger who recently flunked the last semester of her academic college year. Therefore, she recently decided, she must take on hiatus from the blogging community. In addition, she pronounced, she would participate on the monthly challenge Live Like Fiction.

The task for this month is Go out with a stereotypical romance novel hero WHO ISN’T YOUR TYPE.

Conveniently, she met Grayson, who posed as a seminude model for her art class. He is the former co-captain of her university’s rugby team. Athletic, hunky, briskly. She instantly knew, he is the one. Soon after, they get tangled up “living like fiction.” Will they ever find the courage to live their life without the restriction of fiction?

I didn’t expect to fall in love with Learning to Fall. I purposely lowered my expectations because I adore Falling Hard so much, I thought nothing could debunk that. But, here we are.

I like how the story started out in a straightforward note. Steph asked Grayson on a date.

“Will you have dinner with me?” I blurted out.

It was as good a time as any.

For my case, Learning to Fall started out a bit slow, I almost ditched it. Woops. As I’ve iterated, I have plenty of expectation for it. But, I’m glad I stayed because the rest is truly worth it.

Grayson isn’t portrayed as the dumb-jock who likes to f*ck a lot. He does sleep around, but it’s not something that is negatively symbolized in the book. He just happens to sleep around. There’s no degradation for his character and for the women he had a relationship with. I truly like how he’s written. He’s not an asshole, which is a start for me. He’s level headed who haw his priorities straight. While Steph, on the other hand, is still your home-girl heroine who likes to read. But unlike me, she can actually pick up guys for dates.

I love their interaction and banter. Their relationship might have started with a fake-dating trope, but eventually it evolved into something that is founded by mutual love and respect. They are so cute.

Here’s one of my favorite scenes from the book:

The look of horror on his face made my giggle upgrade into belly laughing. “That’s your type, then? That’s why you’ve ignored guys like me for years?”

What could I say? Guilty as charged. Darren, Stefan, every guy I’d lusted after, they were dark-haired, somewhat lean, guys I never saw sweaty or disheveled. Nathan, handsome as he was in the ways that could’ve triggered interest in me, was already more rugged than I’d have liked. I thought I’d fall for an artist or a scholar.

“How many times am I going to pay for that?”

This particular part speaks to my soul. This is a testament, there are thousands of romance books out there, where women have their head around their shoulder.

“Hey,” Grayson said, nudging my foot under the table with his.

“I think you have enough to eat over there without having to share my food.”

“Not the food. Motivation, or something.”

“Oh please,” I said. “This is not one of those times when the solution is going to be a man.”

“I mean, your problem can’t be fixed by my feminine wiles. My looming problem has nothing to do with you, too.”

“Then I’m not a man lumbering in to solve your problem,” he said. “I’m a coach. ‘Cause it looks like you never had one, since you never liked the type.”

If you’re still not convinced why you should pick it up:

I highly recommend Addison Hill to everyone who are looking for a fast paced romance.