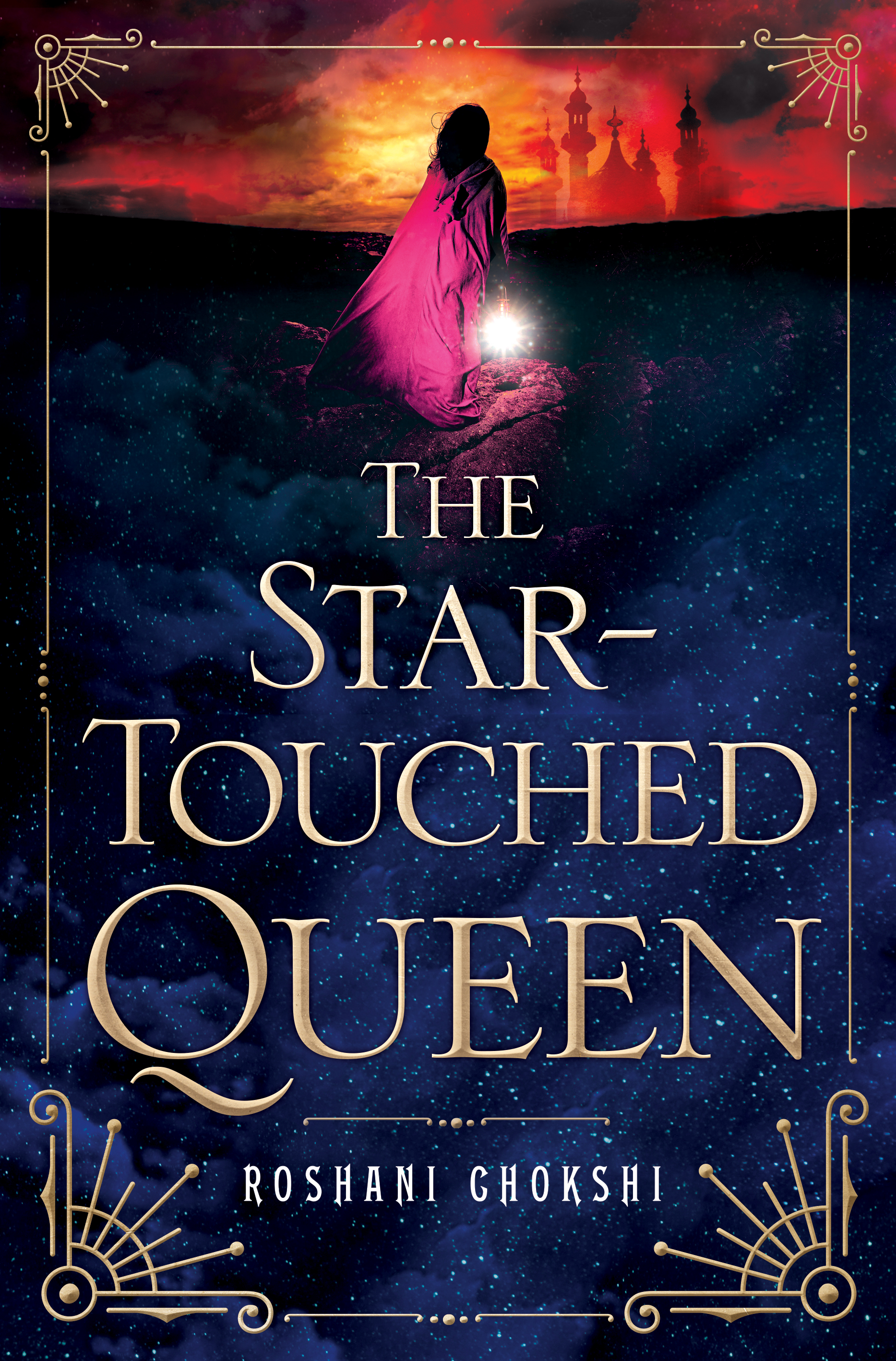 Welcome to The Star-Touched Queen blog tour! I recently finished this lovely debut by Roshani Chokshi. It is imaginative, driven by the swirling sentimental writing, accompanied by the lush Indian mythology. Today, the author answers some of the burning question about the book, and more.

About The Star-Touched Queen

Fate and fortune. Power and passion. What does it take to be the queen of a kingdom when you’re only seventeen?

Maya is cursed. With a horoscope that promises a marriage of Death and Destruction, she has earned only the scorn and fear of her father’s kingdom. Content to follow more scholarly pursuits, her whole world is torn apart when her father, the Raja, arranges a wedding of political convenience to quell outside rebellions. Soon Maya becomes the queen of Akaran and wife of Amar. Neither roles are what she expected: As Akaran’s queen, she finds her voice and power. As Amar’s wife, she finds something else entirely: Compassion. Protection. Desire…

But Akaran has its own secrets — thousands of locked doors, gardens of glass, and a tree that bears memories instead of fruit. Soon, Maya suspects her life is in danger. Yet who, besides her husband, can she trust? With the fate of the human and Otherworldly realms hanging in the balance, Maya must unravel an ancient mystery that spans reincarnated lives to save those she loves the most. . .including herself.

A lush and vivid story that is steeped in Indian folklore and mythology. The Star-Touched Queen is a novel that no reader will soon forget.

Roshani: For Maya and Amar, they were inspired by the Hades/Persephone. But I imagined those two mythological characters a little more differently. In Maya’s case, I knew that ambition was her defining trait, but I wasn’t sure whether that would manifest as seeking emotional or material fulfillment. Turns out, it was a bit of both. Kamala was inspired by my love of fiendish side characters like Mogget from Garth Nix’s SABRIEL and is probably the character I relate to the most. Her sense of humor can be a little abrasive. But she’s fiercely loyal to her friends. Other people in TSTQ were inspired by a collection of people whom I met/knew/heard of growing up.

Question: Have you always been drawn to Mythology and what are some of your favorite mythological tales? What myth specifically inspired Star-Touched?

Roshani: Always! I was raised on mythology. It was one of the most important outlets for me to connect to my Filipino/Indian heritage. My favorite Indian myths are Shakuntula, Nala and Damayanti, and Savitri. My favorite Filipino story is the Igorot tale of the Sky Maiden. My favorite Western myth is Hades and Persephone. TSTQ was specifically inspired by Hades & Persephone.

Question: Let’s talk inspiration. What Indian folklore inspired The Star-Touched Queen and where could someone who might be interested in reading and learning more about it and other Indian stories (cough, me, cough) learn more?

Roshani: The main Indian folktales/myths that inspired TSTQ or particular scenes were: Shakuntula (plays on the idea of memory and forgotten loves), Savitri & Satyavan (bargaining with Lord of Death, wily females!) and Narasimha (the fourth avatar of Lord Vishnu who defeated the demon king Hirayankashipu). Honestly, most of these were stories I heard growing up with my family. But my favorite thing to read when I was younger were the Amar Chitra Katha comics! They’re these illustrated tales from Indian mythology and I love them so so so much.

Question: What scene in THE STAR-TOUCHED QUEEN was your favorite to write?

Roshani: Definitely the scene where Amar and Maya are working together in the constellation room. I think it’s an important scene about interpretation, which, to me, is a major theme in TSTQ.

Question: Did you listen to any music while writing this book? If yes, what would you say was your MOST played artist or song?

Roshani: Sometimes I listen to music when I write. It just depends on whether the song is distracting me or fueling some weird atmospheric part of the scene. Sometimes it’s just one song on repeat. I listen to a lot of hip hop. And when I pretty much rewrote TSTQ in February 2015, I felt furious. Not with anyone. But just with the story. Like it was itching to be told right and I was failing it. I think the songs I listened to the most with TSTQ was either Kid Ink’s “Show Me” or Kendrick Lamar’s “Poetic Justice.”

Question: What is your dream movie cast for STAR-TOUCHED?

Question: What is the most exciting part about publishing your first novel?

Roshani: Interacting with readers. Talking to the YA community gives me so much life.

Question: How did you build your world and keep everything straight for STAR-TOUCHED? Flashcards, charts, webs, etc. I know everyone has their own tricks!

Roshani: Flashcards, backs of receipts, corners of napkins. Which is to say, I did not keep things straight at all. This is why you have beta readers. To throw virtual tomatoes at you and point out that given the rules of your world, you cannot do the thing you just did.

Question: What is your next project? Is it in the same world as STAR-TOUCHED?

Roshani: I just finished the companion novel to TSTQ! So, I’m hoping to get started on edits soon. I can’t wait for y’all to read it. I love it so much.

Question: What is the one thing you want readers to walk away from STAR-TOUCHED with?

Roshani: I hope readers see a little of how fairytales and folklore celebrate our shared experiences across cultural spectrums. And I hope their dreams are a little star-touched and that they close the book thinking they’ve tasted fairy fruit and walked through more than one life. Roshani Chokshi comes from a small town in Georgia where she collected a Southern accent, but does not use it unless under duress. She grew up in a blue house with a perpetually napping bear-dog. At Emory University, she dabbled with journalism, attended some classes in pajamas, forgot to buy winter boots and majored in 14th century British literature. She spent a year after graduation working and traveling and writing. After that, she started law school at the University of Georgia where she’s learning a new kind of storytelling.