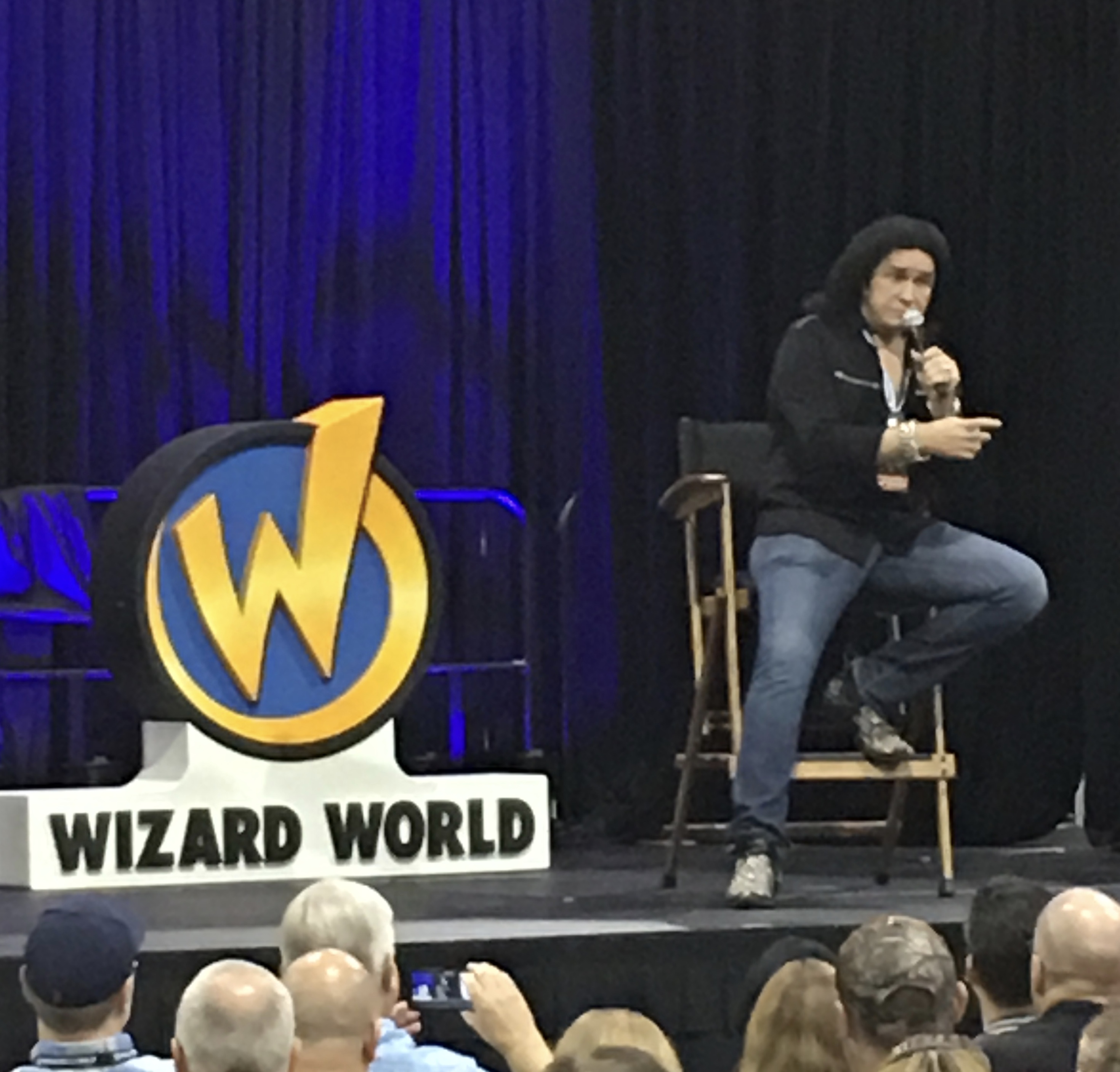 This weekend, fellow HNS reporter Deanna Campbell and I attended the Wizard World Comic Con in Richmond.  We are both regular attendees of Wizard World Comic Cons, and this was an event we’ve looked forward to for months.  It was the third year the folks of Wizard World brought Comic Con to Richmond, and every year I am more impressed with the guests and the con itself.  It is smaller than some others Wizard World hosts, which means there is more time for guests to interact with the Stars and celebrities they are there to see.  It is a calmer, gentler Comic Con. However, the celebrities are still there, the awesome merchandise is available and people still cosplay like nobody’s business.  Note: Amazing cosplaying was witnessed this weekend! Our Saturday started with a Q&A with a little known member (HA!) of a little known rock band called KISS (HA! HA!).  Gene Simmons spoke with fans, educating them a bit on world history (which was really fascinating; this guy is smart) and the evolution of the band and its image over the years.  As a nice touch, the Q&A was held in the main auditorium so literally everyone attending could listen or participate without waiting forever in a line or jockeying for seats.  Nice touch, Wizard World!  I thought this was a great way to let everyone who wanted to, enjoy the Q&A.  As I mentioned, Simmons was really an interesting guy but he was also gracious with his fans and spoke kindly to everyone.  He was impressive. Next, Deanna and I went and stood in a manageable line for the lovely James Marsters, best known in my world as Spike in Buffy the Vampire Slayer.  I am a huge Buffy fan and could gush all day about this visit, but I’ll just allow your imagination to take over as to how giggly I can get.  Luckily, I have met Marsters before so I could present myself as a (mostly) rational female adult.  Deanna has never even watched Buffy (I know, I know.  Don’t get me started on this) so Marsters was new to her in every respect.  She’s officially a believer in anything he has to say/sell/perform in, you name it.  He was great.  He took time with each fan and appeared to be genuinely interested in meeting them and giving them their moment.  It was fun to watch and great to experience.  Thank you, James.  Also terrific is his best friend, Mark Devine, who helps fans by chatting them up while they are waiting to speak with Marsters.  He’s hilarious and very easy to talk to.  They are a good team.  Which brings me to…. VIDIOTS!  This is Marsters and Devine’s latest project which looks like it will be a lot of fun. You can follow the duo’s antics as they traipse around the world, visiting cities and (most importantly) playing video games.   Visit the page link above and check it out for yourself, there is a “preview” to get you started on this new web series.  More to come on Vidiots!

Next we went and spent some time with the good people of Newegg as they introduced us to the world of VR gaming.  Here’s Deanna…. I know it doesn’t look like much, but the world she sees around her is immersive and amazing.  What a fun demo that was!  This is going at the top of my Christmas list and I am not a big gamer, traditionally.  I think this could change my mind because it was so great.  Thank you, Newegg, my kids are super jealous!

Next, we attended a panel discussion with Ryan Hurst and Tommy Flannagan of Sons of Anarchy.  It was hilarious.  These are funny guys.  For sure the f-bomb count was HIGH and I had to admire the straight faces of the sign language interpreters as they waded through Flannagan’s scottish accent and liberal cussing to interpret for those who needed it.  Those two interpreters earned their pay during that panel.  Hehehe.  The guys answered many questions on the show, the show’s development, the violence and it’s ending.  In a nutshell, they are very proud of the work they did on the show and the quality of the writing, production etc but they were also very frank that they felt the show ended when it needed to end.  They said that everyone has moved on to new projects and is busy being happy and successful.  And yes, Flannagan kept his motorcycle. 🙂 We spent Sunday wandering around buying the traditional Comic Con t-shirts and Lego miniatures and going through artist alley.  We attended a panel discussion on developing your own comic book character that was so much fun.  We played some new version of Pac Man and tried our hand at Dark Souls III in the gaming area.  After that, we went to the James Marsters panel and had the treat of a surprise guest: James Contner.  Contner directed 30 episodes of Buffy the Vampire Slayer, but his career goes back decades and includes work on Jaws, The Wiz, Godfather 1 and 2, and lots and lots of amazing unforgettable television.  He and Marsters reminisced a bit about the Buffy set and answered questions from the audience.  It was a great panel! Wizard World hosts Comic Cons throughout the year at cities across the county.  There are three more this year and many already listed for 2017.  Every one of their events I’ve attended has been professional, organized and fan-focused. If you are looking for a family-friendly event or just the chance to geek-out with people who “get it,” this is a good choice.