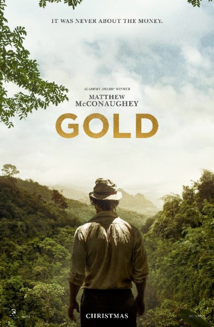 GOLD, inspired by actual events, is the epic tale of one man’s pursuit of the American dream and everything he’ll do to keep it from falling apart.  Oscar© winner Matthew McConaughey stars as Kenny Wells, a man raised in the mining business and desperate for a lucky break.  He teams up with a mythic geologist and sets off on an amazing journey to find gold in the uncharted jungle of Indonesia.  When they make the largest gold find in history, Kenny realizes his dream was only the beginning of the adventure, battling corrupt politicians, Wall Street tycoons and law enforcement, all of whom want to take it from him.  Directed by Oscar© winner Stephen Gaghan, the film stars Oscar© winner Matthew McConaughey and Golden Globe© nominees Edgar Ramirez and Bryce Dallas Howard.

GOLD offered an in-depth look at one man’s journey and determination to find success. What I liked about the way the film told the story was that it showed the completeness of his insane journey. The film didn’t shy away from showing the extreme highs and the severe lows. It gave a realistic glimpse inside the lives of those who ultimately achieve success and also those who crash and burn.

I couldn’t talk about the film without mentioning the insane transformation of Matthew McConaughey. In some scenes, he is virtually unrecognizable. The weight gain and overall disheveled appearance he sports in the film is a huge divergence from the McConaughey we’re used to. This drastic change really sets the stage for his character and the roller coaster he embarks on.

Bryce Dallas Howard and Edgar Ramirez also gave fantastic performances. Howard as the loyal rock behind our protagonist Kenny and Edgar as the loyal friend that is the true mastermind behind the success. There’s a HUGE twist at the end that I did not see coming. In hindsight, there were subtle hints throughout the film that makes it less surprising, but I was still shocked by the revelation. I’m not going to spoil this part, so do yourself a favor and go see GOLD in theaters on 1/27/17!