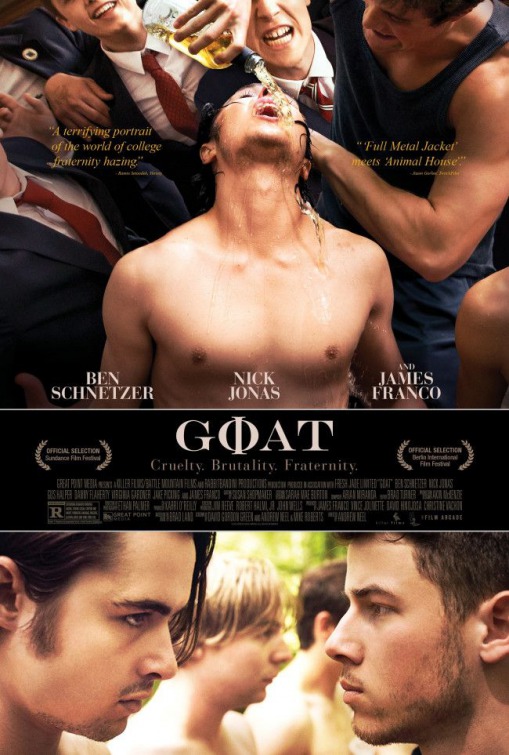 Check out our film review for the jaw-dropping, OMG-inducing, Goat. Synopsis:
Reeling from a terrifying assault over the summer, 19-year-old Brad Land (Ben Schnetzer) starts college determined to get his life back to normal. His brother, Brett (Nick Jonas), is already established on campus and with a fraternity that allures Brad with its promise of protection, popularity, and life-long friendships. Brad is desperate to belong but as he sets out to join the fraternity his brother exhibits reservations, a sentiment that threatens to divide them. As the pledging ritual moves into hell week, a rite that promises to usher these unproven boys into manhood, the stakes violently increase with a series of torturous and humiliating events.  What occurs in the name of ‘brotherhood’ tests both boys and their relationship in brutal ways.

In typical James Franco jaw-dropping fashion, Goat delivers as an intimate look at the lives of frat boys. The characters were really interesting in the film, and while some presented only one-dimensional (which is what the film aimed to achieve), several other characters had multiple layers and a lot of internal conflict as they weighed their options in dire circumstances and toyed with the fine line between right and wrong. The concept of what humans are scarily capable of is no new discovery, but it was really interesting to see it presented on a smaller scale, set on a college campus, and happening to young, eager-to-please freshmen. The film is not for the faint of heart, as some scenes are raw and might be difficult to watch the intensity and abuse. If you’re a fan of Franco’s work (Palo Alto, Spring Breakers, etc.) like I am, then you’ll find Goat equally appealing.