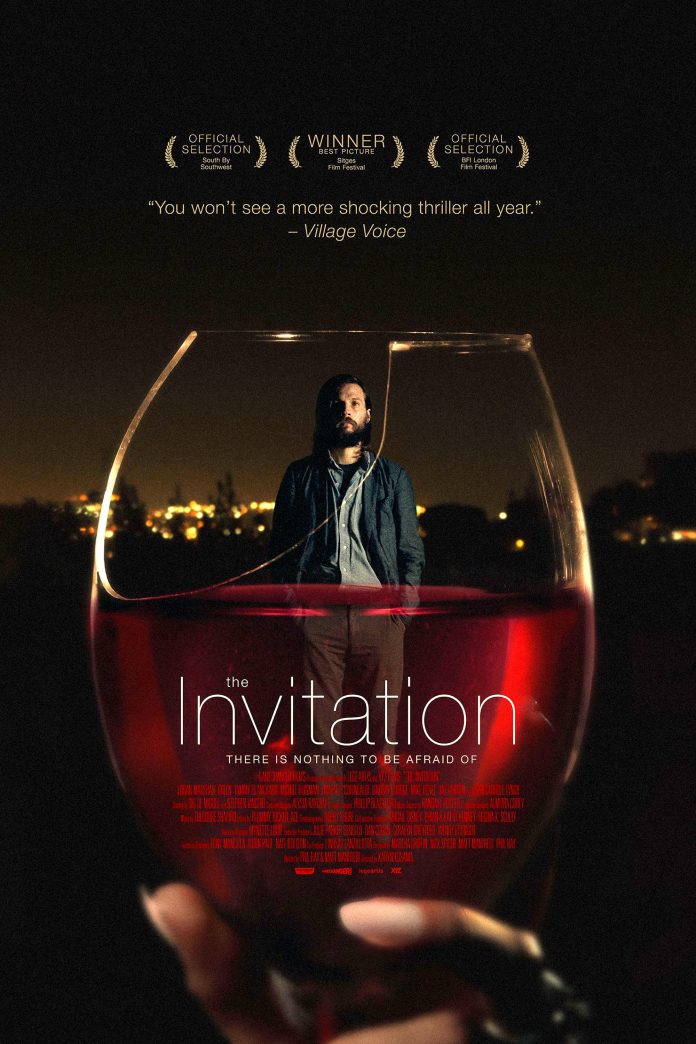 Fans of suspense and horror will want to check out the movie “The Invitation” due out on DVD TODAY, July 26th.  This is a really good movie.  Like really good.  The director and actors take what is assumed to be an ordinary dinner party and deftly reshape it from slightly uncomfortable to full-on horrifying with each passing moment.   Throughout the movie you know something is not as it seems and your mind races through various possibilities as the story unfolds.  It’s natural that this occurs, but here’s a tip: you won’t figure it out so just sit back and enjoy.  HNS was recently given the opportunity to interview the Director of the movie, Karyn Kusama, and talk to her about the making of the film and her creative process.  Kusama’s husband, Phil Hay, is also one of the two writer’s of the script.  Before we get into the interview go ahead and watch the creepy trailer for the film:

Creepy, creepy, creepy.  It starts from the first moment and just does not let up.  I loved it.

SPOILER ALERT!!!  I’m walking a fine line of spoiler-ship with this Q&A.  Certainly you can read it before watching the movie but I suggest you do yourself a favor and watch the movie first!!  You can find the movie on DVD or download it.

HNS: The cast for the movie is so good.  Where did you find the actors?  Had you previously worked with them or did you discover them in the casting process?

K. Kusama: A couple of people were completely new to me like Tammy Blanchard who played Eden, and Emayatzy Corinealdi who played Kira, well actually a lot of people were new to me.  But I felt like I put together a cast that felt like real people.  Even thought for the most part there might be one or two actors who had a different way into acting, for instance Jay Larson who played Ben started as a comedian. But really everyone was such a good, present actor when I worked with them, I felt so thankful.  It was fantastic.

HNS: So when you get a script like that what is your process?  This movie built suspense up from the beginning but did it by finely layering the levels of tension so by the end, as an audience member, you know something is going to happen and you’re like, “come on already!” Can you see all that happening in your mind when you read the script?  Did you know how to build that suspense from the get go?

K. Kusama: Any script I want to direct, I want to do it because I see it somehow, even if the way I see it shifts a bit as I am making the film. I feel like that’s the stuff that sort of connects me to the visual storytelling component of film making.  I definitely had a sense of the visual strategies that I wanted to be using but I was also very struck by, and relating to, the emotional component of our main characters’ journey.

HNS: One of the things I read that your actors said about you as a director was that you were great to work with because you were very open and collaborative with them. So I wonder, as a director, when you have this vision of how you want map out that finely tuned suspense, how do you go from scene to scene and still be “open and collaborative” without it screwing up your vision?

K. Kusama: I think it is very important to be open to other people’s opinions and see where those ideas might intersect with your own. I mean it is very important to come into the process with a pretty strong idea of what it is you want to do so that when you communicate that to everybody you know right away if people just don’t see the same movie as you do.  Luckily for me there was a real synergy with the actors and their ability to ask questions of the material, ask questions of themselves so that we could create within the architecture of the script. We were very faithful to the script itself, there wasn’t a lot of improvising.  It was amazing to work with actors who had the skill and could really work within the shades of the dialogue and the script and then invest it with their personal meaning and give it a soulfulness.  It was lovely to work with everybody that way, it was great.

HNS:  It was about half way through the film that I started thinking, “I don’t know what you would have had to do to lure me to my ex-spouse’s home, with her new husband… the home where <HA! I’m not telling!>

K. Kusama: The idea that he does.. it’s almost a sick impulse for him to go back to that house and see his ex-wife with a new man and be in a place that provided so much pain for him and was the source of so much suffering.  To me that ‘s very real, the idea that we keep going back to these places that are incredibly painful for us.  There is something very real about the idea of pain and that these characters…some of them kind of skirt over their pain and some of them kind of live inside it, but somehow that’s what the film really felt like what it was about for me.  The issue of suffering and how we don’t want to suffer but sometimes we need to so how do you balance those two very things.

HNS: Was it always in the script or your idea that the audience would be watching the night unfold through the eyes of Will?  It was almost like we were watching him, watch them.

K. Kusama: That was definitely a component of it.  On a technical level we had to root the point of view of the audience in primarily one character, which is Will.  He is on screen sometimes with 11 other characters and that requires so much technical work to actually create a physical reality around that. We didn’t have the time to have a more neutral storytelling or have the story unfold from multiple points of view.  Some audience members, they either understand that Will is unstable and also sympathetic or they mistrust him and wonder if he’s going to be the problem?  So it was always the plan to watch the evening from his point of view but then to also step back and see that he is also unraveling.  At some parts he seems to be lost and we wanted to play around with being human.  In Will’s case he might be, in the genre of paranoid filmmaking, both paranoid and right.

HNS: The actor who played Will, he was a master at communicating what he was thinking in his eyes.  It was really subtle movements but I could really feel confusion and pain and bewilderment.  The lower half of his face is covered in a beard but he’s still so very effective.

HNS: As the director, I would think there would be many that you were so proud of especially since your husband helped write it, but what was the one scene when it was all put together you were like, “we have nailed this movie.”

K. Kusama: For me it is the moment when he sort of freaks out at the dinner table.  The whole “Where’s Troy” scene, I just felt like it was really effective and moving and sad.