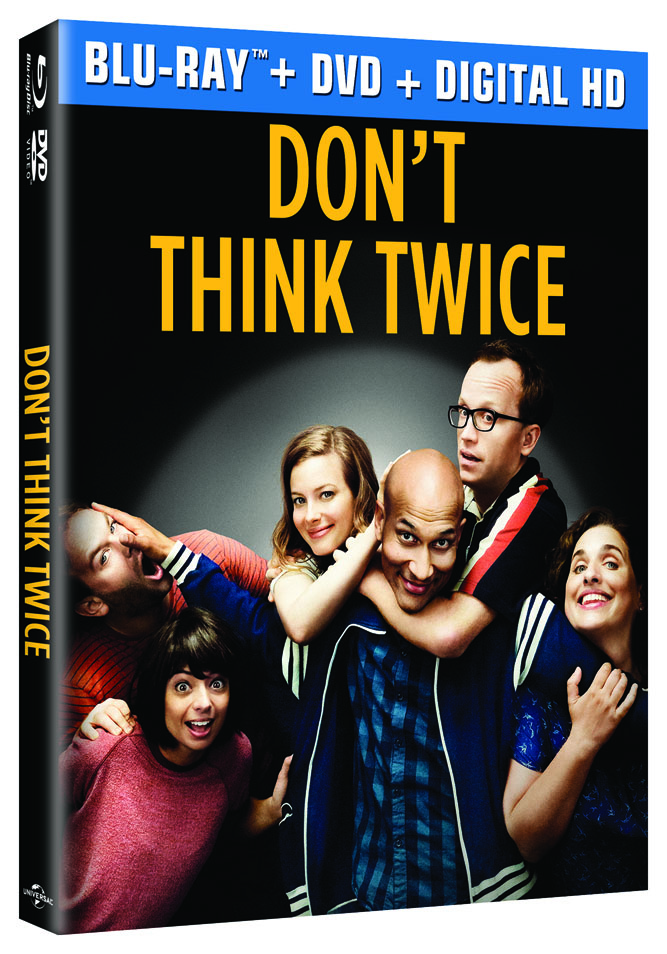 HNS received a copy of the DVD/Blu-ray for the film Don’t Think Twice in preparation for it’s release date. Check out our review of it below! A member of a popular New York City improv troupe catches their big break forcing the group to reevaluate their success and confront their fears in the hilariously honest film, Don’t Think Twice.  The bittersweet behind-the-scenes look into the lives of six best friend comedians comes to Digital HD on November 22, 2016 and Blu-ray™, DVD and On Demand on December 6, 2016 from Universal Pictures Home Entertainment.  Hailed by critics as “one of the best films of the year” (Michael Phillips, Chicago Tribune) and “this summer’s funniest movie” (Alan Scherstuhl, The Village Voice), Don’t Think Twice is “the perfect movie about the cost of chasing dreams” (Peter Hall, Fandango). The Blu-ray™ and DVD are packed with never before seen deleted footage and exclusive behind the scenes featuring the cast and filmmakers discussing the creative process of bringing this film to life.

From Mike Birbiglia, the director of Sleepwalk With Me, and Ira Glass, the creator of “This American Life”, comes this smart and hilarious comedy about the lives of professional funny people starring Keegan-Michael Key (“Key & Peele,”Keanu), Gillian Jacobs (“Girls,” “Community”), Mike Birbiglia (Sleepwalk with Me, Trainwreck), Kate Micucci (“The Big Bang Theory,” When in Rome), Chris Gethard (“Inside Amy Schumer,” “The Chris Gethard Show”) and Tami Sagher (“Broad City,” “Girls”). For 11 years, the six-person comedy team known as The Commune has killed it onstage while waiting for their big break.  Suddenly, the team finds itself at a crossroads when one of the members becomes a solo success and the rest of the group realizes they may not make it big after all.

BONUS FEATURES on BLU-RAY and DVD

First, I’d like to emphasize that the film itself is fantastic, and definitely deserves a look (or probably second look if you’re buying the DVD/ Blu-ray).

The DVD/Blu-ray/Digital HD combo pack includes two discs, each with the same material on them. I am always partial to the Blu-ray editions, because it gives a much clearer picture and the quality of the film is always better. What I like about the way they’ve packaged this, however, is that both the DVD and Blu-ray included have all the special features. A lot of times there’s special features that are only included on the Blu-ray, which is unfortunate to those who only possess a DVD player, so I’m a fan of including all features on both versions.

I really enjoyed the bonus features on the DVD/ Blu-ray, and I’ve outlined below a little bit about each one.

This feature showed a lot of small scenes that were likely cut due to time/ to keep the story flowing, but offers viewers a further glance into the ensemble improv sessions. This included tidbits from the characters backstage and on stage. I love watching the entire cast together; I think the movie is truly an ensemble piece, so I was really happy about seeing more of the ensemble improv in this feature.

This feature offered interviews with the whole cast (Writer/Director/Actor Mike Birbiglia, Keegan-Michael Key, Chris Gethard, Kate Micucci, Tami Sagher, Gillian Jacobs) and producer Miranda Bailey. Bailey spoke about how the film came to be and that she was a fan of Birbiglia’s previous work. Birbiglia spoke highly about films that influenced Don’t Think Twice and how studios don’t make big cast films centered around friendship anymore. That is what became his focus in the film.

The feature also doubled as a love fest for Birbiglia, and it was very apparent that the cast truly felt proud of this film and had only the highest praises for the writer/director. The film was low budget, and the actors spoke highly of the energy and passion on set to create the film. Birbiglia explains that this film is ultimately about how life can really go a way you didn’t expect, and how success is such a fickle thing, why some achieve success and others constantly struggle, how some people find fame and others don’t. But in the end all of the characters find happiness in their own way.

Don’t Think Twice: The Art of the Improv

In this feature the actors all spoke about the dynamics of improv and how the structure of the art form is. Birbiglia spoke about how he did a lot of improv in his career and also how he uses that in his filmmaking. I really liked how much appreciation for improv this feature outlined, and it gave me a better understanding of the structure of this one-of-a-kind art form.

This was my favorite feature. This feature outlined each member of the Commune and was composed of interviews with the cast. It became very clear that each actor had such a deep understanding of his or her character, and it was very interesting to hear each actor discuss what drove his or her character. Viewers who like to think deeply about character development would find this feature interesting.

Overall the features included on the DVD/Blu-ray offered a deeper look inside the story, characters and making of the film. It offers a little something for everyone and is definitely worth a look.