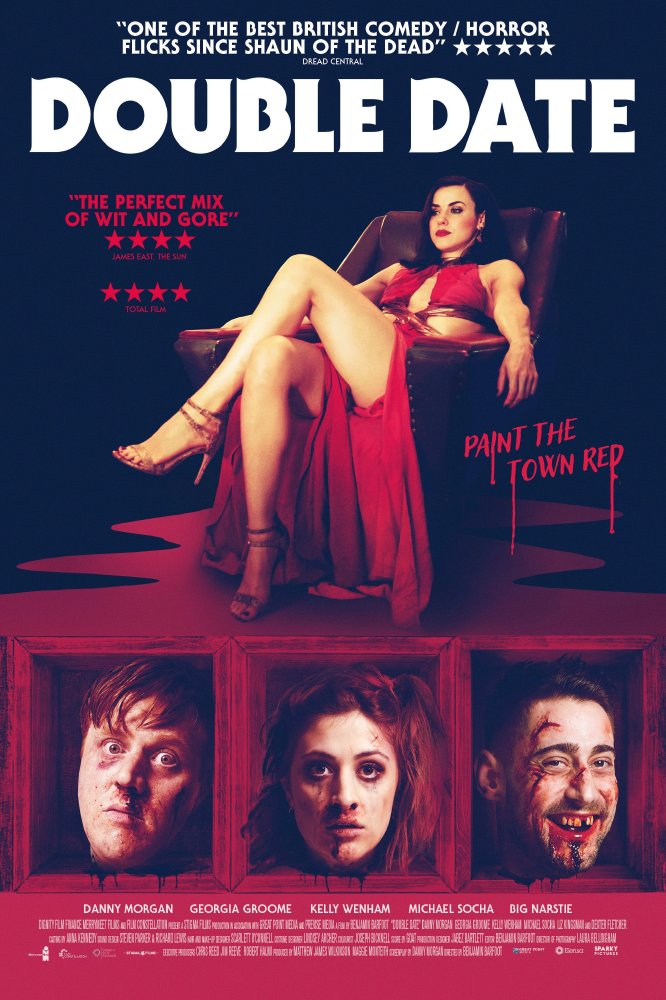 Read on for a selection of UK independent films you might not have heard about yet. He is aided by his best friend the highly confident, socially blunt but loyal Alex played by Michael Socha (Once Upon a Time) Morgan and Socha display natural comedic chemistry throughout. Alex wants to give Jim a good birthday night out by helping him move on after breaking up with his girlfriend and help him finally lose his virginity, this leads them to meeting and going on a date with the attractive and mysterious sisters Kitty (Kelly Wenham – Tales From The Lodge, Merlin) and Lulu (Georgia Groome – Angus, Thongs and Perfect Snogging).

The foursome decide to go out on a night out. What follows turns into the double date from hell, Alex and Jim get more than they bargained for on this night out as all mayhem ensues.

Some of the highlights are the animated intro of the film with a rocking soundtrack from Swedish alternative rock band GOAT, and a very amusing cameo from UK grime star and TV personality Big Narstie.

There is a fight scene between Kelly Wenham and Michael Socha which is one of the best fights on screen I have seen in a long time from either TV or movies. A combination of brutality, comedy, in which literally various objects and furniture are used, wonderfully choreographed to look organic and still further the narrative of the story.

Kelly Wenham (Kitty) puts in a wonderful performance showing off an aggressive, sociopath like tendencies metamorphosis at times, including the physical one she trained for months to be imposing and athletic as she was in the fight scenes. She bounces off nicely against the slightly more guilty conscience naivety of her sister (Lulu) Georgia Groome.

The wonderful cinematography by Laura Bellingham with its earthy and primary colour pallets adds to the film a throwback to late 1970’s and 80’s cinema, a definite fun/horror comedy to have a look at and not forgetting an entertaining cameo by Dexter Fletcher director of Oscar winning film about Queen (Bohemian Rhapsody). From Scotland comes this thriller written and directed by Matt Palmer, about two friends Vaughn played by Jack Lowden (Fighting with my family, Dunkirk) and Marcus played by Martin McCann (The Frankenstein Chronicles) who drive to the Scottish highland’s for a weekend break of hunting, nature to relax and get away from the fast life of the city.

They meet local girls Iona played by Kate Bracken (Being Human, Misfits) and Kara played by Kitty Lovett (Rillington Place) in this small town their first night out. What they encounter is an incident and tragedy the day after that will change their lives forever and everybody involved who meets them over this weekend away.

It will have them and you as the audience member questioning your moral compass and asking what would you do? With twists and turn which will challenge you as a human being and leave them wandering at what time is the cost too great to protect a secret and how far are you willing to go to survive this truth and nightmare? A good strong cast supports including veteran Scottish actor Tony Curran (Ray Donovan, Daredevil) as one of the senior resident/patriarchs of the town who try to investigate the truth behind these two strangers in their town. Set in the inner city of Belfast in Northern Ireland from director Abner Pastoll. This is the story of a newly widowed young mother Sarah (played by Irish actress Sarah Bolger) with young children to raise. She’s looking to find the truth behind her husband’s murder.

What Sarah discovers is some dark realities and truth about her own circumstances, family, her husband and the journey she goes through to find the courage to fight and question her own moral compass and how dark are we willing to go into our souls to protect those we love and from being a victim.

Bolger commands the screen with a powerful but subtle performance and keeps you glued to the screen as she encounters some of the most unsavoury characters you could imagine in the underworld, from sexual predators to enforcers to drug dealers. How much of a monster would you be willing to become to stop the worst monsters you could imagine? Does the end justify the means? Some of the questions Sarah has to battle through to defend herself and her family, and how far she is willing to pursue revenge and get justice.

Double Date is available on DVD and Amazon Prime.

A Good Woman is Hard to Find now available in UK & Ireland on Amazon, Apple, Google etc. Coming to US cinemas in 2020

Calibre is available to stream on Netflix