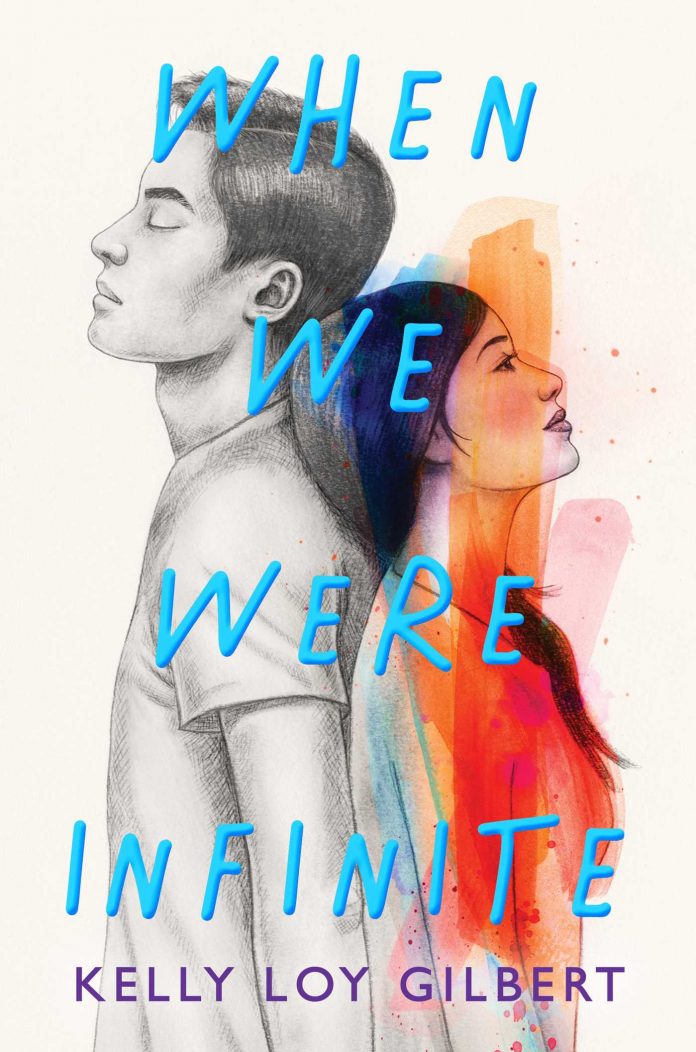 All Beth wants is for her tight-knit circle of friends — Grace Nakamura, Brandon Lin, Sunny Chen, and Jason Tsou — to stay together. With her family splintered and her future a question mark, these friends are all she has — even if she sometimes wonders if she truly fits in with them. Besides, she’s certain she’ll never be able to tell Jason how she really feels about him, so friendship will have to be enough.

Then Beth witnesses a private act of violence in Jason’s home, and the whole group is shaken. Beth and her friends make a pact to do whatever it takes to protect Jason, no matter the sacrifice. But when even their fierce loyalty isn’t enough to stop Jason from making a life-altering choice, Beth must decide how far she’s willing to go for him—and how much of herself she’s willing to give up.

For fans of The Perks of Being a Wallflower.

It’s safe to say that I spent the majority of my time dry heaving while reading When We Were Infinite. I should’ve expected Kelly Loy Gilbert will make me cry. This is in no way a fluffy book, and I caution readers to read the trigger warnings. This book covers a wide range of topics from (attempted) suicide, mental illness like anxiety, panic attacks, abuse, racism, mental health, and other microaggressions.

What readers could expect: the exploration of intergenerational trauma within Asian-American families, friendship, and identity. If you’re a romance reader like me and are expecting a cutesy side romance, this is not it. It’s not the focal focus of the story although, the tropes are friends to lovers, first love, and a little bit of second chance romance.

When We Were Infinite is a coming-of-age novel set in San Francisco. The story unravels when Brandon and Beth witnessed Jason’s father physically assaulting him. That single moment changed the dynamics of a tight-knit circle of friends. Beth Claire, Grace Nakamura, Brandon Lin, Sunny Chen, and Jason Tsou are the main characters of the story; the book is told from Beth’s point of view.

The five main characters are all East Asian-Americans and Gilbert incorporated different facets of Asian culture and experience into each character. No one has the same foundation as the other. It’s interesting that the parents of these teenagers are repeating the cycle of generational trauma. Someway, our young protagonists are burdened to break that cycle. This is why this book could be triggering for a lot of readers. There’s a manifestation of different types of trauma

The story is narrated by Beth, who’s the type of friend who rarely say much when she’s with the group. She’s happy to listen to her friends have fun and watch comfortably in the backseat. She’s the glue that tries to hold everyone together. After witnessing something catastrophic that happened to Jason – Beth tried every possible way to comfort him and make him feel normal again. That incident left a lasting effect on her. She started having panic attacks; she started keeping secrets between her friends; she’s fighting with her mom. She’s just angry, sad, and lonely. Who wouldn’t be able to relate to that?

The secondary character is Jason, he grew up in an abusive environment; his father physically assaults him. As a result, this affects Jason’s behavior – and how he interacts with his friends. The rest of the group does so much to make him feel normal again. Everyone’s refusal to acknowledge all the trauma that they went through created a fracture to their friendships. I wish adults could give them more credit. They’re a bunch of teenagers who are trying to move on from a distressing series of events within the best abilities that they have. Gilbert didn’t try to throw it under the rug, instead, she showed how the friends tackled the problem without the wall of façade. It’s a contemporary found-family trope.

The story mainly focuses on Beth and Jason. She always had a thing for him – that’s why she’s actively trying her best to somehow help him. Even though the romance isn’t the main arc of the story, it is certainly the foundation of Beth’s character. The relationship between Beth and Jason was cute. I like their history but it’s also not the healthiest relationship. It’s clouded by tension and toxicity. In the end, the author resolved this issue carefully. It was not romanticized, all the hurt and harmful behaviors were acknowledged. As I said, this is not a romance novel, even though I wish there’s more to that!

When We Were Infinite made me feel nostalgic. Beth’s yearning of wanting to belong in a place, to be tethered to someone or multiple people, to feel that someone cares about you – that self-consuming anger – it’s all heavily packed in this one short book.

It is definitely joining my favorite-book list and this-shit-made-me-sob-my-heart-out list. That’s the reason I don’t think I could reread it anytime soon, it’s too realistic and heartbreaking at the same time.

Overall, I love the ending and how it gives everyone a snapshot of the future. I wish more YA books will feature an epilogue. When We Were Infinite is a phenomenal YA novel. This book delicately explores intergenerational trauma, friendship, and identity.