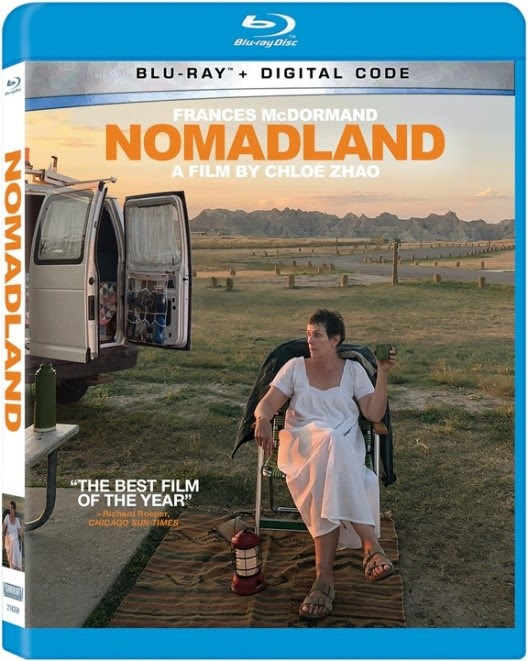 The Oscars are gearing up this coming weekend, and we were lucky enough to score a blu-ray of frontrunner “Nomadland” to review. Check out our review and details on where to grab your copy below.

Searchlight Pictures and Chloé Zhao’s “Nomadland,” an exploration of modern-day van dwelling life on the road starring Frances McDormand, will be available on digital April 13 and Blu-ray™ April 27.

Here’s the official synopsis and specs of what you can expect from this product:

Synopsis: Following the economic collapse of a town in rural Nevada, Fern (Frances McDormand) packs her van and explores an unconventional life in the vast landscape of the American West. Along the way, she forms unbreakable bonds with other nomads in this powerfully moving story of hope and resilience from director Chloé Zhao, based on the book by Jessica Bruder, also starring David Strathairn.

*bonus features may vary by retailer and product

Review: The film is a very quiet, introspective look on one woman’s journey who goes against the grain. It’s a look at what life could look like to someone who rejects societal norms and instead chooses to live a minimalist life, while dealing with her own internal struggles. There is a calmness to the film that isn’t often seen anymore, but still has you feeling intense emotions by it’s conclusion. The cinematography was absolutely gorgeous and it really showcases just how beautiful America is, if you just take the time to go seek it.

The blu-ray also comes with a digital code (YESSS) which is always at the top of my wish list in a DVD or Blu-ray, along with quality special features. I was excited to see the special features, and they did not disappoint. It should be noted that there may be variations here with different releases, but for my copy it had 3 special features, as seen above. Let’s break them down:

Special feature #1: “The Forgotten America”We learn here that it was Frances who reached out to Chloe Zhao regarding the book. We get a look at the real life inspirations behind the book, and ultimately film. We see some behind the scenes video, some photo stills, some real life “nomads,” and some snippets from the film. We learn that Frances also lost her father and she brought that to her performance while sweetly showing the camera a photo of him. We get interviews from Chloe Zhao, Author Jessica Bruder, Producer Peter Spears, Frances McDormand, Bob Wells, Linda May, Swankie, and Director of Photography Joshua James Richards. This feature has a runtime of 13:35.

Special feature #2: “Telluride Q&A With Frances McDormand and Chloe Zhao”This special feature has a runtime of 14:48 and shows a post screening Q&A with the filmmakers and cast at the Telluride Film Festival. This took place as a “Drive-In premiere” on September 11,2020 at the Rose Bowl Stadium in Pasadena. It was really cute to see all the cars honking and flashing their headlights as they brought out all the filmmakers and cast. I loved that they brought out the real nomads as well. They followed COVID protocols. We learn a lot of cool information from this, and my favorite tidbit was that Frances herself has a dream of living the nomad lifestyle, and previously told her husband of her plans to do so.

Special feature #3: “Deleted Scenes”There are 2 deleted scenes on the blu-ray titled “Lunch Interrupted” and “A Gift From God” with a runtime total of 2:54. The first scene shows Fern eating peacefully in her van when police show up and run her information when they supposedly received a complaint from residents in the area regarding a woman sleeping in her van. It really shows just how much of an overreaction society has on peaceful nomads literally doing nothing wrong. This scene was really thought provoking, and I’m actually bummed it wasn’t included in the film. I feel maybe it was cut due to political reasons, and maybe not trying to distract from the main theme of the film. The second scene shows Fern in a school bus with another nomad telling a story. The story was a little hard to follow, so I can ultimately understand why it was cut, but it was still interesting to see here as a deleted scene.

You can grab your Blu-ray or DVD copy of “Nomadland” beginning April 27th. It is currently also available via on demand across multiple platforms and streaming on Hulu.