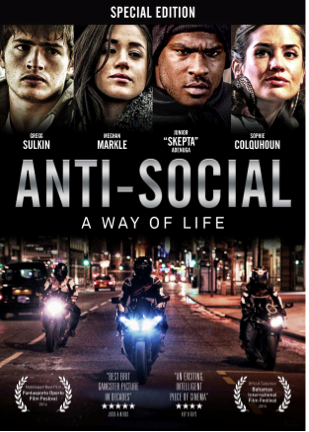 Check out our film review of Anti-Social:Special Edition starring Gregg Sulkin and Meghan Markle released on January 2 on all major digital and cable VOD platforms! “Anti-Social: Special Edition” is a fictional story inspired by three highly publicized real-life crimes in London; the Graff Diamonds robbery in 2009, the Selfridges Burka robbery in 2013, and the Brent-Cross smash and grab robbery in 2012, with original music by Drew McConnell and Adam Faulkner (Babyshambles), Itch (The King Blues), and Shara Nelson (Massive Attack).

Central London: As graffiti-artist Dee (Gregg Sulkin) and fashion-model Kirsten  (Meghan Markle) embark on a whirlwind romance, his brother, Smash-and-Grab diamond thief Marcus (Josh Myers), rides high as an underworld ‘face’ on a wave of dare-devil armed-robberies. But while Dee finds a new way of life with Kirsten away from the grit of the street, Marcus makes a move into the lucrative London drugs-rackets and ignites a gangland war resulting in multiple murder and ultra-violence. Ruthlessly hunted by rival criminal Leon (Skepta), Marcus turns to his underworld mentor for help and is offered the biggest score of his life – a high risk West End heist which will bring Dee and Kirsten’s world crashing down…

What interested me the most about this film was the portrayal of actual events that took place in London. I had never heard of these incidents, so it was intriguing to ‘witness’ these events on the screen.

This movie is violent, sexually graphic and contains swearing. I would recommend this for a more mature audience. Some of the scenes were disturbing to watch, and I had to look away a couple of times. Though, it was an action packed movie, so it kept me on the edge of my seat. I didn’t know what to expect throughout the whole movie.

The cast blended really well together. Markle and Sulkin were a great pair to watch onscreen. I am not familiar with any of Markle’s work, but she impressed me in this film. As did Sulkin. The rest of the cast also played out their roles in a way that made it seem like everything that was happening was actually happening.

My only complaint with this film was it was a bit confusing if you looked away for a couple of seconds. Sometimes there was so much going on in a scene that it was hard to follow. It’s not a big problem, but I just recommend paying attention or you may get lost.

Overall, this was a solid film. Minor spoiler, but it was a happy ending for the two main characters. Fans of action and crime would definitely be interested in this film as it is centered around a series of armed robberies.

The movie is now available on all major digital and cable VOD platforms as of January 2, 2017!