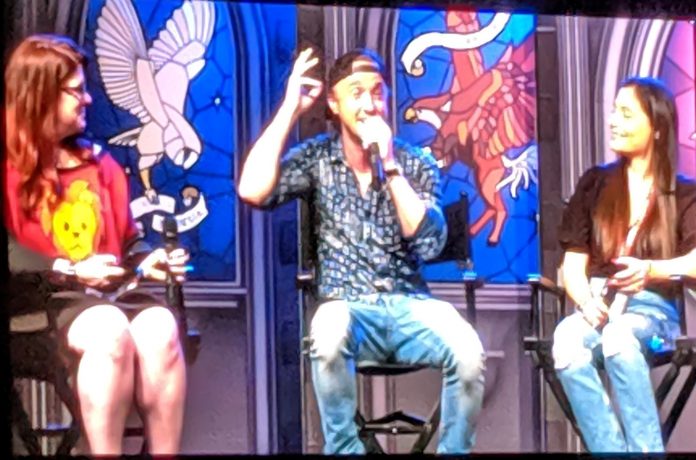 We went to LeakyCon earlier this month in Dallas to bring fans the scoop on the world’s largest unofficial Harry Potter convention! …and it’s bloody brilliant! Friday night’s LeakyCon entertainment featured a concert with four “Wrock” bands. Lauren Fairweather kicked off the show with fan favorites like “It’s Real for Us” and “Hufflepuff”. Draco and the Malfoys, Tonks and the Aurors, and Harry and the Potters rounded out the lineup, performing original tunes inspired by the story of The Chosen One.

And speaking of magical melodies…

Apparently so! The actor who portrayed Draco Malfoy, everyone’s favorite bad boy of Hogwarts, played a set of his original songs for fans on Saturday night.

Tom also revealed that when he’s not playing his guitar he likes to hang out with his new dog – a sweet silver Labrador! And, when asked if he’s a bigger believer in Drarry or Dramione – he admitted he favors the latter. In between magical performances, we had plenty of opportunities to discuss controversial book topics. Panels led by long-time fans of the series were a hit with attendees – who relished the chance to FINALLY speak up about every character from Snape (bully or misunderstood hero?) to Dumbledore (genius or seriously problematic caregiver?).

4: Fan theories are alive and well. (And some of the “headcanon” is delightful.)

If you’ve scoured the internet for Harry Potter fanfiction you may already know about some of the most popular theories – like Draco Malfoy being a werewolf or Lupin and Sirius being the most precious couple EVER. But what about the #WizardTeam podcast hosts’ theory about Hedwig really being Beyoncé? Or (a personal new favorite) the one about adult Mandrakes only singing Drake?

5: Potter fans still love YA authors who don’t shy away from tough topics.

While you won’t find J.K. Rowling among the LeakyCon guests, we did find several great YA authors who are writing about the issues facing young readers. Julie Murphy (Dumplin’, Puddin’) and Angie Thomas (The Hate U Give, On the Come Up) were just a few of the notable authors we spotted signing autographs for fans and participating in panels throughout the weekend.

And can you really blame us for getting in on the action? Lots of fans bring ribbons or homemade trinkets to share, so we took along a few hundred ribbons of our own to exchange! And we left with more goodies than you could shake a Bowtruckle at. (Though we know better than to do that to poor Pickett!)

But what will other LeakyCon guests say if you don’t bring something to trade? No problem! Potter fans are a generous group. Said fan Ericka Mathis, “I would rather be first year Harry sharing his trolly stash with his new friend Ron, corned beef sandwich forgotten.”

7: You can’t have LeakyCon without LeakyCosplay.

There were two different cosplay contests during the weekend – for younger players and those over 16. Some of the fan favorites included Purr-mione and Yule Ball Hermione and Ron. But even those fans who don’t cosplay tend to show up with wands and ties to support their favorite Hogwarts house!

8: Social justice is just part of the Potter culture.

It’s no question that social justice is at the heart of the HP series. But it is also at the heart of the fandom. In fact, a whole section of the weekend’s schedule was called “Constant Vigilance” – to be sure fans could easily locate the panels about social issues and underrepresented communities of the wizarding world. But even beyond the panels, LeakyCon is a welcoming place for all fans to come together and share their love of Potter!

(And it did.) Seriously – rows and rows of vendors selling nothing but Harry-inspired artwork, clothing, jewelry, housewares, and more? We needed Newt Scamander’s suitcase just to get all our awesome con loot home!

Also – the LeakyCon marketplace has sandwiches that you can catch in your mouth! They’re called Snitchwitches… 9 ¾: Some fans are still brought to tears by the story of the Boy Who Lived.

Okay… this isn’t really news and also we were the ones crying… But come on! Where else do you get to sit in a room with other people who love the Weasly family as much as you do and talk about how Molly… *sniff* gave Harry… *sniff* his first-ever Christmas present? *blows nose*

LeakyCon 9 ¾ in Dallas definitely did not disappoint! But if you missed it – don’t worry! The magic continues at LeakyCon 10 in Boston this October! Or plan ahead for 2020 and grab your tickets Friday, August 23rd for LeakyCon 11 in Orlando!