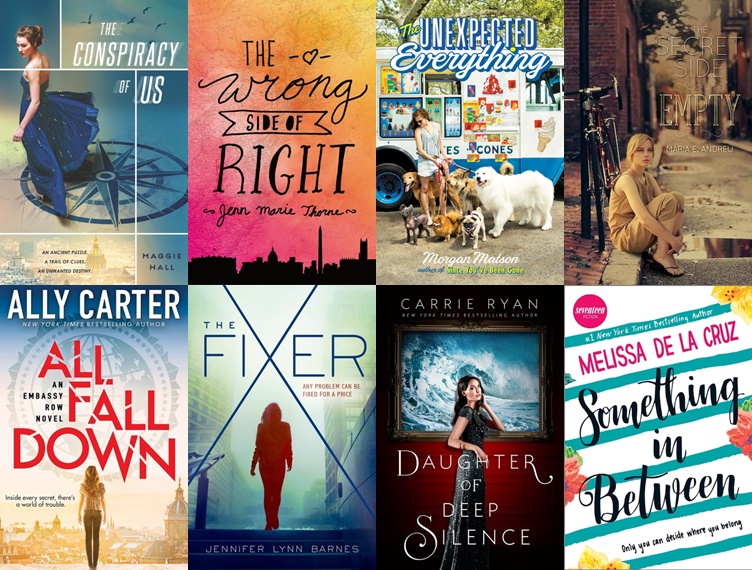 It’s relatively easy to get lost in the politics section of YA. This genre is slowly growing. The books are very few, but they exist. I fell in love with the fancy international escapades, conspiracies that expand from the United States across the globe, the White house drama, seeing the daughters and the sons of prominent politician navigate their almost adult life, and more.

However, as I curate this list I noticed the lack of variety and the hefty amount of privilege. These characters are mostly white, cishet, able-bodied that came from affluent, notable family. This is beyond disappointing. It might not be intentional, but it erases the voices and faces of Native Americans, people of color, immigrants, and other marginalized groups who are often ostracized by our government and its laws.

A special shout-out to The Land of Forgotten Girls by Erin Entrada Kelly. A Middle Grade book, about two sisters from the Philippines, navigating their poverty stricken life with the help of magical stories. Melissa de la Cruz’s upcoming book, Something in Between follows the story of Jasmine de la Santos, a higher achiever senior student who recently discovered she and her family are undocumented. This threatens her chance for a full ride scholarship.

In honor of Fourth of July, I want to remind everyone that the true essence of being an American comes from different shades of color, bodies- it extends to every person you don’t usually see in mainstream media. The Fixer by Jennifer Lynn Barnes

This thriller YA is Scandal meets Veronica Mars.

Sixteen-year-old Tess Kendrick has spent her entire life on her grandfather’s ranch. But when her estranged sister Ivy uproots her to D.C., Tess is thrown into a world that revolves around politics and power. She also starts at Hardwicke Academy, the D.C. school for the children of the rich and powerful, where she unwittingly becomes a fixer for the high school set, fixing teens’ problems the way her sister fixes their parents’ problems.

And when a conspiracy surfaces that involves the family member of one of Tess’s classmates, love triangles and unbelievable family secrets come to light and life gets even more interesting—and complicated—for Tess. The Wrong Side of Right by Jenn Marie Thorne

Kate Quinn’s mom died last year, leaving Kate parentless and reeling. So when the unexpected shows up in her living room, Kate must confront another reality she never thought possible—or thought of at all. Kate does have a father. He’s a powerful politician. And he’s running for U.S. President. Suddenly, Kate’s moving in with a family she never knew she had, joining a campaign in support of a man she hardly knows, and falling for a rebellious boy who may not have the purest motives. This is Kate’s new life. But who is Kate? When what she truly believes flies in the face of the campaign’s talking points, she must decide. Does she turn to the family she barely knows, the boy she knows but doesn’t necessarily trust, or face a third, even scarier option? All Fall Down by Ally Carter

1. She is not crazy.
2. Her mother was murdered.
3. Someday she is going to find the killer and make him pay.

As certain as Grace is about these facts, nobody else believes her — so there’s no one she can completely trust. Not her grandfather, a powerful ambassador. Not her new friends, who all live on Embassy Row. Not Alexei, the Russian boy next door, who is keeping his eye on Grace for reasons she neither likes nor understands.

Everybody wants Grace to put on a pretty dress and a pretty smile, blocking out all her unpretty thoughts. But they can’t control Grace — no more than Grace can control what she knows or what she needs to do. Her past has come back to hunt her . . . and if she doesn’t stop it, Grace isn’t the only one who will get hurt. Because on Embassy Row, the countries of the world stand like dominoes, and one wrong move can make them all fall down. The Unexpected Everything by Morgan Matson

Andie had it all planned out.

When you are a politician’s daughter who’s pretty much raised yourself, you learn everything can be planned or spun, or both. Especially your future.

Guys? Check (as long as we’re talking no more than three weeks).

But that was before the scandal. Before having to be in the same house with her dad. Before walking an insane number of dogs. That was before Clark and those few months that might change her whole life.

Because here’s the thing—if everything’s planned out, you can never find the unexpected.

And where’s the fun in that? The Secret Side of Empty by Maria E. Andreu

As a straight-A student with a budding romance and loyal best friend, M.T.’s life seems as apple-pie American as her blondish hair and pale skin. But M.T. hides two facts to the contrary: her full name of Monserrat Thalia and her status as an undocumented immigrant.

But it’s harder to hide now that M.T.’s a senior. Her school’s National Honor Society wants her to plan their trip abroad, her best friend won’t stop bugging her to get her driver’s license, and all everyone talks about is where they want to go to college. M.T. is pretty sure she can’t go to college, and with high school ending and her family life unraveling, she’s staring down a future that just seems empty. In the end, M.T. will need to trust herself and others to stake a claim in the life that she wants.

Author Maria E. Andreu draws from her personal experience as a (formerly) undocumented immigrant to explore an issue that affects over one million children in the U.S. But while the subject matter is timely, it is M.T.’s sharp, darkly funny voice and longing for a future that makes this story universally poignant. I’m the daughter of murdered parents.
I’m the friend of a dead girl.
I’m the lover of my enemy.
And I will have my revenge.

In the wake of the devastating destruction of the luxury yacht Persephone, just three souls remain to tell its story—and two of them are lying. Only Frances Mace knows the terrifying truth, and she’ll stop at nothing to avenge the murders of everyone she held dear. Even if it means taking down the boy she loves and possibly losing herself in the process.

Sharp and incisive, Daughter of Deep Silence by bestselling author Carrie Ryan is a deliciously smart revenge thriller that examines perceptions of identity, love, and the lengths to which one girl is willing to go when she thinks she has nothing to lose. The Conspiracy of Us by Maggie Hall

Avery West’s newfound family can shut down Prada when they want to shop in peace, and can just as easily order a bombing when they want to start a war. Part of a powerful and dangerous secret society called the Circle, they believe Avery is the key to an ancient prophecy. Some want to use her as a pawn. Some want her dead.

To unravel the mystery putting her life in danger, Avery must follow a trail of clues from the monuments of Paris to the back alleys of Istanbul with two boys who work for the Circle—beautiful, volatile Stellan and mysterious, magnetic Jack. But as the clues expose a stunning conspiracy that might plunge the world into World War 3, she discovers that both boys are hiding secrets of their own. Now she will have to choose not only between freedom and family–but between the boy who might help her save the world, and the one she’s falling in love with. It feels like there’s no ground beneath me, like everything I’ve ever done has been a lie. Like I’m breaking apart, shattering. Who am I? Where do I belong?

Jasmine de los Santos has always done what’s expected of her. Pretty and popular, she’s studied hard, made her Filipino immigrant parents proud and is ready to reap the rewards in the form of a full college scholarship.

And then everything shatters. A national scholar award invitation compels her parents to reveal the truth: their visas expired years ago. Her entire family is illegal. That means no scholarships, maybe no college at all and the very real threat of deportation.

For the first time, Jasmine rebels, trying all those teen things she never had time for in the past. Even as she’s trying to make sense of her new world, it’s turned upside down by Royce Blakely, the charming son of a high-ranking congressman. Jasmine no longer has any idea where—or if—she fits into the American Dream. All she knows is that she’s not giving up. Because when the rules you lived by no longer apply, the only thing to do is make up your own.