We got invited to an advanced screening of zombie comedy ‘The Dead Don’t Die.’ Check out our film review below! 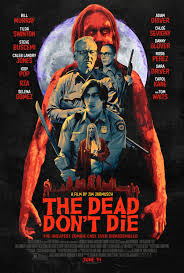 The Greatest Zombie Cast Ever Disassembled

Written and Directed by

In the sleepy small town of Centerville, something is not quite right. The moon hangs large and low in the sky, the hours of daylight are becoming unpredictable, and animals are beginning to exhibit unusual behaviors. No one quite knows why. News reports are scary and scientists are concerned. But no one foresees the strangest and most dangerous repercussion that will soon start plaguing Centerville: The Dead Don’t Die — they rise from their graves and savagely attack and feast on the living, and the citizens of the town must battle for their survival.

Adam Driver and Bill Murray lead the audience down a hilarious ride in The Dead Don’t Die. The film is intriguing from the start and keeps you guessing what will happen next. The unpredictability keeps this film fun and light and with the humor intermixed to create a film you wouldn’t quite expect. Each character in the film reacted to the impeding zombie apocalypse in a unique way, and watching all of these reactions unfold was extremely entertaining.

The film is a particular type of dark comedy, but its comedy is spot on. It’s reminiscent of the comedic style of ‘This is the End.’ There’s a sarcastic undertone and lots of hilarious references in the most unexpected moments. This often catches the audience off guard, which just made the humor that much more effective. The comedy in the film might come off divisive among audiences, as it’s not a comedy that’s intended for everyone. But I am a fan of this particular style, and I can definitely embrace this cinematic experience.

Don’t go into the film thinking you’re going to get a horror film. There are certainly horror elements, but this is not at the forefront. There’s nods to politics, climate change, media, and pop culture. But it’s all done in a way that just adds to the comedy, and is not offensive or preachy. The film doesn’t take itself seriously, and it’s best to go into it with this same approach, and just enjoy the movie for its great acting, funny tone, and unpredictability. I highly recommend you go see the film, and have FUN with it! Go for the laughs and the shock value and you’ll enjoy it just as much as I did.