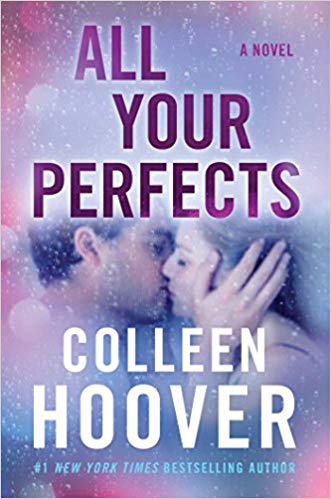 Colleen Hoover was my go-to author when I was in high school. Over the course of my college years, reading kind of dwindled from my life. However, I am back on my reading kick, and this was the second book I read since. I read this book in two days. TWO DAYS, which is a big deal to me since I’ve been out of my reading game. Hoover always just enchants me with her words — she hooks me every time. “Ugly Love” was one of my favoritist (that’s not a word, but I’m just stating my utmost love for it) books. “All Your Perfects” was no different to any of her other novels. I still cried; I still fell in love; I still thought about it after I finished it. This book had a very heavy but real issue, and I think Hoover did it justice. The main characters, Quinn and Graham, are married and struggling with fertility issues. It wasn’t a lighthearted novel, but it was a book that left you smiling at the end.

Graham and Quinn…both two broken souls. When we first met Graham and Quinn in the beginning, I was waiting for the moment they would get together. Quinn’s fiance was sleeping with Graham’s girlfriend, so it wasn’t the most conventional meeting between the two. However, I think that’s what made their meeting so unique. Sure, it was a sucky situation, but the end result was better.

Graham was like the book boyfriend that you dream about being your boyfriend. He was smart, witty and lovable. He truly cared about Quinn, and he was so passionate about her. I loved, loved, loved his little quirk of asking Quinn what he missed while they were asleep. It was so cute and made my heart swell. Underneath the perfectness of him, he wasn’t. Just like every other human in this world, Graham was not written as a cookie cutter dude. He had flaws, and he made mistakes with Quinn. Like big mistakes that, frankly, I am still not completely over. Despite this, Graham had a good character structure, and I just liked his goofiness.

Quinn was so real. She had her struggles and she understood she did. She didn’t try to brush off her depression of not being able to get pregnant. Sure, she didn’t openly communicate with Graham, but that’s because she was struggling. I felt for Quinn throughout the book. She was hurting, and I felt her hurt. I was waiting for that moment when Quinn got a moment of happiness that she deserved. I also liked how in the beginning, she was a bit of a dork herself. Also, she didn’t let her family’s wealth define who she is — she fought for her own successes, even if they didn’t result in abundant wealth.

In flashbacks, the romance between Graham and Quinn was really sweet. They had a quick relationship, but it didn’t give me those insta-love vibes that I usually get in whirlwind romances in books. I think their whirlwind romance worked for who they are as characters. I couldn’t have seen their progression go any other way.

In present-day moments, their romance was dwindling, each character losing hope in one another. With Quinn struggling to get pregnant, she expresses their intimate moments as being a means to an end. In fact, Quinn’s narration explains that Graham and her’s sex life had become almost clinical. The present-day moments where more somber, but it represented a couple’s struggle and didn’t try to downplay it and make it all better right away. We saw Graham and Quinn struggle. We saw their romance crumble when Quinn questions Graham about the affair he was having. I about threw my tablet across the room when I read that Graham had kissed another woman because Quinn was pulling away from him. I trusted you, man, and you blew it. However, he made it better towards the end of the book, for which I was grateful.

The ending was so satisfying! I was honestly so afraid that Graham and Quinn would call it quits on the marriage. I was really rooting for them. Through all their downfalls and heartache, they were able to come back together. After Quinn had a miscarriage and had to undergo surgery for a hysterectomy (my heart broke for them omg), their marriage fell apart. She ran off to her sister’s in Italy, but after a couple weeks, Graham decided it was time to let Quinn decide the fate of their marriage. He brought along a wooden box that sat love letters they wrote to one another — the love letters that only were to be open after 25 years of marriage or an emergency. After Quinn reads the letters from Graham, him professing his undying love for her and saying she will be enough for him forever, she realized that she needs him as much as he needs her. Quinn knows she could never live without Graham — through all their imperfections and all. Coming to the terms that Quinn will never have a child, they adopt a puppy together, which in some ways, was perfect. I was heartbroken for them that they would never be parents, but them adopting a puppy eased the pain a little.

Overall, if you want to cry, this is the book for you. I was trying so hard to suppress my tears during my work breaks. Hoover has a way with words that make you turn page after page. As I said, I read this book in two days, so it’s definitely a page-turner. Just be prepared to tear up a bit, and you might want to have some ice cream at the ready.