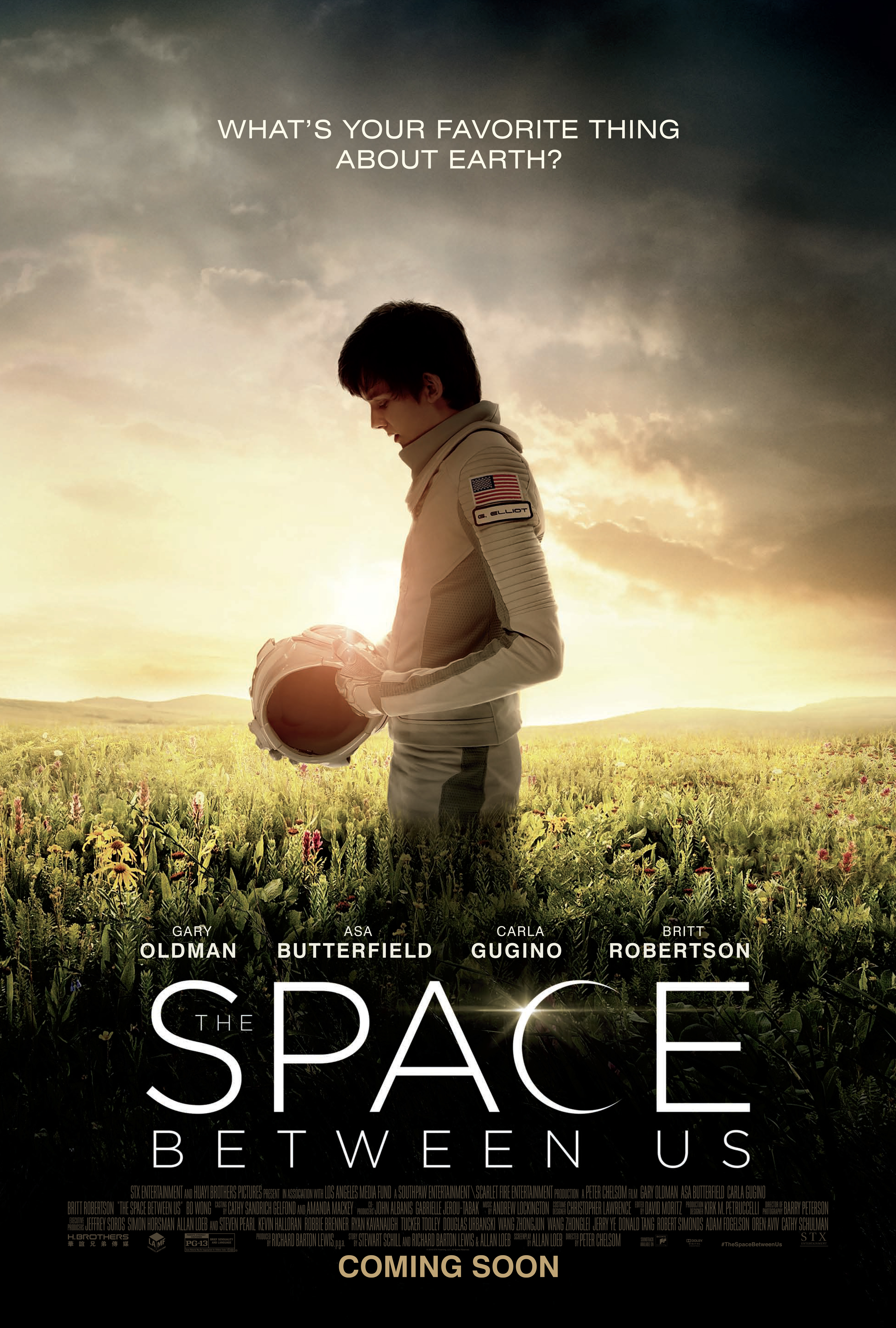 The Space Between Us is next month’s exciting new film release starring Asa Butterfield and Britt Robertson, and back when filming took place, Hollywood News Source got invited along to visit the set of this compelling film. FINALLY we get to reveal what we learned! The Space Between Us is a story about loss, self-discovery, isolation and most importantly the power of human connection. What makes this film so unique is the circumstances of the story, the situations that these characters have been thrown into, without any fault of their own. Having grown up on Mars, Gardner (Asa Butterfield) has so little idea of the world, of what normal human interaction is, of just being a normal teenager. It’s heartbreaking to watch him desperately try to be normal and live a regular life, even if it literally is killing him. Director Peter Chelsom described the themes of the story with us, and described it best when he said, “It’s a film about separation and connection amplified by the vastness of space.” I don’t think there’s a better sentence to describe this story. The creators went above and beyond to develop a story that was realistic and believable within the scope of the characters. It was important to them that they got the science as accurate as could be predicted in these potential scenarios. After describing the whole scenario to his contact at NASA, Producer Richard Lewis was met with a long pause and they said, “Have you been reading our emails?!” In other words, the fear of an astronaut getting pregnant while in space has crossed NASA’s mind many times.

They also got to visit Space-X and even met the famous Elon Musk. Chelsom described his experience there, “You look at what Elon Musk did – he went to those heroes of his that walked on the moon, in all his history, and they all doubted him – they all said his safety measures were not enough, they completely poo-poo’d him. If you see him in an interview, he becomes teary talking about it. You go to Space-X and you realize it’s very real, and then when you leave the building, you see Mars as it is, and you see Mars terraformed – because he believes it’s going to take 80 years, but he will create an atmosphere and it will start to become habitable. That’s his plan. It’s incredibly real… when you leave the building, you’re kind of overwhelmed by the power of one man’s conviction.” This actually inspired a line he wrote for Gary Oldman’s character when he talks about his visions as a 12 year old.

The creators had actor Asa Butterfield in mind for Gardner for a very long time. Lewis had seen Butterfield in Hugo, Cabaret, and The Boy in the Striped Pajamas and thought he would be fantastic for the character. Originally in the script, the character was 13, but as films in development take a while to come to fruition, Butterfield got older and so they developed the story around his age and made the character older. “What’s been terrific, he’s been in my eye since really the conceive of the story and it’s fantastic. He’s got an otherworldly quality, you’ll see when you talk to him, otherworldly quality, he’s so disarming and so charming and that’s great,” explained Lewis. “His logic is kind of – it’s not Spock-like, it’s that he has this kind of purity to him. He’s had not much human connection or interaction,” echoed Chelsom about the character.

When asked what was important for him to bring to the character of Gardner, Butterfield answered, “His naivety and his innocence about his view of the world and what he expects it to be, and then how different it is to what he envisioned. I think that’s what’s really important to come across. And in that, I think he can be quite strange – in his mannerisms, in the way that he talks to people, that he experiences things, that he reacts to things. So I think there’s a lot of fun to have with that.”

When we visited the set and chatted with Butterfield, I could instantly see what Lewis was describing in Asa. He has piercing light blue eyes and dark hair, and instantly you feel the otherworldly quality that Lewis had described. This of course presents itself beautifully to the character of Gardner. Gardner is so endearing, described by Britt Robertson as having “no harmful bone in his body.” This makes audiences root for him and makes him very likable on screen. “I think people will have a very fond attachment to him because he’s very childlike and unknowledgeable in the world,” Butterfield explained. The character of Tulsa, played by Britt Robertson, is vastly different than Gardner but they find a common bond. Though their situations are completely different, Tulsa experiences the same profound feelings of isolation. Lewis described Tulsa and Robertson’s portrayal of her, “She’s a foster child – probably been ignored, passed from home to home and doesn’t trust anybody. And Britt Robertson is just fantastic as this character. She’s just really brought it to life. She’s this very tough, feisty young woman. And he’s [Gardner] just going to be stunned by it, because he has no socialization.”

To achieve all of the qualities of this vibrant character, Britt had to do a lot of homework. “Britt is a fantastic example. She couldn’t ride a motorbike. She couldn’t play the piano. She tells me she couldn’t sing. She’s learnt to do all these things. It’s incredible,” Chelsom said of Britt’s dedication to all of the prep work she was given prior to filming. On her end, it didn’t seem like she minded it at all. “This role of Tulsa gives me a lot of opportunity to do weird things and fun things and just be spontaneous and kind of bring moments to life, and I don’t get a lot of opportunity to do that,” said Robertson.

When asked what was important for her to bring to the character of Tulsa, Robertson said, “I think it’s really important that she’s tough and defensive, and that she has this real exterior that’s actually very different to who she is on the inside. I think in contrast to that, it’s very important that she be vulnerable in moments as well, to make sense of why she’s so tough. So to find that balance.” In just the few scenes we got to watch being filmed, I can confirm that she manages to do exactly that.

When we arrived on set, it was day 31 of 37, and production was in full swing. At a public high school in Albuquerque, New Mexico, the film’s leads – Asa Butterfield and Britt Robertson – were filming a couple different scenes, and we got to sit in on all the action. Unfortunately, no other actors were present that day as the scenes did not call for their characters. The first scene we got to see featured Tulsa confronting a group of bullies, breaking their iPad and jetting off on a motorcycle like a complete badass. They filmed this scene multiple times and with a few different variations, and often spoke with the guys playing the bullies in gaging their reaction to Tulsa’s actions. Robertson struggled a bit with the motorcycle at times, but overall it went pretty smoothly. There was also –what I assume was – a stunt double who would drive the motorcycle back between takes and is the one who drove the far stretch of sidewalk. In the final version of the film, a lot of this scene got cut and you don’t see as much as we got to see there that day on set. I’m really hoping to see it as a deleted scene in the DVD when it comes out.

The second scene we watched was the first time Gardner meets Tulsa in the hallway of the high school, where he is not exactly met with the reaction he was expecting from an enraged Tulsa. Chelsom described the context behind the scene to us as we watched from the monitors on the sidelines, “He’s [Gardner] gone through a lot to get here, to say the least. He escaped from quarantine at NASA, got beaten up, had his money taken from him… He’s having a real struggle acclimatizing to earth’s gravity, because Mars is 38%.” He continues, “The problem is that she [Tulsa] didn’t know the journey was going to take him about 8 months. He said he was leaving New York and he was gonna see her shortly – he forgot to say that it was gonna take about 8 months because he’s coming from Mars.” This obviously sets the stage for a dramatic – and comical – encounter between the two that we got to witness.

Just a regular school day for the students, the overall energy from the set was palpable, with several students fascinated by the filmmaking process and stopping to watch from afar. Aside from their reactions to the large cameras and big scene setups, I would’ve had no clue how to decipher between regular student and background actor walking around. We asked if filming at a high school with class in session would make things challenging, but Chelsom is quick to point out that compared to other challenges, this is an easy film environment. Achieving a look of zero gravity, using harnesses and wires, big explosions, and ensuring no one is standing next to helicopter blades… those were the challenging bits. The Space Between Us is truly a movie that has something for everyone. Unique story that’s never been done before? Check. Rich characters? Check. Action and adventure? Check. Romance? Check. The list goes on. To get to be involved from the start was very rewarding, and I’m so excited for audiences to finally be able to see the film!

The Space Between Us hits theaters February 3, 2017. Be sure to grab your tickets now! And in the meantime, CLICK HERE to check out our exclusive Skype interview with Asa Butterfield.