This article recaps the first three episodes of The Handmaid’s Tale – Season 3. If you don’t want to know what happens next in Gilead, stop here! 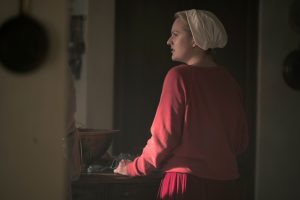 Season three begins right where season two left off. June stands watching as a truck carries baby Nichole away with Emily. In her narration of the story (which we understand is for the benefit of her daughter Hannah), June gives a short explanation of why she has refused to join them. “Mom’s got work.” (And obviously, the main character can’t be rescued just yet.)

Commander Lawrence reappears on the scene. He’s confused and annoyed that she has chosen not to join Emily and the baby in escaping to Canada. He says he’ll drive her to the border himself. June explains that if he helps her get Hannah back from Commander Mackenzie she will go with him. And she reminds him that this is all dangerous for him, too. He could be hung on the wall – even as a Commander. It’s uncertain whether he perceives this a threat or a warning. He agrees to take her to find her daughter.

When they arrive at Commander Mackenzie’s house, June asks the Martha where Hannah (also known as Agnus) is. Commander Lawrence is parked outside (though it’s unclear how long he stays there). Soon after June enters the house, guardians arrive outside. June speaks sweetly to her sleeping child before surrendering herself for arrest. But Mrs. Mackenzie insists on speaking with June before the guardians take her away. She wants her to know that Agnus is happy, and asks June to stop attempting to meet with her – the last meeting was too upsetting. June thanks her for the home she has made for her daughter. Later, we discover that the Mackenzies did not wish to press charges against June because of this incident.

Back at the Waterford house, Serena confronts Fred in June’s room. Nick is still refusing to let him exit the room, and admits that this is to give June and the baby more time to escape. Serena has harsh words for Fred – saying that she helped June and the baby escape because she wanted a better life for the girl.

When June returns to the house, Serena is pissed that her baby is with Ofjoseph (Emily) – who previously murdered a guardian. Nick is also upset with June for not taking her chance to get away – and reminds her that everyone risked their lives to save her. June is unapologetic. She knows she will probably die in Gilead, but she can’t leave without Hannah.

Emily runs through the woods with the baby and has to cross a river to escape the nearby patrols. She and Nichole are pulled under by the current, and for a moment after they resurface it appears that the baby has stopped breathing. But then Nichole cries again. They are discovered by a Canadian officer and gain asylum.

Back at the house, Commander Waterford comes up with a story to protect the household (and himself). He plans to say that Ofjoseph (Emily) kidnapped the baby and they couldn’t stop her. Serena doesn’t agree with this plan and Fred won’t listen to her. In her despair and outrage, she burns the house down. (Hopefully this foreshadows her burning down the patriarchy?) 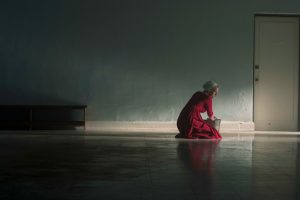 As the house burns, June is taken to The Red Center for punishment after being caught at the Mackenzie’s. Her feet and hands are blistered and she’s made to scrub floors. But she is told by a Handmaid that Emily and the baby are safe. Shortly after this, she is given a new posting with Commander Lawrence. As the episode ends, she promises not to be any trouble. But we all know that won’t last long. She is ready to rebel – and no one is going to stop her. 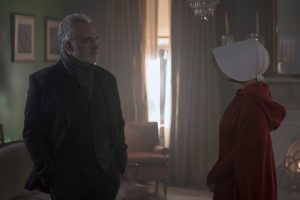 Ofmatthew is June’s new shopping partner. The two don’t get along well – Ofmatthew is pious and judgmental and June has to bite her tongue during their walks together. June exchanges updates with Alma at the store – the Americans are losing Chicago and the Marthas don’t trust the handmaids enough to collaborate on their resistance plans.

Aunt Lydia is visiting when June returns to Commander Lawrence’s house. The older woman is barely able to walk after Emily attacked her – but she’s as cruel as ever. Eleanor (Mrs. Lawrence) is unwell during the visit and her strange behavior causes Aunt Lydia to become suspicious. Before leaving, Aunt Lydia tries to get information from June and then says if it were up to her June would be hanging on the wall.

In another part of the Lawrences’ house, a group of Marthas are conspiring to get one of them out. June has learned that the Marthas conduct most of their rebel activities here. June convinces the commander to allow the extra Martha to stay in the house a few days while they try to get her out. He agrees – but reminds her it’s her funeral if they are caught. At this point, June seems to care little for her own survival. 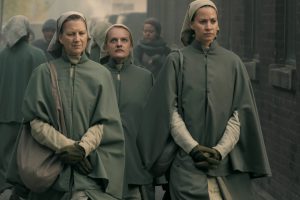 In the meeting of the Marthas, Cora doesn’t want to help smuggle the new Martha out. June volunteers to go in her place. She dresses in their grey clothing and walks with Beth to the other side of town. She learns the Martha they are “getting out” is actually a Chemist headed deeper into Gilead. She specializes in making bombs.

The mission seems successful and Beth and June return home, but the Chemist Martha soon shows up with a companion who was escorting her. Her companion has been shot. Cora tries to lie about the screaming from the basement to Commander Lawrence, but he doesn’t believe her. June comes clean. They avoid being caught by the guardians who are searching for the injured woman, but the companion Martha dies from her wounds. Chemist Martha escapes with June’s encouragement. Discovering the dead woman in his home, Commander Lawrence tells June he regrets taking her in. He tells her to clean up the body. Cora is sent away for lying to him about the incident.

Meanwhile in Canada, Emily is struggling to transition. She has met up with Luke and Moira, but has avoided reuniting with her wife. Luke isn’t sure how to feel about the new additions to the family. It’s hard for him to care for June’s baby and he can’t understand how Emily could wait to contact her family. As the episode ends, Emily finally calls her wife and both cry at the sound of the other’s voice.

Beth, June, and the new Martha Sienna prepare for the Commanders to visit the house. Apparently Commander Lawrence refuses to commute for meetings, so they must all come to him. Beth and June discuss what may have happened to the former Martha Cora after she lied to Lawrence. June doesn’t think she was hung – so they speculate that she could have been sent to the colonies. June resolves to make powerful allies in order to survive in Gilead. 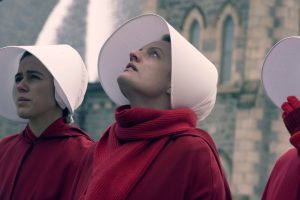 When the Commanders arrive at the house, June privately asks Commander Waterford to share what he knows about Commander Lawrence. She also thanks him for not having her killed for her crimes in his house. Waterford, charmed as always by June’s flattery, says Lawrence doesn’t like to be bored. Lawrence spots the two chatting, and is immediately suspicious of them.

The Commanders are meeting to discuss the fate of the women from Chicago, which has officially been taken by Gilead. Nick is at the meeting – he’s been promoted to Commander.

Meanwhile, Serena and Rita are staying with Serena’s mother. Her mother arranges a prayer circle because Serena is still mourning the “kidnapping” of Nichole and is struggling in her marriage. Serena is upset about the surprise prayer circle, and tries to talk about her marriage with her mother. He mother insists that she doesn’t care what happened between them, there is no place in the world for Serena without Fred. She has no sympathy for her daughter’s circumstances. 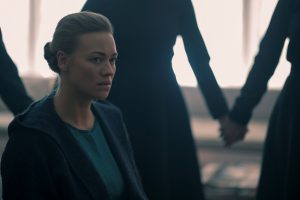 Commander Waterford spends some time at Jezebel’s, practicing a speech he hopes will appease Serena. We learn that he was demoted as a result of the many scandals in his home.

June tries to ally with Commander Lawrence, but it backfires. He sees through her attempts to flatter him, and explains that he only saved Emily because she could be useful to the world. He tells June that his work in creating the system behind Gilead is saving the planet and the human race. He says she’s stupid and useless, and she fires back by trying to make him feel ashamed of the world he has created.

In response to her harsh words, Lawrence drives June to the warehouse where the women from Chicago are being kept. He shows her the cages full of women – all bound for the colonies where they will die serving as laborers. All except five – who will be made Marthas in Gilead. He tells June she must read their files (the “binders full of women”) and pick the five to survive or they will all be sent away. She refuses, telling Commander Lawrence that if these women die it will be his fault – not hers.

Nick visits June to say goodbye. Even though he is a Commander now, he can’t help her get Hannah back. He’s being sent to the front lines of the battle in Chicago. At first June’s response to this is cold. She’s upset that he can’t help and certain he will die. Then they lock themselves away for one last proper goodbye. (Though we don’t see what happens behind closed doors, we have to wonder whether another little June and Nick could be in their future.)

Serena visits June – but her intentions in the meeting are unclear. She wants to know if June thinks of her missing child often. Serena can’t get Nichole out of her head. June says she thinks of Hannah every minute. Then June tries to convince Serena that she can do more to help women reunite with the children that were taken from them. It is unclear what Serena thinks – but later, when given the opportunity to warmly welcome Fred back into her life, she can’t even look at the man. And while she previously tried to conceal the finger she lost while trying to stand up for baby Nichole, she now shows her battle scar to the world.

In the last scene of the episode, June tells Beth that she has chosen five new Marthas for the resistance – an engineer, an IT tech, a journalist, a lawyer, and a thief. She gives the files with her selections to Commander Lawrence, deciding to participate in his game after all.

These first three episodes have set the tone for a whole new Handmaid’s Tale. These women are less afraid, have less to lose, and are ready to (literally and figuratively) burn down the system that oppresses them – from the inside. Catch new episodes each Wednesday on Hulu and recaps right here on Hollywood News Source!