Want to get caught up on the latest episode of The Handmaid’s Tale? You’ve come to the right place! Check out our recap of season 3, episode 9 below. 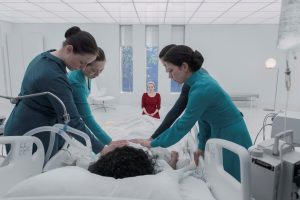 In the previous episode of this season, June was involved in Ofmatthew’s bullying before her shopping partner’s breakdown. As punishment for this, Aunt Lydia has forced June to kneel by the unresponsive woman’s hospital bed until her baby is delivered. June has been here for weeks – and she is losing touch with reality. Doctors care for Ofmatthew’s body so her baby can grow, even though they don’t expect her mind to recover after her injuries.

So far, June has been here for 32 days. Offmathew has visitors. Wives praying. Handmaids praying. Janine’s face is still healing after being beaten by Ofmatthew in the store. 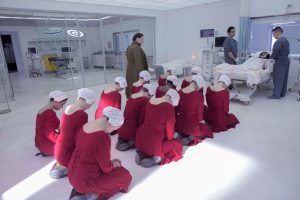 June watches people pass in the hallway behind Ofmatthew’s bed. She thinks she is imagining girls in pink stopping by to look in the window. She kneels for so long that her leg muscles are weak and her knees have sores on them. One night, she squeezes an oxygen tube connected to Ofmatthew until an alarm brings doctors to the woman’s bedside.

The doctor who performs surgery on Ofmatthew is heartless and cold in his treatment of her, caring only for the baby. June watches it all. Ofmatthew has seizures. June begs Aunt Lydia to let her leave the hospital and tells her she doesn’t feel well. Aunt Lydia refuses. June prays for God to let the baby and Ofmatthew die.

June picks a scalpel out of the biohazards box in the room. It was used on Ofmatthew earlier that day. She wants to slit the woman’s throat. But Janine comes in. She is staying in the hospital because the injury to her face has become infected. Janine thinks because she hasn’t been praying for the woman that she has caused Offmatthew’s seizures. She stands by the Handmaid’s hospital bed and says that she forgives her and wants her to find peace. June shows her the scalpel she has hidden and says she wants to help Ofmatthew. Janine tells June no. She tries to get June to give her the scalpel. June refuses. Janine tells June that she can see she has changed – and she doesn’t like it. 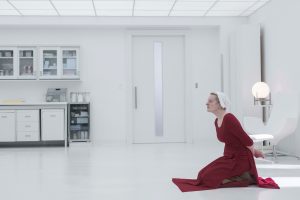 On another day, June kneels as Commander Matthew Calhoun and his wife hear a report about the baby. As they talk, the doctor mentions that the girls in pink looking through the window are here for their menarche exam. In a few years, the young girls will be ready to have babies. June thinks of Hannah. She must be nearing that age. She clutches the scalpel behind her back and contemplates who in the group to stab just as Serena walks in. Serena is here to visit the family and apologizes for not coming sooner.

As everyone heads to the doctor’s office for a more detailed report on the baby, June asks to speak to Serena. Serena immediately sees she is unwell. June plans to stab the woman but clumsily gets to her feet with weak muscles. She manages a cut on Serena’s arm before Serena removes the scalpel from her grasp and June falls to the floor with a cut on her hand. Serena is shocked that the Handmaid who once was so strong is now so frail. She tells the doctor that June cut herself, and he comes in to check on her. 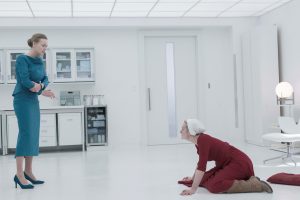 The doctor sees the scalpel on the floor and places it back in the biohazard box. He stitches up June’s hand. They talk about her mother. He knew Dr. Maddox – she was a fierce woman, and stubborn like June. June admits to the man that she wanted to kill him, and Serena, and Ofmatthew. He sighs and says he knew being in the hospital room for months on end would drive her crazy. But no one listened to him. He asks how long she’s been suicidal. She says probably since she realized she’d never see her daughters again.

That night, alarms go off in the hospital room and June sees that Ofmatthew is bleeding. She watches the C-section from behind a glass wall. The tiny baby boy survives the premature delivery. Doctors in training stitch Ofmatthew up. They all know she won’t make it much longer. June continues to watch her former shopping partner through the glass. 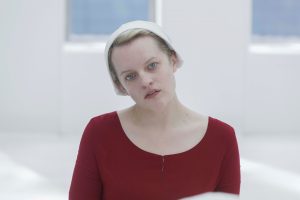 The next day, she is allowed to take her suitcase and leave the hospital. June talks with a young girl in pink named Rose in the hallway. The young girl says her exam revealed that she can have babies once she is married. June asks her if that is what she wants – and Rose says of course she does.

Aunt Lydia meets June outside the hospital, and they see a line of girls enter alongside Wives. June suddenly realizes that Hannah will have to pass through those doors one day soon. And she should be at the hospital when she does. It might be the only chance she has to see her daughter again. She asks Aunt Lydia if she can stay at the hospital until Ofmatthew passes away. Aunt Lydia is surprised but probably imagines that this is a good thing for June. The Handmaid has finally come around and wants to make amends for her previous sins. She allows the arrangement.

In the final scene, Aunt Lydia visits Janine after her procedure and gives her an eye patch to cover her scars. The Handmaid is overjoyed by this. Meanwhile, June sits beside Ofmatthew and talks to her, apologizing for her behavior. She tells the unconscious woman that her son is okay and she promises to help him get free. Along with as many children as she can.