We’re getting ready for the next episode of The Handmaid’s Tale! If you missed last week’s episode or just need to jog your memory about what happened – check out our recap below! 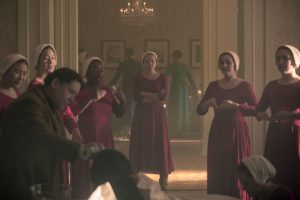 Before we jump into episode 8 of season 3 – let’s recall what happened at the end of episode 7. June lost it with her shopping partner Ofmatthew and openly attacked the woman in the street. This was after Ofmatthew ratted on her to Aunt Lydia about talking to Hannah’s Martha – Frances. Frances was publicly executed. Hannah and the MacKenzies have been relocated. And June is still really, really pissed off.

At the beginning of episode 8, the Handmaids are attending a birthing. Ofandy is pushing, and the other Handmaids are providing moral support under the watchful eye of Aunt Lydia. Several of the Handmaids have taken June’s side, and are harassing Ofmatthew at every opportunity. Bumping into her, spitting in her water, and knocking over her things. June watches and smiles but otherwise doesn’t participate in either the birthing ceremony or the bullying. Janine feels sorry for Ofmatthew, and tells June they shouldn’t be so mean. After it is determined that Ofandy isn’t quite ready to deliver, Aunt Lydia orders June to have her friends stop the bullying – but June refuses. 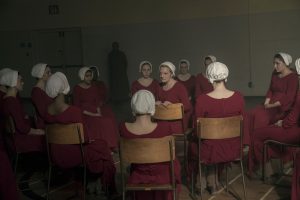 In response to this disobedience, Lydia takes the group to The Red Center, where June is put in the circle of shame to testify about her wrongdoings. The other Handmaids point at her and list her sins in unison. But June quickly turns the shaming around on Aunt Lydia and Ofmatthew, saying that her pregnant shopping partner doesn’t want her baby. Ofmatthew takes her place in the circle of shame instead and is very upset by the ritual. The smile returns to June’s face. She is enjoying the other woman’s pain.

We get to know more about Aunt Lydia through several flashbacks in this episode. She was formerly a teacher – Ms. Clements. She seemed to truly care about the children and families she worked with. As a deeply religious woman, she tried to help those who were struggling – in her own way. This included a young student and his mother, whom she treated to dinner at her house when she saw that the single mom was struggling to juggle work and raising her son. 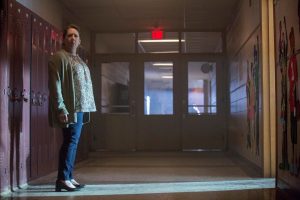 Back in the current timeline, June asks Commander Lawrence about what happened to Hannah and the MacKenzies. He doesn’t know, doesn’t know anyone who does, and tells her never to ask him about it again.

That night, June and the other Handmaids return to the birthmobile and witness Ofandy giving birth. But the baby girl does not survive. The Wife and Handmaid are devastated. Aunt Lydia takes Ofmatthew from the room, as the pregnant woman is very upset. The other Handmaids embrace Ofandy and grieve over the lost child, but June looks numb. She looks at the dead child until she is urged to join the other Handmaids.

In another flashback, the mother and son we met before celebrate Christmas with Aunt Lydia. The mismatched group’s love for each other is obvious. The young mother encourages Lydia to go out and meet someone special. Lydia shares that she has been alone since her divorce from a man who wasn’t right for her.

Lydia goes out on a New Year’s Eve date with a co-worker. She reveals that she used to practice family law. The date stretches her far outside her comfort zone. At the end of the night, she feels rejected when her date isn’t ready to take the next step. Afterward, she is upset with him and with the woman who encouraged her to be vulnerable. She reports the young mother, Noelle, to law enforcement – claiming that her son has been neglected. The coworker she went on the date with clearly disagrees with this. But the child will be removed from his home. As we know, this is all a precursor to the formation of Gilead. There are lots of families who can’t have children, after all. So why should this mother be given a second thought? 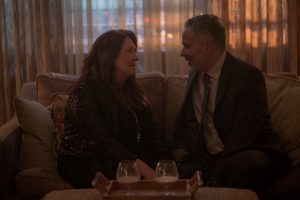 Back in Gilead, a group of Aunts work on matching Handmaids to families. Aunt Lydia complains about Ofjoseph. The others say that she is a bad apple. After some thought, Aunt Lydia claims that June isn’t truly a bad apple. Rather, the Waterfords were a bad barrel – a corrupting influence on a woman who never gave them trouble before she was placed in their house. The fact that the Lawrence household is so unconventional isn’t helping matters, either. And Aunt Lydia wants to protect Ofmatthew and her child from June’s influence.

Aunt Lydia finds June in the store and asks for a word. Behind them, June watches as Janine tries to comfort Ofmatthew, who is clearly distressed. Aunt Lydia tells June she wants to transfer her to a new home. But their conversation is interrupted when Ofmatthew snaps. She attacks Janine, beating her to the ground with a can. Then she goes after a guard – taking his gun. She points it at Aunt Lydia as June watches with a smile, enjoying the woman’s meltdown. But Ofmatthew is shot before she can pull the trigger. Guards drag her limp body from the store, as Aunt Lydia reacts in horror. 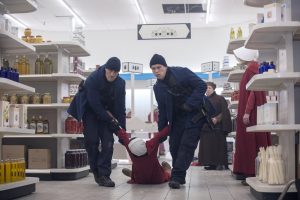