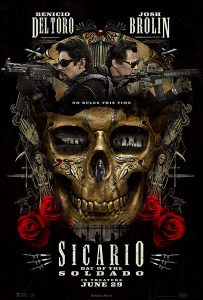 Sony was kind enough to send me a movie I wanted to watch when it came out but missed in the theaters, “Sicario: Day of the Soldado.” I was hugely enthusiastic about the first film in this franchise, “Sicario” so I was anxious to receive the DVD to watch for this review. Before we go any further, it is important to know is that Emily Blunt is not in this movie. If you are hoping to see her continued evolution as an FBI agent, be prepared for disappointment. However, if you are more excited to see Josh Brolin and/or Benicio Del Toro, then my friends, you are about to experience so much joy.

If you’ve seen the first movie, you will remember the story follows Kate Macer (Blunt), an FBI agent who is tested personally and professionally as she steps into the world of Mexican drug cartels. The movie is shocking, violent and intense but it also feels real, like you are getting a glimpse into a dangerous world which runs parallel to our own relatively privileged American lifestyle. Blunt’s character is Us as she discovers a darkness that infects everyone and everything it touches, in some way. Two people key to her introduction are Alejandro (Del Toro) and Matt Graver (Brolin). Alejandro is a former lawyer who goes rogue after his entire family is murdered by cartel hitmen. He is so good, and so lethal, that he needs no last name. Say “Alejandro” and everyone knows bad news is on the way. Matt (if that is even his real name) is a… well, that’s kind of unclear but I believe he’s an agent so deep into Black Ops that he now only exists to sniff out drug lords and take them down. He and Alejandro make a good team and they regularly kick ass and take names. They spend the first movie showing Kate all the evil that exists in the Mexican drug wars and the dangers the cartels pose to Americans which is considerable (not even counting the danger of the actual drugs). The tricky part of the sequel was to deliver the same amount of intensity and potential threat using these two supporting characters in the absence of the original movie’s key character. How did they do? 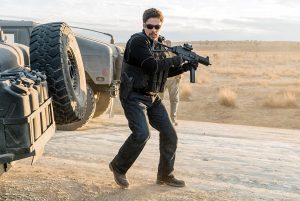 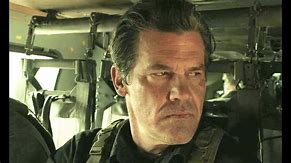 I think they did well. The story mainly follows Alejandro as he continues his quest to stop the cartels. There is still the gunfire and explosions and blood and gore we saw in the first film, but, as in “Sicario,” it does not feel gratuitous. The story feels honest and uncomfortable because it hits close to home; closer than some believe. Without Blunt’s character to guide and teach, Alejandro and Matt do not need to explain their actions or help us (the viewers) process what we are seeing. They just act, and we have to decide how we feel without explanation or the filter of Blunt’s character.  In case the cartels aren’t scary enough, the movie escalates the danger by adding the notion of terrorists joining forces with the cartels or using them as a front to distract American agents while they (terrorists) enter the country from the Mexican border. I hate to be the bearer of bad news, but according to one of the special features included on the DVD, the idea of terrorists using the Mexican border to enter America was based on an actual event. Damn it.

In my humble opinion, this is not a kid’s movie. I’ve mentioned the death and violence, but did I make it clear that there is A LOT of death and violence? There are difficult discussion points that you may not want to engage in with your kids, depending on their age and maturity, such as border control, illegal immigration (and the reasons for it), terrorism and the situationally blurred lines between who is good and who is bad. 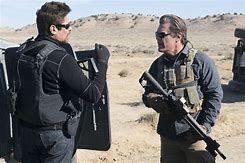 Here are the special features included on the DVD:
• From Film to Franchise: Continuing the Story
• An Act of War: Making Sicario: Day of the Soldado
• The Assassin and the Soldier: The Cast and the Characters

The special features were well done and really added to the overall story. In “From Film to Franchise” the writers and producers discussed how they developed the story with the major differences I’ve already mentioned. They also discussed the real-world events that influenced the story, which I found fascinating. If you are the person that wants to know how they did the incredible stunts or filmed the ambitious action sequences, you will really enjoy watching “An Act of War.” Finally, in “The Assassin and the Soldier,” character development and their stories is examined. For me, these three special features really added to a story I was already invested by giving me context for the movie in our real world but also context for the characters’ actions in their movie world. All in all, I recommend the movie and the DVD! The DVD can be yours beginning October 18th!