Meet the new royal family of the supernatural world The Allen’s. From Netflix based on the IDW graphic novel by Steve Niles, comes this new tale and spin in the world of warlocks, witches, werewolves and vampires. 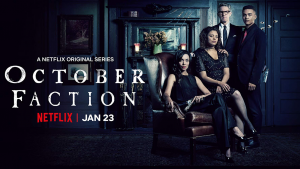 The story starts as the Allen’s return to the small town of Barrington-On-Hudson upstate New York they left over 30 years ago. They return for the funeral of the family patriarch and Fred’s father Samuel Allen (played by Stephen McHattie) Frederick returns with his Wife Deloris and twins Viv and Geoff from Japan.

To the rest of the world and their children they work in insurance, but in reality, they are elite highly trained hunters of all things supernatural and evil for a mysterious organisation named Presidio.

Featuring a talented cast of Canadian performers, the season provides various revelations, twists and turns that will change the dynamic of the Allen family and town of Barrington-On-Hudson forever going forward and open old wounds, which will question allegiances, and will make you question who are the real monsters and heroes of our world.

October Faction doesn’t shy away from subjects such as sexuality, racial issues, betrayal and meets them head on without apology with a combination of horror and adventure full of surprises and twists. 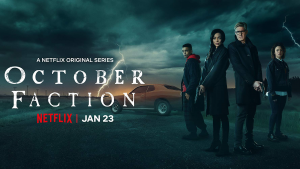 Deloris Allen played by Tamara Taylor (Altered Carbon) she is the glue that holds the unit of the Allen’s together, she also has her own demons to face from her past, literally and figuratively, before embracing her new future with her family, A formidable hunter in her own right her skills and experience will be needed.

Frederick Allen played by J.C Mackenzie (The Wolf of Wall Street) the other half of the monster hunting duo with his wife Deloris, Frederick has the challenge of having to come to terms with his family legacy from the past, present and future and the consequences of it, which have impacted him for years and will affect his wife and kids until he faces those fears.

Geoff Allen played by Gabriel Darku (Slasher) is the brother and twin of Viv. Highly confident, smart, often sarcastic, this sometimes is used as a shield to protect himself from facing his fears and insecurities as he finds life changing things about himself, much more than he bargained for.

Viv Allen played by Aurora Burghart (Sex Education) she is the sister of her twin Geoff. Talented artist, outsider, great instincts, struggles with the balance of being a teenager and fitting in, while learning about whom she really is. Viv will discover that she is capable of far more than she ever imagined.

Maggie Allen is played by veteran and gifted Canadian actress Wendy Crewson (Saving Hope) Introduced as the devious, smart, manipulative matriarch of the Allen family, mother to Frederick and grandmother to twins to Viv and Geoff Allen. Maggie who has a fractured relationship with her son Frederick, and slight conflict with his wife Deloris. Maggie knows far more then she lets on while doing it with wit, which will show everyone how formidable she can be.

October Faction is currently available to stream on Netflix.