Alex Rider the new series based on the book series by Anthony Horowitz was at MCM Comic Con London 2019. 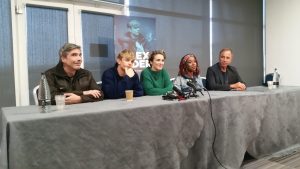 After a panel which showed clips from the show, several of the panellists came to speak with the assembled press and take questions. The panel for the interview featured Otto Farrant, Vicky McClure, Ronke Adekoluejo, Guy Burt and Anthony Horowitz. The Alex Rider series has yet to be picked up a channel but judging by the quality of the clips it is only a matter of time.

Catch up with all the MCM Comic Con London coverage on our YouTube channel.