Missed the show on Sunday or just need a refresher? Here’s what went down on the antepenultimate episode of Game of Thrones.

The Battle of Winterfell has been won – but at great cost. The second half of season 8 begins with an enormous funeral for the dead. There are several shots of our fallen heroes, notably Jorah and Theon – whom Daenerys and Sansa are spotted grieving over. John says a few words to honor those lost in battle, and the pyres are lit. 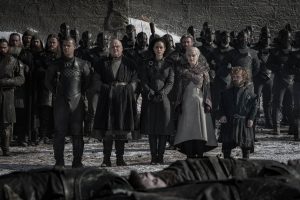 After the funeral, the feast begins. There is a great deal of joy and drinking, and congratulatory behavior that reminds us all that Jon is still everyone’s favorite leader. (There’s also a brief cameo by a Starbucks cup at the feast – and the internet can’t get enough of it.) Daenerys steals the show for a moment to grant Gendry the title of Lord of Storm’s End, after revealing publicly for the first time that he is the son of the late King Robert. Gendry leaves the feast to tell Arya about the news and propose to her – but she politely refuses his offer. Even if he is a lord, she is not a lady.

Back at the feast, Tyrion and Jaime convince Brienne to play a drinking game with them. Everyone else is happily pairing off. Left and right, couples seem to have a serious drive to repopulate the northern armies. The Hound refuses the advances of a few ladies, but Pod wanders off with a woman on each arm. Jaime follows Brienne to her room, where she admits to being a virgin before they have sex. Tormund is briefly disappointed that he was unable to win Brienne’s heart but satisfies himself with another woman. And Daenerys finds Jon in his chambers, but their passion dies quickly as Jon seems to remember that he’s hooking up with his aunt. Instead of heading for bed, the two argue over whether Jon should tell his “sisters” about his true identity. Daenerys knows the information will spread like wildfire, with many favoring him for the throne. He decides to tell Arya and Sansa the truth anyway but swears it won’t change Daenerys’ status as Queen. His sisters will keep the secret. (As usual, he knows nothing.) 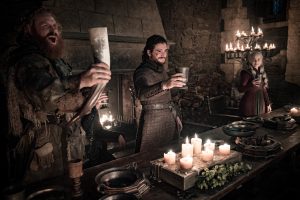 After celebrations are done, we finally glimpse some progress on the game of thrones. Daenerys wants to head to King’s Landing right away, but they have word that Cersei has moved a bunch of people inside the capital’s gates “for protection” – so any attackers will have to slaughter them before taking her crown. Sansa fails to convince Daenerys that they should let their troops rest, so a plan is made for the Queen to take her dragons and a group of ships to Dragonstone while Jon leads a separate group to King’s Landing. (Exactly why they need to split up is unclear. But what could possibly go wrong?)

Bronn shows up with a crossbow to tell Jaime and Tyrion that they need to make good on their promises to him if they don’t want to be murdered. Tyrion agrees to make him Lord of Highgarden, beating Cersei’s offer to make Bronn Lord of Riverrun. (And with this promise – it seems almost certain that one or both men will be dead before the bargain is done.)

Goodbyes are said at Winterfell before the troops depart. Tormund is tired of being so far south and plans to head back beyond the wall. Jon tells him to take Ghost with him. Sam and Gilly tell Jon they are expecting a baby. Sansa shares the secret of Jon’s identity with Tyrion. Once the troops are gone, The Hound sets out alone – but Arya quickly catches up with him. They both have business at the capital. He needs to kill his brother, and Arya needs to cross Cersei’s name off her list. Not long behind them is Jaime – who breaks Brienne’s heart by leaving her when he receives word of Cersei’s latest scheme. He rides away with a speech that leaves his true intentions up for debate – he is either going to help his sister or murder her. (I know which option I’m rooting for.)

As the small fleet of ships from Winterfell nears Dragonstone, they are greeted by the Iron Fleet – with Euron at the helm. The fleet’s weapons make quick work of another of the dragons, plunging Rhaegal into a watery grave. Daenerys is able to escape with Drogon, but the troops have to jump ship and swim to shore as Euron and his crews lay siege to their boats. When they all come up for air, Grey Worm realizes that Missandei has been captured. 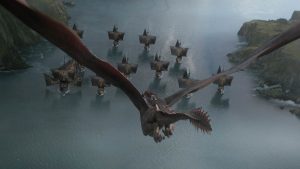 In the throne room at Dragonstone, Tyrion and Varys have a traitorous chat about whether Daenerys is fit to rule. Tyrion still thinks she is the best person for the job, but Varys disagrees – he seems to want Jon on the throne instead. He has already told the queen directly that he disagrees with any plan that puts innocent people at King’s Landing in danger. And he seems prepared to prevent her from winning the throne if necessary.

At the end of the episode, the troops and leaders are finally gathered at the capital. Each queen insists that the other should surrender, or pay the price. Cersei stands atop the wall with Missandei chained in front of her, and her archers stand ready to put an arrow in anyone who steps out of line. Despite this threat, Tyrion and Qyburn meet at the center of those gathered to discuss a possible resolution. When it quickly becomes clear that there is no chance of peace, Tyrion makes a direct plea to his sister to surrender. If not for her people, at least for the life of her unborn child. (Shortly before, Cersei told Euron that the child was his – though if she is pregnant it is almost certainly Jaime’s baby. Euron reacts to the fact that Tyrion knows about the child with appropriate confusion.) Cersei responds by asking Missandei if she has any last words. Missandei looks to Daenerys and says only “Dracarys” – a clear call for her dragon queen to avenge her by burning everything and everyone to the ground. The Mountain then beheads Missandei, her body falling from atop the castle wall. 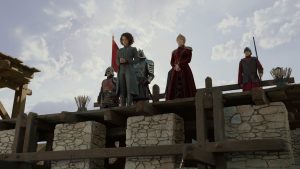