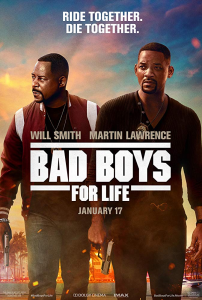 As soon as you hear that iconic theme song play (Bad Boys), originally performed by reggae band Inner Circle in the 90’s and finally back on screen, you know you will be in for a ride. It has been 17 years since Bad Boys 2. Will Smith (Men in Black) and Martin Lawrence (Big Momma’s House) return to the roles that made them stars, as detectives Marcus Bennett (Lawrence) and Mike Lowrey (Smith) of the Miami Police Department, causing havoc and mayhem while catching the criminals with wit, humour and swagger.

The Miami law enforcers return for a third outing. Though now older and not always necessarily wiser, Smith and Lawrence don’t lose a step catching the magic of the original Bad Boys (1995) with the same outlandish in-your-face humour, and visceral action as it had then. It doesn’t shy away from one of its main themes of brotherhood and family through adversity, as Mike Lowrey (Smith) encounters ghosts and secrets of the past that come back to haunt him in the present day.

Secrets that his Detective partner Marcus Burnett (Lawrence) does not even know about his best friend that pre-date before the events of the original film, this tests the limits of their friendship all the while dealing with a ruthless cartel out for revenge. They are both forced to come to terms with their own mortality with Burnett being now a grandfather considering retirement and Lowrey (Smith) beginning to question his legacy as a now veteran gunslinger of the law.

I won’t spoil the revelations discovered, but they will effect every character involved in the Bad Boys franchise. A nice call back is the return of the constantly stressed Captain Howard played by Joe Pantoliano (The Sopranos), Theresa Randle (Space Jam, Bad Boys) as Theresa Burnett, and also including fresh new faces Vanessa Hudgens (Spring Breakers), Alexander Ludwig (Vikings), Charles Melton (Riverdale), Paola Nunez (The Son) and Kate del Castillo (Jane The Virgin).

This nearly didn’t happen, as Will Smith mentioned during their tour and promotion of Bad Boys for Life in Los Angeles. Martin Lawrence picked him to be in the original Bad Boys (1995) as he was cast first, when Smith was a young up and coming star. This can be found on Will Smith’s official YouTube channel.

Will Smith said “A lot of you guys may not know but the first movie Martin had Bad Boys, and the studios and producers asked him who he wanted to work with? and Martin picked me for the first Bad Boys, so I want to thank you for that one.”

Look out for a standout performance from young British actor Jacob Scipio, along with young directors Adil El Arbi and Bilall Fallah at the helm.